Still writing my "minimalist" Dark Fantasy Hack, as we've mentioned in part I.

I tried MANY complex ways of fixing initiative in the past, as you can see in this blog - and I've found it is not especially useful, realistic or fun.

First, initiative DOES nothing. You roll a dice to see when you'll have the right to roll another dice, and then MAYBE accomplish something.

If you win initiative and miss your roll, nothing is accomplished (and you rolled twice for nothing). If you lose initiative and one side wins before your turn (or you're taken out), it is just frustrating. If a monster loses initiative and gets attacked by the whole party it can be taken out without even appearing menacing.

Of course, whoever loses initiative can at least react to everyone else's actions... which doesn't make much sense.

And when initiative does something fun - you win initiative, and you hit, AND you roll well for damage - is lots of rolls and calculations where ONE would suffice.

If you use initiative just to give some semblance of order to combat, that's understandable. But do you really want to turn combat into an orderly affair instead of something unpredictable and chaotic? Is it really a good idea?

Anyway, IF that is the case, I'd use side initiative - one "side" acts, in any order they wish, then the other side. Or just let everyone act in order of Dexterity, without even rolling.

But wait - Dexterity? Why? Why would a wizard or sorcerer need to be agile to cast a spell first? Dexterity covers a LOT of unrelated things already - picking locks, dodging, shooting arrows and (gasp!) even playing stringed instruments in 5e. Why does quick-thinking need to be included in this unholy hodgepodge?

Now, imagine a 11th level orc fighter with Dexterity 10 (in 5e for example). She can attack THREE TIMES in a turn, or SIX TIMES with action surge (seven, with light weapons). Why would the 1st level rogue with Dexterity 16 be able to attack before ANY of the seven attacks?

(In fact, 5e DOES realize this and attempts little "fixes" such as giving initiative bonuses to champions and barbarians. But this shouldn't need fixing in the first place. If you're a good fighter, you should master your timing in combat by default).

What if we inverted this rationale?

A competent fighter attacks fast. A competent wizard casts a spell before the low-level ranger can act (unless we are interrupting spells, but that's a different matter). However, the old wizard CANNOT throw a punch that quickly!

In short - how fast you act depends on what you want to do.

But then you must DECLARE what you'll do BEFORE you roll, which makes PLENTY of sense. 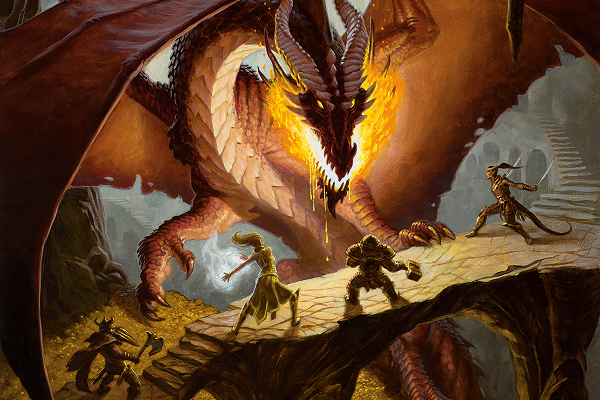 EVERYONE says what they'll do. Ogrok the barbarian attacks the dragon. Maellus prepares a spell. Melfin draws his bow while moving behind a rock. The dragon inhales, ready to breathe fire over all of you! Oh my!

NOW everyone rolls at the same time.

Ogrok rolls best! Then the dragon, Maellus and Melfin.

The barbarian flanks the dragon and attacks before it can react, causing massive damage. The dragon  breathes fire, but now the barbarian moved to the side, and he chooses to toast the barbarian instead of the rest of the party. OR: the dragon already chose where to attack (and thus cannot change the action), and burns the other two before they can act!

And what if Melfin rolled a 1? Well, he knows shooting the dragon will lead to failure, but he declared his action already. Maybe he can change it, for some price? Or maybe his roll meant he also failed his saving throw and is badly burned? Maybe he has more than one dice to roll with many attacks?

I don't know, there are many specifics to think of.