Krevborna is the deal of the day!

Krevborna: A Gothic Blood Opera* is the deal of the day on DTRPG.
If you like Ravenloft. Bloodborne, or gothic horror and dark fantasy in general you must check this one out. If you follow this blog, this is right up your alley.
The author is Jack Shear, from Tales of Grotesque and Dungeonesque. He writes both OSR and 5e D&D stuff, and this book will work for any system.
I've played an AWESOME Krevborna campaign with him years ago, BEFORE the book, and he was kind enough to mention my name in page 2. Unfortunately, we lost touch after the demise of G+.
Anyway, I bought the final product and I love how it turned out! It is interesting, evocative and useful.
In short, this one is highly recommended! 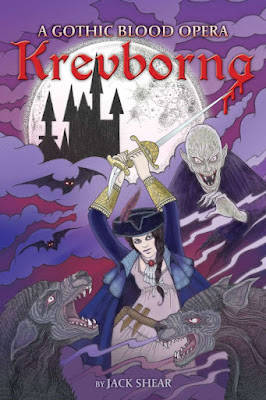 The blood moon rises above the haunted lands of Krevborna! Once a country of picturesque villages, deep forests, and sublime mountain ranges, Krevborna is now a land of Gothic ruins preyed upon by fiends, ravening beasts, and the unquiet dead. Shadows triumphantly lengthen across Krevborna; the great powers of darkness work to usher in the dread dominion of an everlasting empire of night.

*These are all Affiliate links - by using them, you're helping to support this blog!