This is the last post (at least for now) in a series about using dice in D&D (you may wish to read parts one, two and three). In this part I'll talk about some house rules for dice pools that I use in my games.

As I said in part two, one thing I really like about dice pools is the tangibility of dice. If you use multiple dice, you can assign a different meaning to each one - one die for skill, another for advantageous circumstances, and so on. You can do the same even after rolling, picking any extra dice left on the table and adding qualities to your success (or failure): more damage, more flair, less time spent, and so on.

You can also move dice around in lots of ways. If you use fate points, hero points or a similar mechanic you can have dice of different color in lieu of chips. Instead of granting a bonus to another player, you can pass a die to him. There are also ways you can move dice from one skill to another or from the attack roll to damage - adding a little risk-reward mini-game in which you can trade dice (before rolling) for a more impressive result in case of success.

The tangibility makes bonuses, skills and circumstances feel more relevant, more "real". When you use lots of dice you can physically see the resources and talents you are putting into a task. A stronger opponent can be recognized not only by an numerical bonus, but by a obviously bigger dice pool.

For me, what is really important about the system I'm using isn't that it makes you think about such things: it's the exact opposite. Moving dice around this way feels easier and more natural than calculating margins, bonuses, skills, modifiers, and so on. It doesn't require much thinking.

To build a dice pool, you can start with the usual die (I use a d20 or 3d6) and add more dice for each skill, proficiency, advantage, background, special equipment or other resource the character has at the moment. I will write more about how my house rules for such things in separated posts - basically, I use a bonus for BAB or ability but extra dice for skills and circumstances - but you can use dice pools with your own, of course. 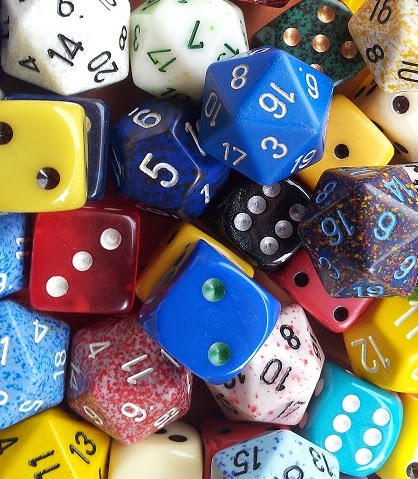 There are multiple ways of using a dice pool system for D&D. Of the many options, two immediately come to mind: d20s and d6s. A d20 dice pool seems natural because the d20 is the prototypical D&D die, and because the current edition of D&D uses a couple of d20s in some circumstances. A d6 dice pool, on the other hand, has the advantages of availability and price (all the more important when using handfuls of dice), and has been used since Chainmail in some situations. Both are good, so let's see how we can use each. Bear in mind that the examples below are for illustration and inspiration, as I haven't tested them extensively enough to say the math is 100% solid.

When using multiple d20s, picking just one for the result is usually easier than adding them up, so you don't have to solve things like 17+9+15, which might take more than a couple of seconds. Just find your target number (I'll use "TN" for the number you must roll to succeed), and see if any die is higher than it - if it is, the task was successful. If many dice were higher that the TN, each extra die beyond the first adds new qualities to the roll (more damage, help a friend, less time spent, etc). If the TN is greater than 20, you must roll at least one 20 and you can add a flat bonus to each extra dice that is higher than a given threshold - say, add +5 for each dice that rolled 10 or more.

You can do something similar with d6s. This time, you add them all together, but you must start with the lowest numbers in the pool. Each die that is left after you reach the TN adds a new quality to the roll.

In both cases, it is useful to have "exploding" dice to allow the higher TNs to be reached. For every d20 and for every couple of d6s that come up with the maximum number, I'll add another die to the pool. On the other hand, a "natural 1" only happens if all dice come up as one, which will make catastrophic failures very rare for skilled characters in advantageous circumstances.

If you want a rule for disadvantageous circumstances, just subtract dice from the pool until there is only one d20 or 3d6 left. Further negative circumstances make you add more dice and the using the worst d20 (or the worst 3d6). If you fail, each additional dice you would use to reach the TN now creates a negative effect. For example, if you need to roll 15 and you roll 7, 9 and 16, you must take the 7 (a failure) and the 9 would add negative effect (the character falls prone, drops an item, etc).

So, there you go. This is my take on the dice we use for D&D, at least for the time being. What is yours?
Postado por Eric Diaz às 10:02 AM