This week, I approached my group with an idea: trying to go all the way old school, as I haven't done in a long while. Needless to say, the exact meaning of "old school" varies from person to person, and my own ideas about the subject are something I'm going to discuss in future posts. For this session, here is what I proposed: every player would start with three characters, all level 1, 3d6 in order, and they would try to survive my one page dungeon.

The chosen flavor of D&D was... not a specific one, really. I didn't think I would need many rules other than d20+Fighter level to hit, or roll 3d6 under ability for skills, etc. As for the rest, I would make things up as we went.

Character creation was quick and fun. The players - not very used to random characters - had no problems in doing it. I was quite impressed, in fact - when I said "you can choose a couple of skills, anything you want", and "pick any class", that was enough information for them. It all goes back to D&D as lingua franca, I guess.

When rolling characters, some players had terrible luck while others rolled very well, making the whole group unbalanced from the start. They were all very cool about that, no complaints at all. Even so, I gave a few levels and perks to the weaker characters to make things more equal. That was my first mistake.

They chose a few characters to be wizards and clerics. I said each of them would pick a single spell per level. Any spell. I just made them up on the spot, and came up with a system so they could use it more than once a day, instead of the "limited" original version. That was my second mistake.

Finally, I just added a few house rules to increase survivability, making the transition a little easier. A few extra HP, a merciful save vs. death system, ignoring encumbrance for those who wore leather or less, and so on. That was my third mistake (but, alas, not the last one).

The game itself was tons of fun, at least for me. I promised high lethality (another thing my group isn't used to at all- most of our campaigns last for years without a single player character dying), and would show disappointment (jokingly, I think) as the characters survived fight after fight, but the players just laughed at it instead of feeling adversarial. 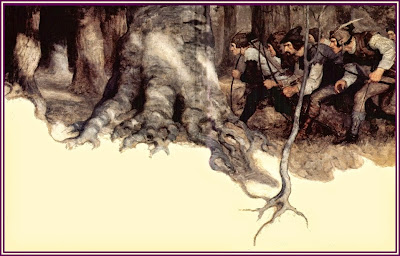 They had no problem playing the game with very simple rules and lots of rulings. A wizard preferred to avoid casting spells (my system's fault), so he fought valiantly with his dagger, even after coming close to death a couple of times. One of the characters went looking for treasure in a couple of rooms - and one of them was EXACTLY in the room with the most valuable treasure in the dungeon. I tried to avoid much improvisation from my part and use the dungeon exactly was written, but once or twice I would adjust things on the fly - and that was probably my last mistake that evening, as I wasn't happy with some of the adjustments I've made.

A single character died, because the group had awakened the a mutant giant bee and he was the slowest initiative on the room. The other characters let him to die - something I would NEVER expect to happen in our regular games. For me, this was the single most exciting moment, followed closely by the (second) time the wizard got saved from death by a lucky die roll.

My conclusion after the game was that I had underestimated both the capacity of my players to try something new, and the capacity of the characters to survive the adventure. Also, the party was just a bit too big to manage at once with the rules I was using, and the enemies a bit too weak.

After asking for feedback, my players offered some constructive criticism. Most of the rules I came up with on the spot were not that good. I thought they would complain from how the combats were too simple and the characters too weak and random (they didn't get to customize the characters at all), but I was wrong. Instead, the main comments and complaints were:

* The players kinda liked the simplicity of the system - some loved it. If felt "dynamic", "like an action movie", or "like a cooperative boardgame" (and this was said in a positive way). On the other hand, my own rules were less interesting and probably too complicated - although some players said they were hard at the beginning but fine once they got the gist of it.
* They said I haven't delivered in the lethality I had promised, which is true.
* Most players felt a lack of connection and depth to the characters, when compared to the games we used to play (that would usually take a few hours in character creation). One player said character creation was "excellent", but others not so much.

Overall, the results were mixed. As a GM, I had a lot of fun, but, most of all, I feel I've learned a lot from this. Ultimately, I think most mistakes I made was because I tried making things a bit more modern than early D&D. I have my own (very new-school) system to go back to - one that most of the players liked so far - but I still wish to try my hand in this kind of "old school gaming".

What's next? Well, I will give this at least one more try. But, this time, I will restrain myself from making things more "new school". No more half measures. Instead, I'm going full "older than old", character funnel style. 0-level commoners for everybody. No skills, no classes (they can get one when they reach 1st level), few hit points, and so on.