It has often been said that the BD&D fighter is a simple class (at least until level 9, where you have some domain management to take care of). Even though one can mention magic swords, setting spears versus charges, armor choice and so on, it is hard to deny that the fighter is pretty straightforward when compared to wizards, for example.

Some see this as a feature, others think that the classic Fighter is boring. In my opinion, the Fighter can get too simple in BD&D (and the wizard, too complicated, but this is a whole different post).

So here is a more flexible and tactical, but still pretty simple, BD&D Fighter.

First of all, she gets an extra attack from time to time. I prefer doing this in levels 6, 12, and 18, but you can keep whatever progression you're using.

Here is the twist: in lieu of making an extra attack, you can use each one for a number of different things. You can call them "combat moves" if you want.

Choose an option on level 8 and every three levels after that (or just allow everyone to do anything, maybe wit a -4 penalty if they don't have the appropriate "feat". Fighters just do it better - as long as this doesn't overwhelm your players). Say you have three attacks, total. You can make three attacks, one regular attack and one attack with extra damage, or just one attack with extra damage to the head. 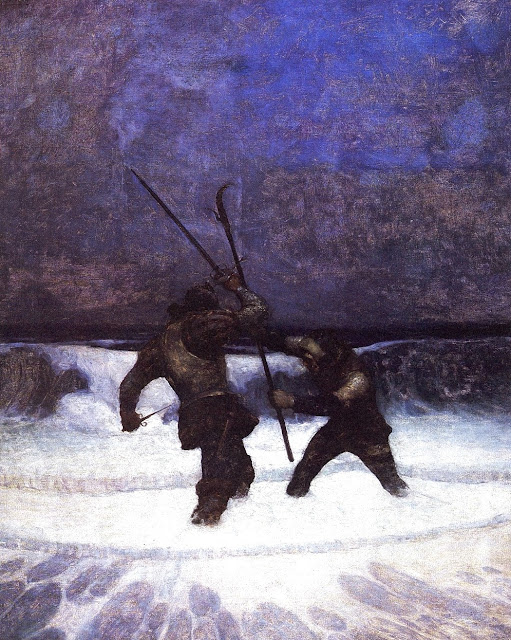 Here are some examples:

Mighty blow: add 1d6 to damage. Add 1d8 if using a two-handed or heavy weapon. This makes more sense if you're using some kind of cleave rules or DR.

Parry: add 1d6 to AC against one attack. If using a shield or weapon, you may choose to add 1d8 but it might break. Missiles can only be parried by shields, a fireball cannot be parried by a common sword, etc.

Dodge: add 1d6 to AC against one attack. Add 1d8 if unarmored or using light armor.

Toughness. Add 1d6 to a saving throw. Because when you're in combat, you're unstoppable. No saving throw? 1d6 penalty to whoever is attacking you instead. No attack roll? 1d6 less damage then.

Opportunistic strike. Use your extra attack at any moment. You can interrupt another character if she is using a spell or slower weapon (maybe compare DEX or make a saving throw to see who stops who). Yes, if your initiative system doesn't allow for wizards to be stopped when casting a spell, now the fighter can stop them all the same. Now you have your own "opportunity attacks" as well.

Disarm, trip, ensnare, etc. Just make an attack roll, no penalty, and produce the desired effect, within reason. Having adequate equipment is a plus. Your opponent might get a saving throw.

Hit location: choose which body part you want to hit. Effects are up to the GM, who will take the amount of damage you dealt in consideration. Knocking a dragon out because you dealt 2 points of damage to his head? Not likely. Cutting a Minotaur's horn? Sounds like a good idea. Not wearing a helmet? That's just dumb...

And so on, ad infinitum. Add options to taste.

Do you miss the warlord? Make a fighter that can rally the troops and grant bonuses to allies. Want a paladin? Your character can use his attack to turn undead or lay on hands, and adds a d10 instead of a d6 to damage when smiting evil. Ranger? Use one of your attacks to command your pet, or something. Defender? Take a hit for an ally. Assassin? Extra attacks when backstabbing (stab! stab! stab!). Wolverine? Why not? Use an attack to regenerate 1 point of HP, to a maximum of whatever you had when you started the battle or Constitution score plus level, whichever is lower.

Also, you get one extra attack when you're a paladin fighting demons. Or an enraged barbarian. Or a knight fighting for you lord, or whatever system you use for this kinds of things.

I would advise against stacking bonuses, but adding different bonuses is ok. Throwing your mace in the wizard's mouth just when he is preparing to cast a fireball? Sounds awesome. Nothing against wizards, really. I kinda like them, in fact.

Of course, you could make a wizard or thief with the same reasoning. Although I do have some other ideas for them, if you're wiling to wait. On the other hand, this system works very well for monsters.

Now you can have a tactical fighter without using penalties for special actions, complicated feats, "encounter" and "daily" actions, and, most important, you can still have your simple Fighter at earlier levels so new players can get the hang of it.

And combat can still be simpler to the players that chose classes with different schitcks, since they have less options to think about.