In 2015, my main campaign was "The Lost Mines of Ravnica". As you might have guessed, it is just Lost Mines of Phandelver (LMoP) in a different setting. It was an awesome campaign, but I wasn't sure that there was much point in writing about it, since everybody knows the adventure already and setting it in Ravnica is no big deal.

But then I read this very interesting article in Dungeon of Signs by Gus L. Contrary to much of popular opinion, that received LMoP quite well, Gus was less than enthused about LMoP (to say the least) and ends the review saying that he might have to "give up this hobby entirely" because of it.

It was curious, because I really liked LMoP but found myself agreeing with most of the review. And that is probably because I changed the setting, and some stuff with it, so I didn't really realize the weakest spots in the adventure.

So I thought I should write about redeeming LMoP.

In fact, Gus himself points the way in the end of his post: "For me however there's no saving this mountain of badly polished tropes and predictable plotting without a complete reskin: including a more sensible faction structure, tearing out the subtle railroads, uprooting the lurking moral judgments and generally running a series of linked locations about a scheming evil adventurer making trouble along the mountainous frontier that had only a vague similarity to Lost Mines of Phandelver." 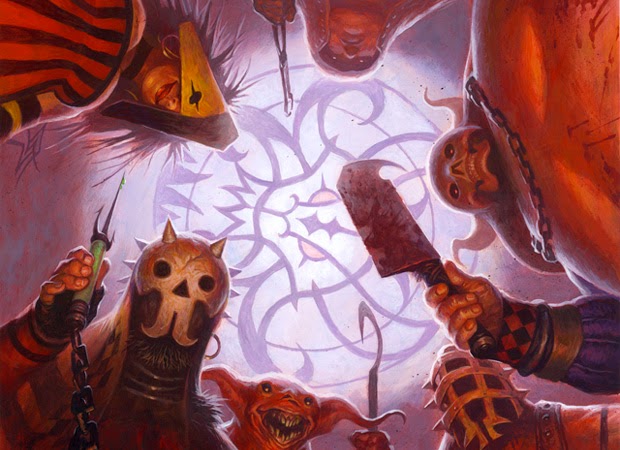 I reckon one good way to salvage LMoP might be getting this well-written critic of it and addressing it point by point; hopefully, we will have the adventure "fixed" in the end of the process.

I know, I know; many people think it doesn't need fixing in the first place. To be honest, neither did I; I just changed the setting because I like Ravnica better. Still it might interest other people with similar ideas. Who knows.

So, I'll add some bits and pieces about how I adapted it to Ravnica; feel free to ask if you need any additional ideas. I might write an article with Ravnica tips only, if you aren't interested in the process of "fixing" LMoP.

I'll break it down in three or four posts to make it more manageable.

By the way, if you don't know Ravnica, here are some sources:

The first problem addressed is the setting - Gus hates the Forgotten Realms because:

It plunders everything cliched and overused from Tolkien but abandons all the strangeness and mythological references. It fills the land with huge civilized bastions of good like Waterdeep and exhaustively defines their systems of governance, but allows these nations to be plagued by trifling enemies like goblin tribes. Forgotten Realms embraces a pedantic faux-medievalism, but then uses a contemporary positivist understanding to explain magic that allows for cutesy magical technology to gloss over the inconvenient aspects of the pre-modern.  Most offensively, most objectionably, Forgotten Realms is a dense, full world, so steeped in cliched lore and laid out so extensively in dull gazetteers that there is no room for a GM's creativity without excising some of the setting's existing lore and map.
[...]
I start with my objections to Forgotten Realms, because I think they are the root of the module's considerable problems.

I have to agree with most of his points, even though I'm not an expert on the Realms, having playing little to no campaigns in it (I'm more of a Dark Sun guy myself). But it shouldn't be hard to just replace the setting with something else.

First of all, it has all the elements that make a good setting in my opinion - lots of shades of grey, a social order that is strong but flexible, no "hard" metaplot, multiple important factions, shifting allegiances, etc.


Ravnica has lots of stuff that attract me personally: a setting reminiscent of Planescape, "non-generic" fantasy (it has no orcs or dwarves, little to no wilderness - it is one single gigantic city, crazy steampunk engines AND crazy geneticists, one single dragon who happens to rule one of the main guilds, etc), Lovecraft-esque deities, and amazing art that inspires me.

In a lot of ways, Ravnica is the opposite of what Gus describes - it embraces the strangeness, government is very messy, enemies are dangerous (Elder Gods, remember?), no faux-medievalism, etc.

The factions are the main point of the setting: the plane is ruled by nine (ten?) guilds with conflicting interests, with no clear "good" guys. The police guild is somewhat reckless, violent and authoritarian (you already know which guild the PCs belonged to, right?); the lawmakers are rigid and quite alien; the church guild is corrupt (but they might save you if you need a lawyer); the nature guild is made mostly of brainwashed pacifists; and even the subterranean hedonist demon guild is necessary to bring riches to the surface. The factions need each other. Without the swampy zombie elves, there is not enough food; without the crazy engineers, there is no infrastructure. Without the guild pact, there is only war. At the same time, there is the large population of poor, guildless people who are stating to think the whole system is meant to keep them down and that the ancient gods weren't so bad after all...

But one of the most important point of Ravnica is... there is no map.

No gazetteer. No useless minutiae. In fact, quite the opposite - it has lots of SPACE, because it is made for nothing but inspiration for art and game mechanics. Which is why it might be better than any RPG setting to just re-skin something else.

There is no risk of ruining the metaplot, because the metaplot is unimportant when compared with the images and words included in the setting. There are books and story lines, yes, but these aren't the main point of the setting.

Coincidentally, Ravnica also has some stuff that make it a very good fit for LMoP: goblins (more on that later), underground tunnels (and a megadungeon), hidden conspiracies, and a main villain who is basically "The Black Spider". On the other hand, the "no wilderness" thing makes it hard to use with LMoP.

There are some easy ways to get around that, but this post is already quite long as it is. See  you next time!