In BX/RC D&D, a thief gets a +4 bonus and double damage when attacking a victim that is unaware. This is called "backstabbing" in the RC.

This classic rule has several problems.

First, it doesn't scale with level. Easy to house rule, but then you'd probably need a table, and I don't like tables. AD&D progression follows a simple formula, but I think mine is easier, although the results are similar.

Second is, well, it actually gets worse with levels, since the thief's attack progression is likely to fall behind the monsters the party will have to fight (although AC changes slower than BAB, usually). The thief will often lose his opportunity, which might be frustrating.

Third, it begs an additional rule for other characters that might want to backstab. Or will it be forbidden to other classes? This goes against my philosophy that "you can do anything" while playing D&D.

Fourth, it makes swords the best weapons to backstab with. Since damage is multiplied, soon the knife becomes a useless weapon for the purpose of assassination.

Each of this problems has a few simple solutions. What I want is to find ONE solution that solves all of them.

Fortunately, it is an easy one (and surely mentioned by other people before me): anyone can backstab an unsuspecting victim - this grants advantage (as in 5e) and double damage - but the thief adds his level to damage AND attacks like a fighter of similar level while doing so.

So, if you use Fighter level as his attack bonus, as I do, a 5th level thief would get a +5 bonus to his attack and +5 to damage, after double damage (2d4+5 when attacking with a knife, for example, or 2d6+5 with a short sword, etc). 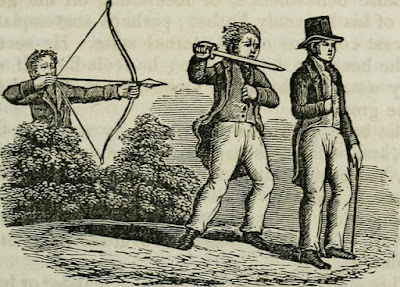 Of course, in order to backstab, one has to get an unsuspecting victim. This is far easier when hiding in the shadows or moving silently. So, even at first level, the thief is way better at it. On the other hand, the unsuspecting victim may be sleeping or involved a friendly chat with you, so anyone can attempt it.

By the way, in my games people can backstab with missile weapons... but I would give no additional damage bonus for that unless they get close enough (i.ei, hide in shadows etc).

And, to be honest, I enjoy the 5e thief backstabbing people in the middle of combat. I bet allowing them to hide during battle (maybe using up an action to do so) wouldn't break old school D&D either.

This will work well for any version of old school D&D. It fits some of my other house rules perfectly - single digit weapons might mean a knife is actually better than a sword for the job sometimes.

Mathematically, the damage is bonus is quite close to AD&D anyway; +1 per level instead of +1d6 every four levels.

The attack bonus makes thieves a bit more powerful than the norm, but I reckon they can use the boost anyway.
Postado por Eric Diaz às 8:25 PM