Dark Souls Weapons in D&D 5e (and some random thoughts)

Dark Souls has some amazing, flavorful weapons, but it is hard to choose the right one, since it depends so much of your "build".

D&D 5e is way simpler in that aspect: if you're a halfling, you wouldn't want to use heavy weapons in most circumstances, which is pretty intuitive. Of course, 5e is far from balanced: for example, there is no reason to use a trident over a spear, RAW. Unless you find a magic trident, of course.

Dark Souls also has one interesting aspect that is lacking in D&D: although some weapons are better for high Strength characters while other favor high Dexterity characters, there is little reason to have both high Strength AND high Dexterity... Which makes little sense in the real world, as most martial arts obviously use both. Not that Dark Souls is particularly "realistic" in that regard, mind you.

Another cool thing that 5e is missing is scaling weapons. Sure, they aren't as necessary as in 4e, but it can be fun to see a PC carry a sword for several levels and discover new aspects from time to time. On the other hand, merely going from +2 to +3 is a bit bland and feels a bit unearned.

Combine these two problems creates an interesting solution: weapons that scale with abilities. 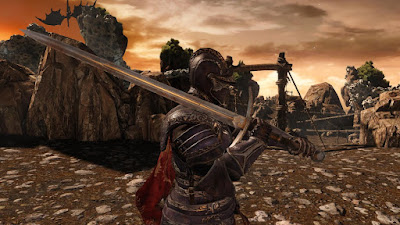 I can see at least a few advantages to such idea:

- Make abilities more useful, less "dump stats".
- As a consequence, it presentes an alternative to feats if you aren't using them (a fighter with GWF gains a significant boost, for example).
- Warriors gain benefits form being both strong AND dexterous, like in real life.
- "Unlocking" new aspects of the weapon is cool and feels earned.
- The PCs gain a deeper bond with weapons that they have for a long time, and feel more special for using them ("most fighters cannot wield the power of the demon-sword"!).
- It also allows PCs to find weapons they cannot wield, giving them a sense of progression when they do.
- It makes spellcasters using weapons a bit more viable in some cases (sorceres and warlocks come to mind).
- You can use interesting "combos", boosting one ability with potions or spells to make better use of your weapons.
- You can use it to create some types of weapons 5e is missing (the main gauche, oversized weapons, the str-based longbow, the finesse great-sword or spear, etc.). Although this is probably left to a different post...

Let us try some examples.

BTW, most of these weapons should be at least very rare and require attunement. 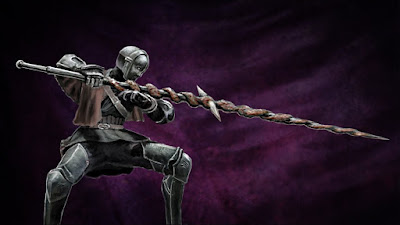 This spear has the finesse trait. If both your Strength and your Dexterity are 13 or greater, you gain a +1 bonus to attack and damage rolls made with this magic weapon. The bonus is raised to +2 of both are 15 or greater, and +3 if both are 17 or greater. Whenever you slay a creature with this weapon, you gain temporary hit points equal to the damage you dealt to it.

Notes: if you think the requirements are too high, try some variant such as the sum of Strength and Dexterity, or the sum of one of those ability scores with the modifier of the second ability. In fact, I'm somewhat tempted to remake the whole combat system based on this idea. 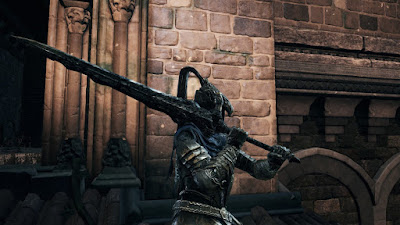 This massive greatsword weights 18 pounds and requires Strength 15 to use effectively. It's base damage is 2d8. You gain a +1 bonus to attack and damage rolls made with this magic weapon. This bonus is raised to +2 if your your Strength is 17 or greater, and +3 if  are 19 or greater.

When you hit a demon with this weapon, it takes an additional 1d6 damage of the weapon’s type. This additional damage is 2d6 if your your Strength is 17 or greater, and 3d6 if  are 19 or greater.

Notes: "double dipping" on Strength might look overpowered, but remember, this is a magic weapon, and if you're enforcing encumbrance it has at least one balancing factor. Besides, huge weapons are cool. 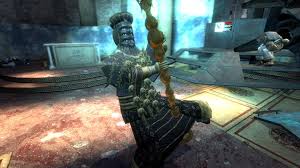 This trident has the finesse trait. While attuned, you can use your Intelligence ability instead of Strength for the attack and damage rolls of melee attacks using that weapon, and the weapon's damage die becomes a d8 (d10 if used with two hands). You gain a +1 bonus to attack and damage rolls made with this magic weapon if your Dexterity is 13 or greater.

Notes: yeah, it's basically Shillelagh with a twist. For the Dark Souls fans: yes, I would DEFINITELY add a "little dance" special power to boost your allies. 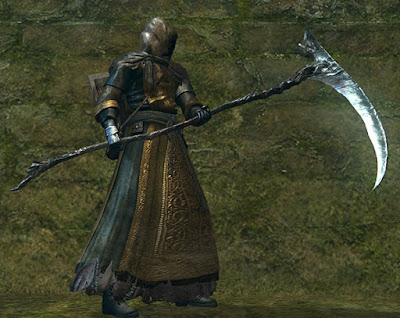 Okay, now let us see one example I got from Braggadouchio, on Reddit  (source):

You gain a +2 bonus to attack and damage rolls

made with this magic weapon. In addition, while you
are attuned to this weapon, when you hit a target, you

can force the target to make a Constitution saving
throw equal to 8 + your Proficiency bonus + your
Charisma modifier. On a failed save, the target's
maximum hit points are reduced by the amount of
damage you dealt with your attack.
Once you use this feature 3 times, you cannot use it

again until you finish a short or long rest.

Notes: I'm not the author, follow the link above for more cool stuff. One interesting aspect here is that you can use you Charisma not to attack or damage, but to make the saving throws harder. Anyone can use this, but a Charisma character does it better.

Other ideas and variations:

In  Dark Souls, you can use special materials and monster parts to upgrade your weapons. It is a good alternative to weapons that scale with level.

Dexterity, Constitution and Wisdom have enough uses already; you don't need too many weapons that scale with them.

Magic weapons can give you proficiency even if you're not proficient, provided you have "Intelligence 15", for example. It's cool to have a wizard that can use no swords other than his special sword.

It might be a good idea to add a new weapon trait such as "Secondary ability: Intelligence", meaning you could add half your Intelligence to damage. Probably too fiddly...

Dark Souls weapons may break or lose some power if you use them for too long; breakage in D&D might make things too fiddly, but some "short rest" or "long rest" powers might do the trick.

Encumbrance is an important aspect of Dark Souls; huge, heavy weapons would be a cool addition to D&D, SPECIALLY if you give a little boost to unencumbered characters. SAy, +1 AC if you're carrying less than half your encumbrance.

"Dark Souls style" weapons can add some variety and complexity to your D&D games. This stuff is really easy to do; you can just pick the weapons you like in some Dark Souls wiki and adapt it to D&D.

UPDATE: I released a book (5e Manual of Arms: Weapons) that deals with similar issues. See below!


Thank you all for your audience and support!