Look at this guy.

As we've mentioned before, not a great build in 5e. If you're using a bow, you must have high Dex, but if you using heavy (or even medium, to some extent) armor (and a longsword or something similar) you should have high Str - which makes your Dex less useful. There is little reason to have both Str and Dex for most characters. Unlike real life.

But the "Strong Archer" archetype is pretty cool, and I'm playing 5e. So, I want this to be a good character - think of something like old school D&D, when fighters could be amazing archers, as their fighter level was much more important than their Dex.

Fortunately, 3e has a decent solution for Str fighters:

Now, I'm not saying composite longbows work like that in real life. As far as I can tell, EVERY bow should be made with the wielder's Strength in mind, and EVERY bowman should get some benefit from Strength. But hey, it sounds believable enough, and we can use it to make good strength archers in 5e:


I say Strength instead of Dexterity to avoid make it an uber-powerful weapon. The fact that you still use Dexterity to attack allows Dexterity fighters to keep an edge in ranged combat. An you can even have a composite shortbow!

Crossbows? Exactly the same deal. Everyone can shoot a heavy crossbow, but if you're too weak you cannot draw it easily.

"Composite crossbow" sounds less familiar to me. I'm not an expert, TBH. But you can apply the same reasoning.

There is also a"compound crossbow" that sounds modern but interesting. Look at that (from Wikipedia):

(Compound bow): before the invention of compound bows, composite bows were described as "compound".[2] This usage is now outdated.

(Crossbow): A compound crossbow is a modern crossbow and is similar to a compound bow. The limbs are usually much stiffer than those of a recurve crossbow. This limb stiffness makes the compound bow more energy efficient than other bows, but the limbs are too stiff to be drawn comfortably with a string attached directly to them. The compound bow has the string attached to the pulleys, one or both of which has one or more cables attached to the opposite limb. When the string is drawn back, the string causes the pulleys to turn. This causes the pulleys to pull the cables, which in turn causes the limbs to bend and thus store energy. Other types of compound bows use either (one or both) cam shaped or eccentrically mounted pulleys in order to provide a "let off", such that the archer is not holding against the maximum draw weight of the bow while trying to aim. But, in a crossbow, the string is held back mechanically, so there is no advantage in providing a let off. Therefore, compound crossbows generally only use pulleys that are both round and concentrically mounted, in order to capture the maximum available energy from the relatively short draw length.

Not exactly what we're looking for... but I think the name is good enough.

Now, look at THIS guy from Dark Souls: 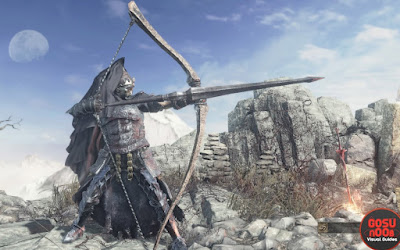 It looks a bit ridiculous... but also a bit awesome IMO. Shooting LANCES with your bow? Huge "dragonslayer" weapons?

Yeah, sounds good to me.

So this becomes an ideal Barbarian weapon. It requires BOTH Str and Dex, and does AMAZING criticals!

Huge crossbows! Something you might see Bard (from the Hobbit) or Bronn (from TV's GoT) using against dragons. 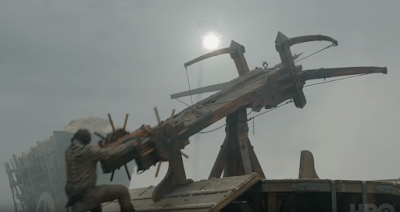 These are siege weapons, not something you can carry on your shoulder. The DMG mentions the Ballista, that requires three actions to attack and causes 3d10 damage (which is not that great; I would probably upgrade all siege weapons from the DMG if they were to be used against a single target, but maybe they are harder to hit...).

Use a Str check to load it, and Dex to hit it with, get rid of the "aiming" action... and you have a very cool weapon for the PCs to use, maybe even working together with a single purpose.

Since ballistae must be mounted on a castle or carriage, the PCs are unlikely to abuse it... but it makes for a great, epic moment when they manage to hit something with it!

As for the strong archers, we've given them enough toys for today.
Postado por Eric Diaz às 6:26 PM