Tracking hit points for 12 different orcs at the same time - especially if you're not using miniatures.

"Warrior" classes have few ways of fighting mobs. Maybe this isn't such a big problem for everybody... but I don't like thinking of a 10th-level barbarian or fighter being taken down by a dozen orcs. How many did Boromir kill? I didn't run the numbers, so maybe I'm wrong about the odds here. Let me know. Anyway...

When you are fighting against a group of minions, all damage is dealt to the group, indistinctively.

There is one single number you track: excess damage. 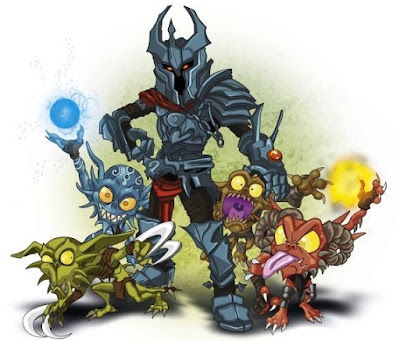 For example, each orc has 15 HP. If you deal 10 damage to an orc and an ally deals 7 damage to another orc, one orc is killed, and there are 2 points of excess damage. (This doesn't necessarily mean the second orc is dead - it means some orc, for some reason, dropped out of the fight).

If you cast Burning Hands and deal 8 points of damage to four different orcs, total damage dealt is 32 HP. Which means you killed to orcs and caused 2 points of excess damage.

But if you like the idea of losing some of the excess damage, you can set the threshold a bit higher - maybe 20 HP or even more.

To avoid absurdity, you can limit this options to melee (within melee reach) and AoE spells that affect all targets, or nearby targets. Ranged weapons are very good as they are, anyway. But then again you might just allow crazy results - imagine a thrown spear that pins two goblins at once! It all depends on the tone you're going for.

Have I seen this before?

Probably. 13th Age has something similar, and even the DMG has a "cleaving" variant that says "When a melee attack reduces an undamaged creature to 0 hit points, any excess damage from that attack might carry over to another creature nearby."

But notice that this isn't exactly the same - this doesn't require you if you wound two creatures with burning hands, for example, you can kill one and leave other barely hurt instead.

Also, I remember discussing this idea in forums and I'm sure someone else must have had similar thoughts.