(For an idea by Eric Nieudan)

Moon-headed giants were once satellites to a forgotten planet that orbited the Black Sun. For the first time in a millions of years, they aligned enough to anti-eclipse the Black Sun for a couple of seconds, and give a small respite to the miserable creatures that inhabited the planet.

The evil star cursed the five moons to live as deformed giants in a far away planet, never to return to the dark skies they used to call home.

Now banned from their original system, these lunatic giants are plagued by bouts of depression, alternated with maniac phases. They often try to conquer or build empty castles so they can rule over nothingness as if it where the dark skies they lived in the past.

They display a keen interest on silver, rare minerals and inanimate matter from outside their current planet, and wield +1 meteoric weapons of their own making. They hate the bright sun almost as much as they hate the Black one and prefer to dwell in the dark, sometimes venturing out during the night.

Fairly intelligent but unstable and mostly disinterested in human affairs, they can be reasoned or bargained with until they get bored or angry - although each Moon-headed Giant (Blood Moon, Gold Moon, Broken Moon, Bad Moon and Cold Moon) has its own distinct personality, not always compatible with the others. 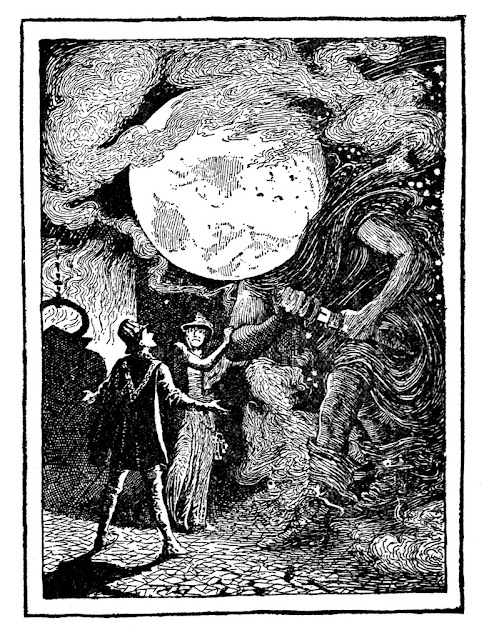