As I've mentioned a few times before, OSR has different definitions for many people. You won't find any of them in this post: just a small anecdote from this week's game, that I've shared over G+. It may be relevant to the old school versus new school... but then again, it's just one session.

I was starting a new campaign and had to choose between 5e and Dark Fantasy Basic (DFB), my BX clone.

I had one new player in my group, to whom I had never GMed to, and everybody was more familiar with "official" D&D. Another player wanted to make a gnoll PC, which unfortunately isn't a thing that exists in DFB (yet). So I thought 5e would be a better fit for everybody.

We spent most of the session choosing features and spells for the new characters (the warlock was a hassle). Having options is nice, but going though a dozen classes and more than a dozen races (had Volo's on the table... sigh) didn't improve the enjoyment of the game.

Luckily we rolled stats randomly (with 5e quick characters) skipped feats, flaws, etc. In the end, we manage to play a bit less than two hours (we had four to begin with). 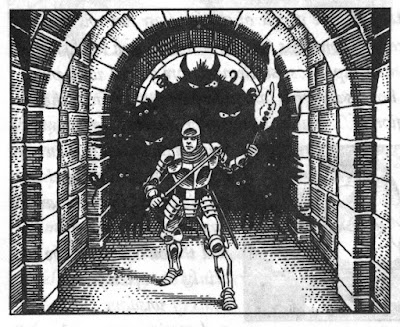 During the game, I went full "YES, you can" and "NO,  we don't need to check the rules" on the players.

Player: Which weapons can my warlock use?
GM: You have 10 Dex and 10 Str... Just pick any weapon you want.

Player: Can my 1st level spell identify if this plant is poisonous?"
GM: I don't remember... but you're a druid spending a spell slot, of course it can.

Player: Can my barbarian pick the snake-demon and thrown it across the room in one turn? How does grappling work in 5e again?
GM: Just make an athletics check and we'll see.

I do not pull punches against the PCs when running adventures, but it seems I cannot be bothered to check the books during play anymore, and I err on the side of "of course you can". Like I've said in the latest post, the NPCs play by the same rules (or lack of thereof)!

I also (half-jokingly) went through the whole "the dice do nothing" exchange during the game:

Player: Can I roll Arcana?
GM: Sure.
Player: 17.
GM: Good for you. Now, describe what you're trying to do instead.

BTW, the fact that the character was a gnoll didn't come up even once in the session. Nor did any of the other races (aasimar and tiefling... yeah). Except for the goliath, who had disadvantage fighting witg a greataxe in a narrow corridor... which was fun, but I'm pretty sure is not in the actual rules of the game.

In short, WotC D&D has many different options, but that doesn't necessarily means more enjoyment - even though I REALLY LIKE having options.

And RAW has almost no place at my table nowadays. Which is fine.

It was an awesome session nonetheless, once we started playing. Didn't finish the module (Frozen in Time, for DCC) but seemed like a good adventure (although it requires PCs to be a bit foolhardy at times).

In the end, I had something very positive to say about 5e: I ignored spells, some combat rules, and weapon proficiencies while running a DCC adventure for 5e with no previous adaptation... and it went very smoothly. After we started playing the game, everyone had a blast.

In conclusion, 5e might be a bit fiddly for my tastes, but it is a solid game and works well under this kind of OSR pressure!
Postado por Eric Diaz às 5:41 PM