The day the characters killed a baby

I'm currently playing Curse of Strahd. It certainly has its dark moments. However, the most appalling thing that happened in one of my games was in a different campaign. I was always a bit hesitant to tell this story here but... here it goes.

What was it? Well, you've seen the title of this post.

Anyway, during the height of the "Game of Thrones" TV show popularity, I did the whole "Shadows of Westeros" campaign.

The PCs were big players in the seven realms, a few years after Robert Baratheon took the throne (i.e., a decade before the begging of the books/show). The fought in Pike, went to tourneys, met the laughing lion, etc. It was fun!

One of the PCs had his whole family slain by a scheming bannerman (allegedly, for supporting the Targaryens against Bob Baratheon). In the end, they stormed his castle and managed to kill him. But they forgot to ask if he had a wife before storming the castle. Oh well, they finished the job.

Then they heard a baby cry.

The campaign ended immediately after that, in the same, session. Maybe it was partly because I couldn't stomach what the PCs did, they became villains IMO, but also the PCs got sentenced, killed, or sent to the wall (which was EXACTLY the plan of the their "ally", who encouraged then to attack the scheming bannerman by surprise). The whole "season" was ending anyway.

I didn't condemn the players, though; it was probably my own fault for trying to give the game that GoT vibe.

And, well, these things happen in Westeros; even ordinary peasants commit atrocities as you can see in Martin's latest book. But is not a type of campaign I enjoy. 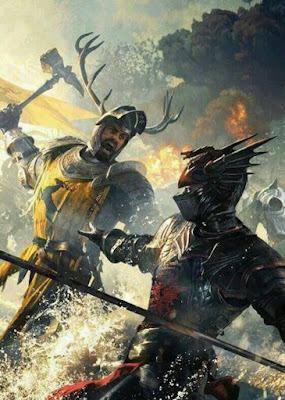 Somebody asked a question about GoT campaigns on reddit, and I told this story. This was the most popular reply:

I have to admit, it made me laugh.

Moral of the story: The PCs will often surprise you... and you won't necessarily like it! ;)
Postado por Eric Diaz às 6:51 PM