Here is part V. That was the theory.
Here is what I'm doing in practice.
I am NOT using 5e rules exactly as written... but I am convinced you COULD use these rules and keep 90% of 5e. At least until level 5... see below.
In short, the idea is this: you only roll ONE d20 PER ROUND. Everyone rolls at the same time, saying what they plan to do.
The result will tell you:
- Initiative.
- Attack roll.
- Damage.
- Saving throws.
- "Luck".
This is really simple but I'll explain some details. 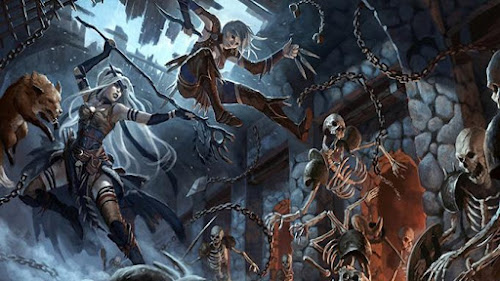 Let's use a fighter as our example. She has a +4 Strength bonus. She rolls 12 on the d20.
Her initiative is 16. Forget adding Dex to initiative, it is unnecessary and not necessarily realistic.
Her attack roll is 16. That works as expected.
Her damage is a fixed number (say, 10). 5e D&D already suggests this when dealing with monsters. In our example, let's say her weapon deal 6 points of damage, plus 4 from Strength. a natural 20 would cause 20 damage instead.
Her saving throw is 12+ability score. Saving throws work as intended in 5e.
(Alternatively, you don't roll for saving throws anymore. Instead, saving throw is a number like AC; 10+stat+proficiency. Since the attacker is always rolling a d20, this also works).
Her "luck" seems decent (12). Here is one cool thing I improvised hen trying this system for the first time. I had a few goblins archers shooting at the PCs. Rolled all at once. One of them hits... but who was hit? The PC who rolled the lowest number on the d20. Of course, you're free to ignore this part.
And that's basically all of it.
Combat example:
Fighter, wizard and rogue are fighting three orcs.
Everyone attacks - except the wizard, who cast fireball, hitting all three orcs. The wizard rolls 12 (+4 from Int, 16 total), the fighter 17 (21 total). The rogue (trying to "sneak attack") rolls a natural 1 (obviously a miss). The orcs roll 14 (17), 3 (6), and 5 (8).
First, fighter hits an orc. Unless he has chosen an specific orc, just chose the one with the lowest roll. The orc is injured.
Then, one orc (17) sees the rogue trying to sneak around and hits him (since he has the lowest roll; however, circumstances might dictate otherwise, if only the fighter is in the front line, for example).
Wizard casts fireball; two orcs failed the save (since they rolled lower than the wizard). One dies (he was injured). The other is engulfed in flames and misses the attack. (Let's just assume for the sake of argument that the fireball didn't hit the wizard's allies in the first turn).
End of turn.
Problems?
Since most of the system is unchanged, there are few problems to be found. The MAIN problem is advantage and disadvantage, but I'm inclined to apply it as written. Attacking underwater? Seems obvious that the disadvantage should apply BOTH to initiative and the attack roll. Etc.
A bigger problem happens if you have multiple attacks. But I'm okay with having separate attacks. Fighter attacks, then goblin attacks, then fighter attacks again and again, etc.
There are other problems, surely... but I've found nothing insurmountable so far.
Other consequences
Combat is faster and more random. A bit more exciting, maybe a bit less tactical. I like it so far. Need to test it further.
What's next?
The play-test of this "minimalist D&D" is going very well. I'll probably make the whole system public very soon, I just have to adjust a few things.
I will post a bit more about Strahd soon, too; sorry for the delay.
Postado por Eric Diaz às 2:33 PM