Welcome to the Negaworld - A review of Black Sun Deathcrawl

You are the cursed - remnants of life in a universe of decay.
Cannibalistic parasites, you suck a meager existence from the corpse of a long-dead reality.
Once you had nations, races, goals.
Now you are one, united at last in the unending struggle for survival in a reality that abhors you.
Once you had love and happiness and light
Now there is only the crawl
- Black Sun Deathcrawl

Black Sun Deathcrawl is a setting for DCC RPG, written by James MacGeorge. You can get it here. It is also probably the most bleak, depressing, and desperate setting ever written in the OSR, maybe for RPGs in general. 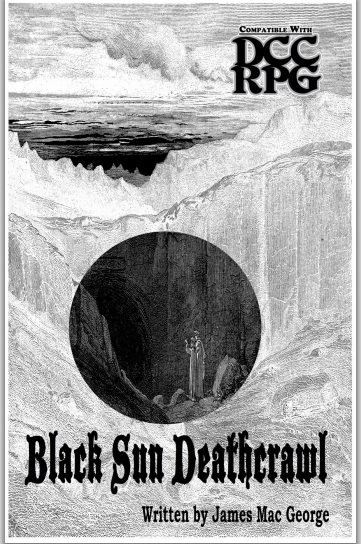 In BSD, you play The Cursed - the last survivors of a dying (dead?) world. The Black Sun ascended and basically killed everything. The only (temporary) respite can be found by digging deep into the ground, but the unholy light of this sun will creep in there too after a while, along with the unrelenting monsters. As The Cursed dig, they unknowingly weaken the structure of the planet. bringing the end closer.

There is no hope, no purpose, no end game. The only way out for the characters is losing all hope and committing suicide - even death is temporary and only makes you worse.

There is no dark humor to soften the blow, too. The tone is dead serious. The art (basically Gustave Dore's illustrations for Dante's Inferno) and layout (with big, black letter and ominous sentences) really manage to reinforce the themes.

Although the setting is very reminiscent of Dark Souls in many aspects (the dialogue with the avatar of a dead god could have been pulled from any of the games), while other remind me of The Isle of the Torturers or other somber tales by Clark Ashton Smith, the hopeless tone is more like The Road, by Cormac McCarthy, mentioned in the books appendix, or The Day After, The Dying of the Light, etc.

Amazingly, the author has succeeded in creating an actual short adventure in this bleak setting. It is very railroady, as it should be, because characters have little options in this world. While the characters are digging for their lives, they find an underground dwarven city yet untouched by the Black Sun. The curse follows the characters and [SPOILERS] eventually destroys everything [/SPOILERS].

To be honest, I am not sure I would ever play or run an adventure in such setting with my regular group, but I enjoyed reading it. This is what I would call "RPG poetry" in its finest form. Not something most people would actually use as written, but it might be mined for ideas and certainly makes you stuck to your seat. Or make you reevaluate your life if you're in a somber mood (no, just kidding... but it is quite depressing).

The choice of DCC (or any other "old school" minded game) is perfect for this game. Using some "modern" or custom engine to move "hope tokens", "character arcs" or something similar would detract from the experience and make the point harder to see. Destroying familiar things such as hit points and character classes is way more hurtful. The tweaks to the system - hope instead of luck, the player-vs-player method of hurting other characters to survive, etc - also enhance the experience.

We have seem plenty of cool negadungeons (basically, dungeons with no treasure, experience, or anything positive for the characters) already, most written for Lamentations of the Flame Princess really. BSD is the first Negaworld I have seen in RPGs. It's depressing, it's pointless, it's well-written and it's the most creative thing I have read in RPGs in a while.

In summary: go read it. You will not regret it.

Or maybe you will. But only because it might ruin your mood.
Postado por Eric Diaz às 9:44 AM