Continuing my series on simple fighters and wizards, I will skip clerics and thieves for now and go directly to simple monsters. I'm starting to think my ideal version of D&D would be somewhere between the simplicity of B/X and the (limited) complexity of BECMI, with some stuff from other editions (specially 0E and 5E) thrown in; this posts are made with Moldvay and Mentzer in mind.

One thing I like about modern editions of D&D is that there are often clear instructions for monster creation. I am not saying that they are necessarily good (or bad, or inaccurate, or incredibly complicated), but they can be very helpful. There is no clear guidelines for old school D&D, and even reverse engineering is difficult, since monsters with the same HD can often have completely different ACs, attacks, damage, etc. If anyone has successfully created an exact formula to find out damage and AC from HD, I would be very happy to hear it; my own attempts have been fruitless.

To create monsters in old school D&D, you must either develop an instinct and guess the appropriate stats, or come up with your own guidelines. Here are mine.

The reason I created this is basically to use a different way of running monsters while I'm GMing, which will have to wait for the next post, since it's based on the damage-per-HD idea explained below.

If you want to skip all the explanations, just skip to the table at the end.

The reasoning behind the table is based on three things:

- The D&D design principles or patterns that I outlined here. For example, the fact that HP and BAB increases more dramatically and more often than AC or damage in almost all editions of D&D.

- This quote by Gary Gygax:

I say that as barbarians get d12 for HPs, then clearly extrapolation of the same principle must apply to large and vigorous creatures. This mitigates the potential increase in PC prowess. As a matter of fact, adult critters were assigned 7-12 HPs per HD in my AD&D campaign--have been given the same in what I have designed for the C&C game system. Also, with increase in damage due to Strength, all large and powerful monsters, including ogres and giants, gain a damage bonus equal to their number of HD.

Admittedly, this is not in the UA work, but it logically follows, and would have been included in the revised edition of AD&D that I was planning.

Actually I planned to go through the monsters' roster and re-assign HD types--d4, d6, d8, d10, and d12. While doing that in regards to the HPs of each type, the monsters' chance to hit based on number of HD would not be affected.

- This bit from Jens D.'s blog, based on the Rules Cyclopedia. The guidelines in the RC aren't for monster creation, but for making bigger versions of existing monsters. Still, they are great for starting material. You choose a modifier from -3 (much smaller) to +3 (much larger) and then:

* There should always be a minimum of 1 point per die.

Here is how I would calculate a monster's traits from HD:

- Hit points: 4 per HD. I can say its midway between the LBBs and Basic (after all, I use d6s for damage but multiple attacks for fighters), but to be honest it is just easier to calculate. You can always roll d8s or d6s, of course.

- Attack rolls: traditionally, monsters are even better at fighting than fighters; +1 to attack per HD is simple and powerful enough. I offer some alternatives below.

- Damage: 1d6+HD, a very simple method based on the Gygax quote above. It keeps the traditional pattern of "one attack can be deadly at low levels, not so much at high levels". I figure most people wouldn't appreciate a monster that does "1d6+17 damage", so I used d6s in the table below, since I'm using only d6s for damage.

- Saves: since each edition and retroclone has different saves, you can go with the traditional "saves as a level X fighter", where X is equal to HD.

- AC: here is where I wouldn't use the RC guidelines for bigger monsters, since it would mess with the pattern of "at high levels you hit more often but take more hits to defeat an enemy". Adding half HD as a bonus to AC is good enough that you can have a 19 HD monster and still hit it with your level 19 wizard without using exception-based rules, negative AC, etc. Of course, your huge Red Dragon might need more than 20 HD using this system if you want it to be near immune from normal weapons.

You can keep things such as "extra damage per die" or "extra HP per HD (or just "bigger HD") as special powers. You can use them without changing the amount HD, as RC suggests, and without changing attack bonus, as Gygax suggests. Think about it: big monsters would be tougher and hit harder, but would be no harder to hit nor would they hit more often.

(And if you want rules for breath weapons, multiple attacks, spells, monsters made of iron, and so on, just stay tuned).

You might have noticed that this might make monsters way tougher than adventures of similar level, specially if they have lots of HD. This is intentional (also, quite common in BD&D); a level 20 fighter has an army, and she should use it when fighting a 20 HD dragon. Also, high level adventures have magic weapons, spells, etc; if you're not using those, you might want to limit monster BAB, use the Fighter progression, or use 3/4 instead of the Fighter's 2/3, for example. My example below uses diminishing returns after 20 HD (to be honest, I would go out of my way to use +1 per HD, the fighter's progression, or any simple formula, but then again you don't need a table for that). 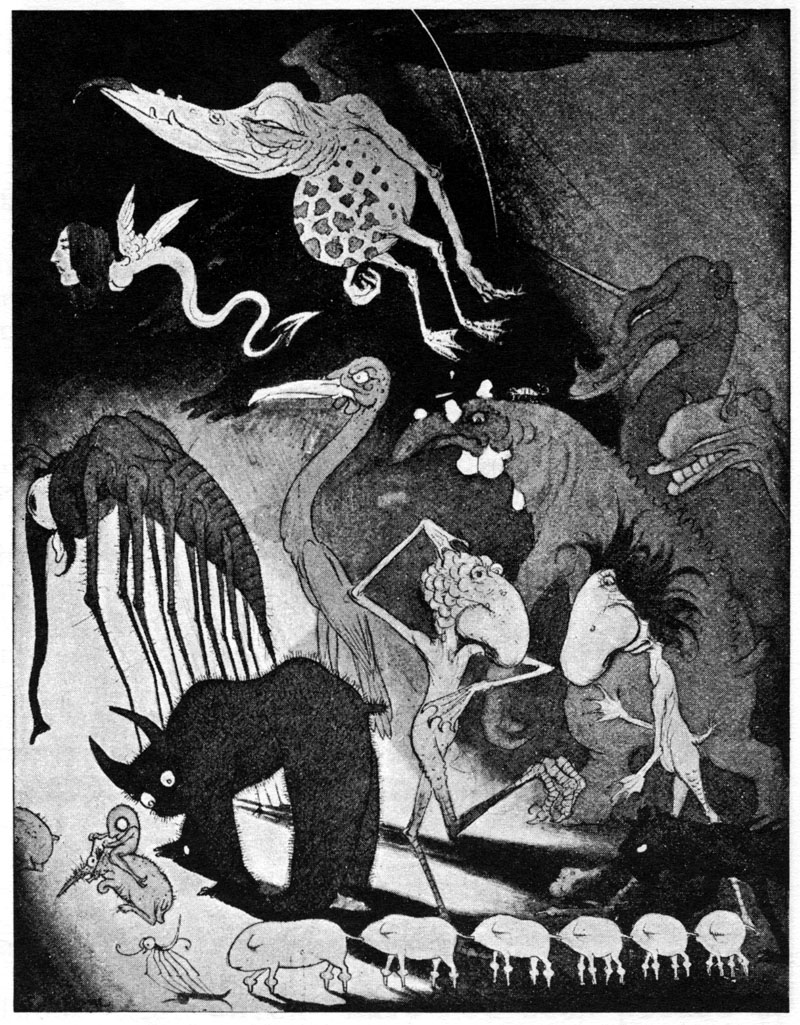 So, without further ado, here is the table. For intermediary values (HD 1+1, for example), use the next line when calculating BAB and damage, but not AC (HD 1+1 has +2 attack bonus and causes 1d+2 damage, for example, but 9 AC and 5 HP), to keep with the idea that this kinds of creatures punch above their weight class.
What's the point? I really like to have simple formulas instead of lists and charts for spells, skills, BAB and saving throws. Same thing with monsters - it is nice to know where to start when you want to create a monster on the fly.
Postado por Eric Diaz às 2:41 PM