In my never-ending search of efficient (or elegant) mechanics for D&D, I keep going back to opposed rolls. Although this mechanic is very common in many RPGs (e.g., 4e D&D, GURPS, Fate, and so on), it often feels a bit underused in my favorite forms of D&D (TSR/OSR and 5e).

In short, opposed rolls means just rolling for both sides and making the best roll the winner. You don't even need to roll for both; you can give a roll of 10 for one side and roll 1d20 for the other, if you're using a d20, for example.

But, basically, any roll in which the possibility of success relies on both your skill/power and your opponents' skill/power can be considered an opposed rolls. Which is very common today, but NOT usually the case with old school D&D. Saving throws, moving silently, hear noise, etc., were often used without any regard for the opposition's capabilities. Traditionally, there is no "contest" between move silently and hear noise, for example; these abilities are "self referential", relying solely on the character attempting them.

There are some opposed rolls in old school D&D, but they are often disguised and made complicated for no apparent reason. For example, giving the thief a 5% penalty to pick pocket for each level of the victim beyond level 5 is identical to just adding +1 per level on a d20 roll after level 5. Turn Undead is also a opposed roll between the cleric's level and the undead's HD.

The lesson here, I think, is that because D&D is a "class & level" game, opposed rolls should always take level into consideration. Used in this way, opposed rolls reinforce the "class and level" aspect of the game in a way that "rolling under ability score" does not.

Anyway, I like the mechanic and I'm using it use it extensively in my rewrite of B/X.

And I'd say that  opposed rolls solve a number of issues.

For example, it makes it easier to steal from low-level chumps, and harder to save against a powerful wizard's spell, and it allows me to play with no "charts" for thieves' skills and Turn Undead.

Of course, the old school method has a few advantages. For example, you can have more dramatic high-level spells that circumvent HP if everyone has a better chance of resisting them despite you level.

Modern D&D uses of opposed rolls often as a default mechanic; but I think 5e could be improved by applying some of these ideas to saving throws.

One of my main gripes with 5e is saving throws.

Unlike all other editions of D&D, it is possible (and likely) that some of the saving throws will not improve at all during a character's career.

A 20th level wizard can easily survive a fall from 100 feet, but he is no better than a first level wizard at dealing with hunger (curiously enough, being proficient in Constitution saves will help you against dehydration, but not starvation).

Which makes absolutely no sense in my humble opinion.

But to save AGAINST a spell cast by a 20th level wizard is going to be considerably harder for a 20th level fighter if she is not proficient in the right saves.

This is the exact opposite of old school D&D, where saves always get better regardless of the level of the attacker. 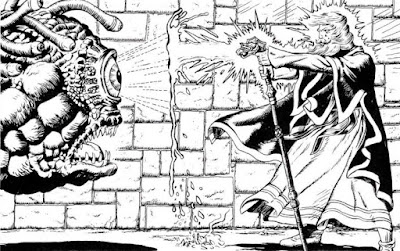 You see, hit points, however you define them, are often used to measure resilience; and, since all high level characters have more HP, they should ALWAYS have better saving throws.

This is probably where 3e wizards went wrong, by the way: saving throws didn't scale fast enough, making hit points a terrible tool for defeating a high level foe. A low level bard has no chance at taking a down a 150 HP Fighter through damage... but a mind-affecting spell will allow the fighter to be easily avoided. The iconic Fireball becomes useless with time.

As you can see, 5e uses a similar method, that is made even worse in some aspects, since some saving throws don't scale at all.

If you like characters to have better saves as they level up, just give everybody proficiency in all saves, and "expertise" (double proficiency) in two saves.

And ditch the whole idea of "save DC = 8 + ability modifier + proficiency bonus". Save DC is like passive perception DC: 10 + ability + bonus... like every other opposed roll.

BTW, I think D&D next started this way, but they changed it for some reason. Well, I'm breaking it again! But if you can see the reasoning behind this, let me know in the comments.

So, in conclusion... I am not sure I have a great conclusion for this one. Opposed rolls are extremely useful, but can also be misused. Character level is the main measure of competency in D&D, so most rolls should take that in consideration - for all parties involved.

In any case, this is what I'm using for my B/X house rules. Spell saving throws? Roll higher than the wizard, and you're saved. Grappling? Just roll attack and see if your foe can roll higher than you. Sneaking around? Roll your stealth against your opponents' perception.

But, in the end, this is a matter of taste and degree; no right or wrong here, choose whatever you find more fun.
UPDATE: A few months after writing this, I published a whole game (Dark Fantasy Basic) using this reasoning. Check it out!
Postado por Eric Diaz às 2:25 PM