Quick Guide to the OSR Extravaganza

DTRPG is holding an "OSR sale" with three different - and very interesting - bundles.

Here are a few quick notes about them.

First, it bears mentioning that if you ALREADY have some of the books in the sale, you get a discount for those, which is very cool. So "I got that already" is a not a good reason to pass on those; on the contrary.

Second, it seems that now old School D&D is officially part of the OSR... Funny, right? It is like classical Greek originals became a part of the Italian renaissance. Or, as James Raggi said on G+, it means "we won". Well, with all these books easily available I guess we did win... something. But let us talk about the sale.

Anyway, if you know this stuff already, you probably don't need my humble opinion. But if you want to buy something and you don't know what, this is what I think (BTW, I had to look some of it up; DTRPG has plenty of detailed information on each title, courtesy of Shannon Appelcline). 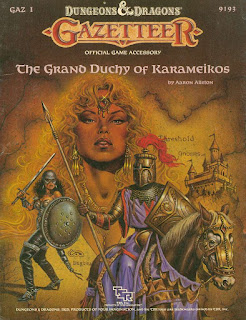 I like the RC over AD&D, so this is the best system in the bundle IMO. Although each gazetteer adds more rules (some are repeated in the RC), I find the core book to be a well-polished version of D&D, balancing detail and ease of use. B/X is still my favorite, but the RC adds plenty of useful detail and has an implicit 2d6 GM mechanic that inspired me to write some posts in this blog.

The Gazetteers are hit-and-miss, AFAIK; I don't know most of them, but most seem reminiscent of a "faux medieval" feel, although there is plenty of "weird" mixed in. If you want stuff to drop on your standard D&D campaign (assuming you're using weird medieval settings such as Forgotten Realms, Dragonlance, Greyhawk, etc.), it might be very useful. 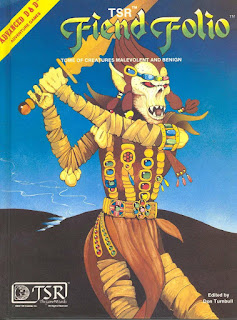 I'm definitely not the greatest fan of the AD&D's PHB. Feels overly complicated when compared to my favorite version (B/X) and there are plenty of things that made no sense to me (such as the way the bard class works). The Survival Guides also seem too complicated for my tastes (one or two pages are often enough for me).

But I DO like reading many parts of the DMG. More books should teach GMs how bell curves work! And this bundle includes the original Monster Manuals, including the Fiend Folio (1e). I am a fan of Russ Nicholson's art (among other greats), and the monsters (create by Ian Livingstone and Charles Stross, among many others) include many classics such as the hook horror, the shadow demon and the death knight - and the weird/"planar" githzerai, githyanki and slaad, that went on to become quite important in Planescape. 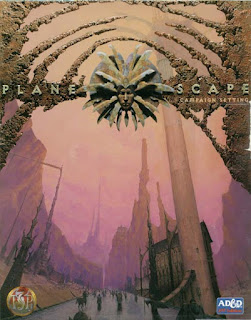 Planescape Megabundle (2e) - The plain, the planar, and more monsters

2e (the system) is very different from Planescape (the setting).

2e seems to lack an unique, distinctive mark; it is an update AD&D and not necessarily better, although it does include some aspects that I like (such as better organization and its own skill system, unlike the 1e PHB; also, I DO think THAC0 is basically a good idea). The removal of assassins, demons and devils to make D&D more family-friendly after the satanic panic didn't help much.

Planescape, on the other hand, is very idiosyncratic. It has an unique flavor of cosmic high fantasy with many fans but little use in "standard" D&D campaigns. Also, it has a particular jargon (it often uses "in universe" slang) that can be aggravating at times. Tony DiTerlizzi's art is amazing, of course, but Planescape's visual identity bores me sometimes.

Now, if you like plane-hopping high fantasy - and I do - Planescape has innumerable cool factions, characters and ideas that you can use with settings such as Ravnica or, maybe, Ptolus.

And I MUST mention the Monstrous Manual, my favorite monster book. It might be nostalgia, it might be the size (384 pages according to DTRPG), or probably the colorful illustrations (DiTerlizzi has some awesome ones here too). It strikes a great balance between stat-blocks and interesting information (although the stats do include plenty of useless stuff).

Other stuff on sale

Plenty of good stuff 15% off too. Might was well take the chance if there is something in particular you've thinking of buying. The Bat in the Attic sale seems like a good deal too.

In conclusion... what should you buy?

To be honest, I'll probably buy the three bundles. There is too much good stuff to pass. But if I had to choose, I'd take Know World, then Planescape, then AD&D, in that order.
Postado por Eric Diaz às 5:31 PM