"Double Weapons" - weapons made for attacking with both ends - are quite rare in real life (except for the quarterstaff, and a few Chinese weapons), and unseen in actual armies, as far as I know. They might be better for dueling than war, but I am not sure such a weapon (with the exception of the quarterstaff) can really be effective.

Of course, you can always punch with a sword's pommel or guard, or add a spear head to the other end of a pole weapon, but I'm talking about weapons that are SWUNG to attack with both ends. Something like this: 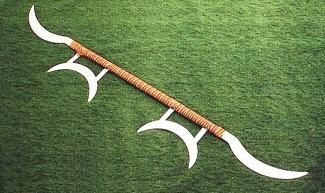 While a bit strange, double weapons are not uncommon in fiction. They are usually associated with characters that are both agile and strong. When I wrote my old Adryon setting, I gave the weapon picture above as a cultural weapon to the Bashti, my cat-people.

In D&D, 3rd edition had a whole class of double weapons. Here is how they work (from the SRD):

It is not impossible to use the 3.5e rules in 5e almost as written. Just apply 5e's two-weapon fighting limitations to double weapons. You can attack with one end with a bonus action but you don’t add your ability modifier to the damage of the bonus action unless you have the fighting style that says you can.

Damage should be limited to 1d6/1d6 unless you can dual-wield weapons that aren't light (with the Dual Wielder feat, for example) - then you can get a heavier weapon that deals 1d8/1d8 damage, which is basically the same as wielding two rapiers.

Even better, you can keep the quarterstaff damage as written and give 1d4 damage to the other end so that characters with multiple attacks get a boost.

This is how a "double" weapon properties would look like in 5e:

Double. When you take the Attack action and attack with a double weapon that you’re holding in both hands, you can use a bonus action to attack with the other end of the weapon, causing 1d4 damage. You don’t add your ability modifier to the damage of the bonus attack, unless that modifier is negative.

If used this way, double weapons seem a bit better than TWF - mostly because of how they interact with things such as multiple attacks, magic item attunement, object interaction, spells such as Magic Weapon and Shillelagh, etc. - but they cannot be thrown or used with finesse, which balances things a bit. 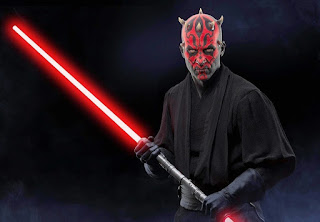 Double Weapon Master
You have mastered techniques that allow you to fight effectivly with both ends of a single weapon. You can treat the quarterstaff as a double weapon. In addition, while wielding a double weapon with both hands, you gain the following benefits:


As you can see, the second bullet point is from my last post on two-weapon fighting.

The feat still looks underwhelming when compared to Polearm Master (one of the best feats in the PHB, IMO), but might be used with the exotic double weapons, in addition to the increased accuracy and AC. It is better than PAM to deal damage consistently on your turn, but worse when trying to "control the battlefield" against incoming enemies.