Each edition of D&D has its own rules for generating abilities - from the original 3d6 in order to the 10 different methods contained in AD&D 2e + Skills and powers.

I have my own: the yin-yang method.

5e D&D has two basic methods of generating abilities (source - the text is modified from the PHB but the results are the same):

Standard: Roll 4d6, discard the lowest die result, and add the three remaining results together. Record this total and repeat the process until six numbers are generated. Assign these totals to your ability scores as you see fit. This method is less random than Classic and tends to create characters with above-average ability scores.
Purchase: Each character receives 15 points to spend on increasing his basic attributes. In this method, all attributes start at a base of 10. A character can increase an individual score by spending some of his points. Likewise, he can gain more points to spend on other scores by decreasing one or more of his ability scores. No score can be reduced below 8 or raised above 15 using this method. See Table: Ability Score Costs for the costs of each score. After all the points are spent, apply any racial modifiers the character might have.

The first method generates slightly higher ability scores, but the second method is balanced and fair - it guarantees nobody ends up with a "hopeless" character (well, if you WANT a hopeless character, try Dark Fantasy Basic).

If you PCs that are both random/surprising AND balanced at the same time, you must mix the two methods.

(bear in mind that ALL the numbers below can be modified by your race. Half-elves could start with 17 charisma, for example).

Take this example from the (very useful) Unearthed Arcana: Quick Characters. Just roll a d6 and check the table below. 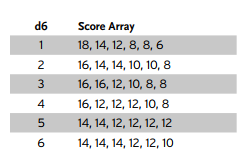 Six options are good enough to give you some variation. Choose randomly, or let players pick their choices. Fast and easy.

Or you can use some different method. Here is what I used for Dark Fantasy Basic, adapted for 5e:

1. Generate your six ability scores using the yin-yang
method: roll 3d6 for your Strength and subtract that
value from 21 to find out your Intelligence (for example,
if your Strength is 15, your Intelligence is 6). Do the same
for Wisdom and Dexterity, and then Constitution and
Charisma.
2. Raise all your abilities that are lower than 6 to 6.
3. Change your highest ability score to 16 (if lower than 16)
OR one ability score of your choice to 10. Then swap abilities
around if you wish, provided no more than half your abilities
are changed.

But what if you wanted one single roll with more than sixty balanced possibilites instead?

Fortunately, someone compiled all possible point buy results (the work is credited to "the forum user overpromises on the wotc community forums"). I just added a table and a few ideas of my own.

You can ignore the blue area (number higher than 66) or use it as written below - but the "blue" results don't stack.

But consider that starting with a "balanced" PC has some advantages too, since increasing your abilities during the game has a fixed cost. You might end up with a strong, well-rounded character at level 12 or more, even though you're going to suffer in the first few levels, since your main stat will be comparatively low. It is also worth considering that odd scores are usually a bad idea unless you want to pick feats that will improve them, or want to multi-class, etc.

Some people seem to have the opposite problem - they would prefer starting with a 17 even if they have a few 7s, 8s, or 9s... Which makes things balanced, I guess.

In this case, you might just let them pick from the table above.

Is this useful? Do you have a different method? Let me know in the comments!

By the way, I've been looking for a similar table for my "3d6 in order" OSR games. What I want is to get a "balanced" set of six abilities with a single d100 roll (or two...). If you know anything like that, please let me know.
Postado por Eric Diaz às 5:58 PM