Although I understand the reasons to have a certain "anti-cleric" feel (i.e., the intent of removing the cleric class from the game or making it less important somehow - as seen on Delta-s blog, as mentioned below, or Seven Voyages of Zylarthen) in D&D, I feel that some of the criticism is unwarranted.

At a first glance, the cleric can look like an "odd duck"* in D&D. You have fighters/mages/thieves that can use combat/spell/skills to defeat their enemies. Thieves are somewhere between fighters and magic-users, with access to some combat capabilities and some spell-casting.

(*BTW, we will disregard the fact that fighters/mages/clerics were the original classes, that the elf is the original fighter/mage, or that the thief class is as old as the paladin - we are looking at this from a mechanical, not historical, perspective, which is also why we're calling the magi-users "mages" etc) 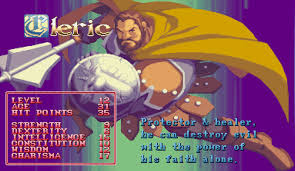 However, the cleric fits perfectly among the other three. Let's see:

These two classes, by themselves, would be enough to play the game. People who like the fighter/mage/thief combination often see the thieves as middle ground... But see, they have VERY LIMITED access to armor, spells. and HP. Of course, they thieves have their own abilities, which make them good attackers (sneak, back-stab) and explorers (climb, find traps, etc).

The cleric, then, fulfills a different role: with more access to armor and HP, and also lots of spells, but mostly focused on DEFENSE rather than offense.

Of course, you can also say that the mage is more focused on offense than the fighter (great firepower, less protection), then you have something like this: 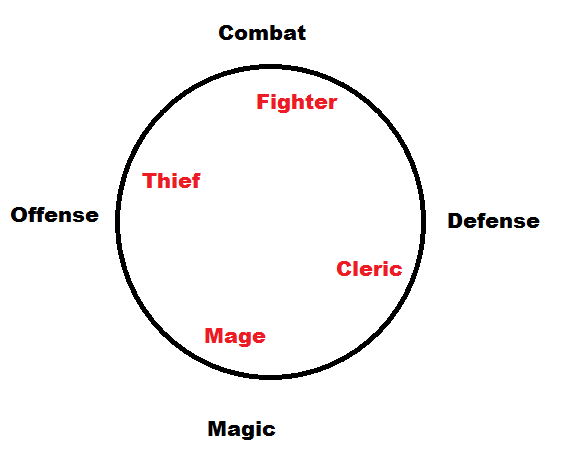 This is why my retroclone, Dark Fantasy Basic, uses the four "classic" classes rather than OD&D's original three, or fighter/mage/thief.

You can also turn the dials to create infinite combinations - good offense and magic for the elf, great defense and magic resistance for dwarves, etc. Or you can mess with range (clerics have fewer ranged options since they cannot use bows, for example), alignment (clerics tend towards Lawful), XP, etc. In all instances, there seems to be a place for the cleric.

Of course, there are DIFFERENT reasons to dislike the cleric. Delta's D&D Hotspot makes a great case against the class... This is a particular strong point:

As I've said on numerous occasions, it is the cleric class which makes the least overall sense in the context of pulp fantasy, and is the most fundamentally troubling class to be included in Original D&D. Among other multifarious reasons, the armored, adventuring, miraculous man-of-Catholic-faith is simply not a type you see very much in the roots of the genre, if at all. The inclusion really sticks out like a sore thumb in OD&D.

However, there seems to be a mechanical space for the "defender" type, maybe some type of knight, paladin or war leader, focused on protection/support and strong defenses. Someone like King Arthur, Aragorn, etc. Not exactly "pulp" but within what I expects D&D to be nowadays.
Postado por Eric Diaz às 3:32 PM