Some players missed the last RPG session, so we played some cooperative boardgames. Something I should do more often, it seems.

Anyway, the game had cards in addition to the board, and it got me thinking about how useful cards would be to my RPG sessions.

Come to think of it, using cards is also something I should do more often.

I think I disliked dealing with cards because of 4e; it practically required you to browse through your "cards" every round to find the right power, etc. I dislike that idea not only in practice but also on principle.

However, I used to LOVE D&D cards back in the TSR days... Specially those from Dragonquest! 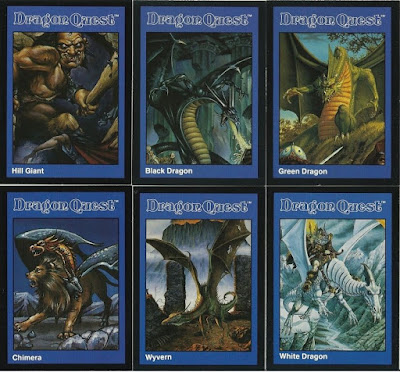 And I enjoyed playing with cards this week. One mechanic I particularly enjoyed is discarding; you have a maximum number of cards to hold, and when you get something new, you must discard something else.

Such a mechanic is obviously well-suited for items. With one obvious advantage: item cards do not make me feel like I'm looking at the character sheet, but at actual items - like my character would be in order to solve a puzzle, decide what items to carry, etc.

Cards representing monsters and spells are cool as well, mainly to avoid lots of page-flipping.

I think the main difference is, these are things you actually have - most are things you can actually see (unlike a "clever shot" or "rapid shot" from 4e). They strengthen immersion instead of making you feel like you're playing a character sheet instead of an actual character.

Of course, you could argue that there is no difference between a "rapid shot" power and a "fireball" power. And I agree, up to a point - the main reason I'd like to use spell cards is because there are SO MANY spells to choose from that this would just make things easier.

However, there is another conceptual difference, at least in my head - the fireball is an actual THING in old school D&D. Anyone can tell when a wizard is using a fireball. It EXISTS in some vancian spell slot inside your head. You might even CHOOSE the spell BEFOREHAND, and CARRY it in your mind - it occupies SPACE. You can write the spell down in a grimoire or scroll, etc. A "rapid shot" is not a "thing"; it REPRESENTS an action an archer could take. If you miss a "rapid shot", it is likely that no one could even tell you TRIED to "rapid shot" in the first place... unlike a fireball.

Yes, they are pretty much the same in 4e and, you could argue, in 5e, since spells slots work a bit differently now. But anyway, I prefer this old school flavor.

Anyway, now I feel like buying some cards. I didn't buy many back in the day because, well, they were too expensive. Looking at cards now... They are still expensive in most cases, and just UGLY in other cases. But we'll try anyway.

Monsters look cool enough, and the art is certainly high quality. However, I really I prefer the old ones (see above). Much more inspiring, with movement and backgrounds... I don't quite get it. WotC has access to these old classic pieces of art. If that is not enough, they should at least learn something from Magic the Gathering. Have you seem any MtG monsters without movement or backgrounds?

Spell are not illustrated, but are good enough, I guess. They have "martial power" cards if you like that, too...

Prices are reasonable - not much more than, say, 10c per card in most sets. 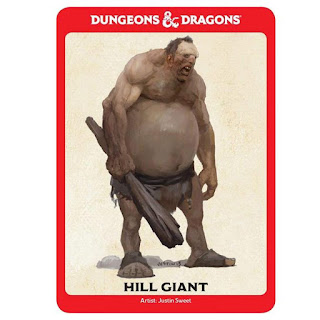 Unfortunately, item cards - my main interest - were apparently done in such a lazy manner that it turns my stomach. Just check some customer images on amazon.

The Deck of Many Weapons

The art is a bit cartoony, but looks cool and gets the point across. I find this a bit expensive - 15 dollars for 33 cards? - but I might consider it. Find it here. 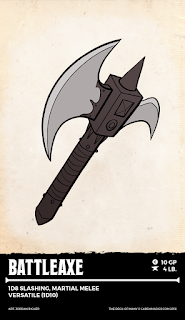 There is also this*. It seems to be the most functional of the bunch, since I can add my own info (although it doesn't contain much info of it's own - for example, the damage, weight or cost of the greatsword below). Decent price, too. The art seems too "computer-based" for my tastes, but good enough.

[*Affiliate link. By purchasing stuff through affiliate links, you're helping to support this blog]. 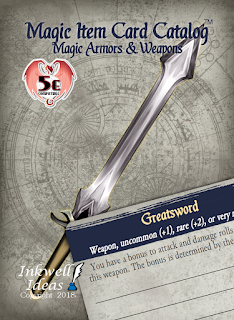 There is plenty of FREE cards online. Some of it is of higher quality or usefulness than the "official" stuff, but you must print them for yourself... Unless there is an easy way to do that, it won't work for me. But if you're interested, check this and this.

Have you ever tried playing D&D with cards? Did I miss some interesting product? Let me know in the comments!
Postado por Eric Diaz às 2:42 PM