In a little follow-up to the last post, I started wondering if all those spells in 5e could actually fit a card... Anyway, tried to do my own version. Just got a list of spells to cut out the ones the PCs used, for easy reference...

Well, the spells took LOTS of pages. These pages dt didn't, however, contain that much information; many of the words in 5e (around 40%, I'd guess) are useless repetition; they don't contain any new information. Some of it could be cut by using abbreviations.

For example, look at this spell:

Acid Arrow
2nd level evocation
Casting Time: 1 action
Range: 90 feet
Components: V S M (Powdered rhubarb leaf and an adder's stomach)
Duration: Instantaneous
Classes: Wizard
A shimmering green arrow streaks toward a target within range and bursts in a spray of acid. Make a ranged spell attack against the target. On a hit, the target takes 4d4 acid damage immediately and 2d4 acid damage at the end of its next turn. On a miss, the arrow splashes the target with acid for half as much of the initial damage and no damage at the end of its next turn.
At Higher Levels: When you cast this spell using a spell slot of 3rd level or higher, the damage (both initial and later) increases by 1d4 for each slot level above 2nd.

Acid Arrow (2)
Evocation; 1 action; 90'; Instant
Components: V S M (Powdered rhubarb leaf and an adder's stomach)
Wizard
A shimmering green arrow streaks toward a target within range and bursts in a spray of acid. Make a ranged spell attack against the target. On a hit, the target takes 4d4 acid damage immediately and 2d4 acid damage at the end of its next turn. On a miss, the arrow splashes the target with acid for half as much of the initial damage and no damage at the end of its next turn.
Higher slots: The damage (both initial and later) increases by 1d4 for each level above 2nd.

No information is lost.

(To be honest, a single "deal damage, choose type" spell template would be enough for me; one page and you get rid of 50+ spells. But that's a different matter)

The same pattern (unnecessary letters, words and sentences) is repeated throughout the book.

"On a short or long rest" is used again and again where "on a short rest" would do.

Darkvision is described over and over - but the rules about light and vision still do not make much sense.

The contents of monster stat-blocks get repeated over and over again or gain needless details. Look at the dragons in the Monster Manual. 30 pages? They could have used 10. Or less... Just check the DCC RRG. Or the Rules Cyclopedia. Or wait a couple of months for my monster book! ;)

Of course, using things like HP instead of Hit Points, saves instead of saving throws, etc. would make the book even smaller.

I know this sounds like nitpicking, but the size of 5e books (and the amount of words in them) is a HUGE factor for me - and, I would bet, for many new players. 5e is not THAT complex, but it LOOKS complex because of these things.

There would be a lot less page-flipping and weight-carrying (and less intimation to new players, I guess) if the books were more concise.

But I guess WotC would make less money? I dunno. Seems to me that adding lots of "casual" players would be great to D&D.

After spending more time than I should with this exercise I gave up on buying spell cards for now. Maybe I'll still get monster cards, I dunno. Certainly items.

To end this on a positive note, here is the stuff I like.

First, monster variations. You know, when Curse of Strahd (or the MM itself) says "this monster is like a zombie, but wearing plate armor", or "treat this NPC like a noble, but she is carrying a +1 rapier"? That is more than enough for me and provides interesting twists to familiar monsters. I wish more books would do the same (and I will give you a book based entirely around this idea soon).

Second, games that manage to be simple and short without being minimalist or incomplete.

You can always try my Dark Fantasy Basic; 5 classes with lots of variations, 20 spells that can be cast at any level, and about 50 pages. But if you're tired of hearing about my game... here is another idea, specially if you like the idea of a B/X and 5e mix, but would prefer more 5e than B/X.

Try Into the Unknown [affiliate link - by using this, you're helping to support this blog]. 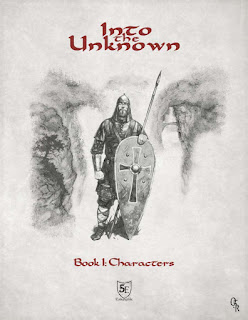 About 250 pages (including everything), 13 bucks for the PDF (25 for the print version), straightforward, concise and EFFICIENT. Few classes, but a lot more customization than B/X. Monster have small stat blocks, with morale and number encountered! And just look at the guidance spell:

Guidance
Priest (Divination)
Range: Touch
Duration: Conc. (up to 1 minute)
Once before the spell ends, the target can roll a d4 and add the number rolled to one ability check of its choice. It can roll the die before or after making the ability check. The spell then ends.

In short... that's AWESOME. Congratulations to Anders Honoré! Check his blog The Setting to End All Settings, BTW.

If you want to introduce someone to D&D 5e, I would prefer this game even to D&D basic. Great stuff! It could save lots of folks some time, money, patience... and maybe spare a few trees!
Postado por Eric Diaz às 7:11 PM