Combat maneuvers made easier (for BD&D, AD&D and OD&D)

I wrote about the subject before, but here is a different take, even simpler, and without using anything resembling dice pools, like I did the first time.

The thing is: I like my simple martial maneuvers in BD&D. They really make the fighter more interesting without adding much complication, feats, etc. The Rules Cyclopedia has a few interesting options, such as smash, parry and disarm. Modern interpretations of the classic rules, such as the elegant rules in LotFP and this cool compilation by Randall Stukey, make things simpler when compared to the RC.

Still, I wish for something both simpler and more flexible, and more suited for my group.

The problem with the original rules for martial maneuvers in the RC, as I see, is threefold:

- Combat maneuvers can get too complicated (too many numbers to remember).
- There is little decision involved - you either use it all the time, or never use it.
- They involve needless class/level restrictions (only fighters, etc).

Let's take a look at "Smash" for example:

Smash
This is a Fighter Combat Option maneuver, first available at 9th level to fighters and mystics, and at other experience point totals to demihumans (see their experience tables). With this hand-to-hand maneuver, the character automatically loses initiative and takes a - 5 penalty to the attack roll (he still gets his Strength and magic adjustments to his attack roll).
If attack hits, the character adds his Strength bonus, magic bonuses, and his entire Strength score to his weapon's normal damage.
For example, a Strength 17 fighter ( + 2 to attack and damage) using a sword +2 ( + 2 to attack, 1d8 + 2 damage) would perform a smash this way: He rolls to hit with a net penalty of -1 ( + 2 + 2-5). If he hits, he rolls ld8 + 2 (17+ 2+ 2) for damage!

Smash is an important maneuver in the RC, making Fighters way more powerful than they would be without it. But is is easy to see that:

- It is needlessly complicated (unless you're used to the RC, of course) - just see the last paragraph. Also, why a -5 penalty in Smash and a -4 penalty to enemies while using Parry?
- It is too powerful when compared to a normal attack - after level 9, a Fighter will Smash most of the time against every monster with a couple of HD or more.
- It depends on class and level, so a Fighter doesn't get most of the maneuvers until level 9, and some classes get no maneuvers at all - which some people like, but goes against my "D&D Unleashed" philosophy. 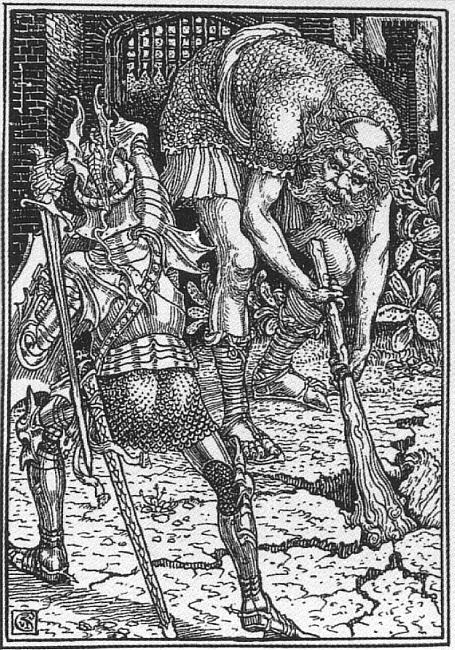 This is easy to fix, of course:

Smash
With this hand-to-hand maneuver, the character automatically gets -5 to initiative and to the attack roll, and a +10 bonus to damage.

But let me propose an alternative that replaces Smash, Parry, Cleave, Dual Wielding and multiple attacks.

Take your BAB (or Fighter level, etc - for this purpose, I would use BAB=Fighter level+STR or DEX, not 2/3 level like the RC uses IIRC). Do whatever you want with it, as long as you split it evenly, round down, and creates no bonuses smaller than +2 ("no bonus smaller than +2" is a general rule in my games because... granularity).

Your choices are limited only by the weapons you're using (or "how you narrate your attack" if that is what you're into).

* Attack with +6 and deal +6 damage if you have a two-handed weapon.

* Attack twice (+6/+6) if you have an weapon in each hand, although you probably have some disadvantage in the second attack unless you're ambidextrous.

* Attack with +6 and get a +6[-6] bonus to AC if you have a shield or parrying weapon (although they may break etc). You can probably do the same with a dodge but you lose your attack, or use up your movement, etc. Bear in mind that this is quite powerful without restrictions.

* Trip, disarm, ensnare, etc: +6 to attack and if you hit roll 1d6+6, and if this result is greater than 10% of your opponents' HP, you achieve the intended effect (or allow a saving throw with -6, or use the rules for subduing dragons, etc).

* Maybe do any of that with a quarterstaff? Here is a good reason to have a two-handed weapon with low damage.

* If you like weapon proficiency, you may require that to use each maneuver (I am not a big fan, to be honest).

I am tempted to say you can use this against multiple opponents, instead of using multiple attacks or Cleave. If you have an adequate weapon, you can attack four opponents in the same action (+3/+3/+3/+3), by swinging at them, for example.

I would advise against allowing multiple attacks against the same foe under normal circumstances, or this would turn into a math exercise to see how to deal more damage. Well, maybe a "combo" would work with some kinds os weapons: do the first attack as normal, and the defender gets some advantage while defending (or just keep attacking until your first miss).

Most of other problems (using a inadequate weapon, etc) can be resolved using advantage and disadvantage from 5e.

There are lots of system for martial maneuvers out there; I hope you enjoy this one!
Postado por Eric Diaz às 12:52 PM 2 comments:

Happy new year to all!

Just a quick preview of what is coming up on this blog in 2016. Right now, my main priorities are:

Basic D&D. I'll continue to write stuff about Basic and the Rules Cyclopedia, some of my favorite versions of D&D, and TSR D&D in general. Next posts will include more ideas about creating monsters, martial maneuvers, magic, and skills. I'm tempted to create a PDF compilation of those rules, maybe making it a complete game in itself, although there are plenty of those already.

D&D Fifth Edition and actual play. I am planning on writing about my ongoing "Lost Mines of Ravnica" campaign, using fifth edition, as well as discussing further house rules as they appear. Professional stuff might stop me from playing as much as I want, but I am sure I will find some time for it.

Old School Ramblings. I have a couple more of articles waiting to be written, one about "Game Masters" and the other about old school mechanics in general.

Days of the Damned. My apocalyptic, dark fantasy, "new school" game is mostly written, but still missing most of the art and layout. In 2016, I plan to do some additional play-testing before publishing it (as soon as it is ready, hopefully late 2016, but I can't be sure). I will be writing about it here from time to time. If you want to have an idea of the visual inspirations for the game, you can follow my collections in Pinterest, here and here.

Chronicles of the Mad Sun (for the lack of a better title for now). I'll expand on the ideas presented here and here and, hopefully, create a PDF with all of it in the future if there is enough interest in the subject.

General RPG design and random stuff. You'll see more of that, obviously. Stuff about settings, dice, movies, TV, literature, and so on.

Adventures, bestiaries, and other media. I'll probably write an expansion on my one page dungeon in the future, maybe turning it into a DCC character funnel. The whole thing will probably be no longer than a dozen pages. I have a few ideas for a little "monster manual" of sorts, but it is unlikely that it will see the light of day in 2016. I  have been contributing to some other media as well, so I'll keep you updated here.

I'm making a separate label for each of those subjects that didn't have a specific label already, so you can see what I have already written and follow future posts, if you like.

If you're interested in those subjects, consider following me here at the blog or circling me over G+. Also, feel free to let me know what you think about this plans.