The amounts of food and water required to keep a group of adventurers sustained is usually ignored by many groups. After all, we don't usually weight what we eat, and nor should fictional heroes, right? On the other hand, if you're playing a game that focuses on hiking, hex-crawling, survival and resource management, like some versions of D&D, this data might be useful.

D&D 5e has very interesting rules about food and water consumption. Let's take a look on what basic D&D says: 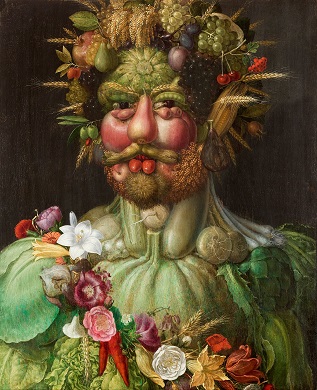 Now, there are a few ideas here that are worth mentioning.

Starvation and dehydration do not cause damage. Instead of losing HP, a character gets exhausted after a few days without food or water (although your max HP is halved after a while), which means 10th level characters are as likely to die of starvation as 1st level characters if they have the same Constitution. Hit Points - the usual gauge of survivability - aren't important.

Interestingly, the same isn't entirely true for water, as a character can survive longer with little water if he has a good Constitution saving throw - which might be affected by proficiency (which is determined by level).

The whole exhaustion mechanic is very cool, but I dislike the idea that starvation affects characters of all levels equally. At least it is somewhat "realistic", right?

Well, in fact, the numbers are a bit unreal. The numbers below (for the real world) aren't exact figures, either, but let me give you some rough examples of what I mean when I say D&D figures strike me as odd. This isn't particular to 5e. 3e has similar figures (with some extra issues I won't discuss for now).

An average american eats about 4 pounds of food per day (with little exercise) - an average D&D character needs about one pound of food every four days (with lots of exercise). Okay, I get it - we eat more than we need, too many carbs, etc. But one pound a day is too little for active characters (and if you're weighting your food in D&D, it is because you're travelling around and carrying stuff, not because you're on a diet). You can probably survive with a pound of food a day while active if you're eating lots of fat and protein, but a couple of pounds would be more reasonable.

The idea that after three days without food you can go "back to normal" by eating normally for a day is probably a mistake and, if you're weighting food at all, must be altered (or ignored) or there will be no reason to eat every day (unless "the full required amount" is meant to say the character must eat three days worth of food in day or something similar, which is doubtful). I would suggest removing the sentence and letting the GM deal with players that abuse the system.

The idea that you can spend 3+CON days without food also doesn't seem a good idea for gaming purposes, as characters will have to check for starvation in different days.

On the other hand, after about 10 days without food, most characters will die, which is excessively harsh, specially if you aren't very active (trapped in a cage, for example).

As for water, a gallon a day is a reasonable figure if you're walking all day. And the rules for water work better than the rules for food, in my opinion - I can see no reason to use two different sets of rules.

The good thing about "one pound food, one quart of water" is that it's easy to remember - provided that you're used to imperial units and knows how much a quarter of water weights (8.33 pounds) without checking - because encumbrance, if you're counting, is measured in pounds. My own mnemonic device is "10 pounds of food and water per person per day of travel".

In any case, here is my rewritten version to make things easier and a bit more reasonable.


Food and Water
Characters who don’t eat or drink suffer the effects of exhaustion (see appendix A). Exhaustion caused by lack of food or water can’t be removed until the character spends a day eating (or drinking) the full required amount.
A character needs two pounds of food and eight pounds of water (about a gallon - double the amount of water if the weather is hot) per day. After every day without enough water or three days without enough food, she suffers one level of exhaustion and must make a DC 15 Constitution saving throw, or suffer two levels instead. Consuming at least half the required amount of food (or water) doubles the number of days before each saving throw.

And if you think high level characters should always get a better chance, you can add proficiency bonus to everybody, and double it for characters proficient in Constitution saving throws.

UPDATE: check out my new take on a similar rule.
Postado por Eric Diaz às 11:42 AM