[UPDATE 10/12/19: blogger keeps destroying my tables - specially when I'm using Chrome... So I substituted tables for images. Click to enlarge. I also update and srtremalined all ideas presented here into a book - see below!]

I also wrote a detailed analysis of each weapon property, and a perspective on weapon damage. Might be worth checking those ones out first.

Anyway, here is the table for easy reference (source):

As a general rule, simple weapons deal 1d6 damage, and have one or two positive properties.

Club - This is just a very simple, cheap weapon, not much better than an improvised one. Fair enough. Use this if you have no money or no options.

Greatclub - This weapon is useless when compared to the quarterstaff.

It has a single negative property, deals 1d8 damage, and is significantly heavier than a quarterstaff, which is equal or better in every aspect. There is no class, feat, or special rule that can make this weapon useful. Which is a pity, since the weapon looks kinda cool for cavemen-type barbarians (and Bobby, the Barbarian!). This weapon would be fine if we had a costlier two-handed simple weapon with 1d10 damage... Or just change the damage to 1d10 and be done with it.

Mace - This is the worst offender IMO.

1d6 damage, NO properties. Having an useless weapon might not be a big deal. But having an useless mace, the most iconic weapon for clerics, including Aleena the cleric - arguably the most memorable in D&D history - is adding insult to injury. I can only assume this is a mistake by the designers, or a typo. Making the mace versatile fixes some of those issues. It would become a worse, more expensive version of the spear, but close enough that I wouldn't care that much.

Quarterstaff - This is a bit ridiculous.

It manages to be better or equal to BOTH the mace and the greatclub, two weapons that have no function in the game RAW. It is 25 times cheaper than the mace, for example. If you want to show that weapon prices do not matter, please don't include useless text in the game. Also, there is no reason for the wizard's iconic weapon to be better than the cleric's one.
But that's not the worse part. Making the quarterstaff versatile allows you to use it with a shield, or even one quarterstaff in each hand if you have the right feats - which I personally find ludicrous.
This is probably a mistake, which is illustrated by the PHB errata: "Two-Handed (p. 147).This property is relevant only when you attack with the weapon, not when you simply hold it.". So, this weapon was probably meant to be two-handed, but before the errata it would make it useless for wizards - they often need a hand to cast spells.
This should be a cheap, light, two-handed weapon, 1d8 damage, mostly intended for wizards and monks. Or even a double weapon.

Sickle - this weapon isn't bad, but could be better. Small, 1d4, slashing, light... In short, good enough. I don't remember many characters that go around fighting with a sickle, but it is in D&D's history (through the druid). The designers probably wanted to portray this weapon as a suboptimal farming implement. Fair enough. But we should have a small, finesse, slashing weapon too, because this is a very common trope.

Spear - very good for a simple weapon, not good enough for all spears. This weapon is good as written, but we should have some "military" versions of the spears as martial weapons. A heavy spear, a long spear (not a pike!), a finesse spear... Well, there ARE a couple of "spear-like" weapons in the martial list - the trident and the pike - but unfortunately they are really, really bad.

As a general rule, simple weapons deal 1d8 damage, and have one positive property (often versatile 1d10, which isn't a great property). If they are heavy/two-handed (all heavy melee weapons are two-handed), they deal 1d10 to 1d12 (or 2d6) damage.

Flail - As expected. Lighter than the battleaxe, but not versatile. I am not sure this is a real weapon, but I like how it looks...

Glaive - As expected. The fact that there is an identical weapon called halberd bothers me. I can only assume this is made for nostalgia's sake. 5e really like weapons that have no clear mechanical function.

Greatsword - The greatsword is better than the greataxe the vast majority of the time, ESPECIALLY if you have the GWF style; the greataxe might be marginally better for barbarians. It is also a bit more expensive. Fair enough, I guess, although I, personally, would like to see some reason for non-barbarians to use the greataxe.

Lance - a special weapon, only useful if you're mounted.

Longsword - As expected, more expensive and a bit lighter than the battleaxe.

So, this is a spiked mace. Also, a heavier, more expensive version of the war pick. Not a single reason to use it. Why is a mace a simple weapon and the spiked mace a martial one? Also, piercing damage? I would think most of the damage would be bludgeoning. So, the morningstar is bad against skeletons. Go figure. 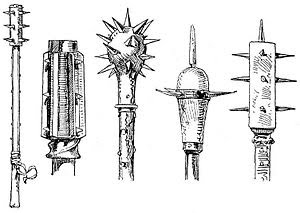 Nothing terrible about this weapon - but there is not much use for this extremely heavy weapon, either. Also, why is this so heavy if it has the same reach as a halberd? Yeah, real pikes should have a longer reach, with the same "caveat" as the lance ("You have disadvantage when you use a lance to attack a target within 5 feet of you."). They should also be treated as a "formation" weapon, not something you carry around in a dungeon.

Call it "half pike" or something equivalent to a heavy spear and you're done.

Why did they make this the only 1d8 finesse weapon I cannot understand. They basic encouraged all Dexterity builds to pick it unless they dual-wield. It is the ideal weapon for them to use with a shield, which looks a bit off. But I'm not overly concerned with it.

Scimitar - as expected - 1d6, two proprieties. It is a light weapon. It weights 3 pounds. The rapier weights two pounds. It is not a light weapon. But that's okay because "light" means "small" in 5e. VERY easy to understand.

Trident - Useless. Identical to spear, heavier, and five times more expensive. Some argue that WotC put this in there to show some weapons are useless. Well, we should have figured that by now anyway. So, the trident isn't mean to be a "real" weapon, only something that gladiator's used for show. If that's the case, it didn't deserve a separate entry. In any case it is surely nice that the designers pay this homage to realism before they describe 200 spells... Now I can sleep peacefully because I know they care.

War pick - as expected; no proprieties, but light and cheap. See morningstar.

Whip - a special weapon. Little damage (1d4), but the only one-handed weapon with reach. Could be 1d6, I guess, but good enough. The low damage must be another homage to realism, I guess, since the whip doesn't seem like a real weapon to me.


But... weight and price do not matter!

If they don't they should have been kept out of the book, there is enough useless data as it is. But, really, you can ignore price all you want, I agree - it doesn't really matter for PCs. But there is a whole world out there where prices should make SOME sense, at least WITHIN ordinary weapon lists (balancing it with magic weapons is hard, I know). Weight is hard to ignore, specially for weapons such as the greatclub and pike. If you're using the encumbrance variant, you cannot wear plate and carry a pike if you have Strength 15, for example.

What about the ranged weapons?

Honestly? They are mostly good as they are. Balanced, well thought out... People who insist that weapon's needn't be balanced must really dislike these ones.

But how can we fix it?

Glad you asked! I'm writing a whole "Manual of Arms" for 5e. If that sounds like a good idea, stay tuned. If you just want a better table... Here you go. 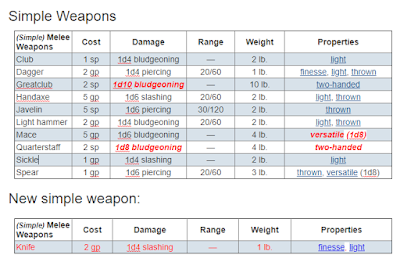 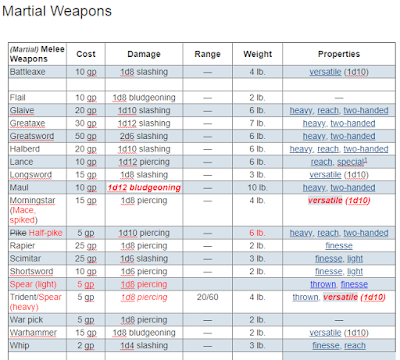 Notes:
Yes, I do realize that I made a light spear without the light property, and a heavy spear without the heavy property. As I've said before, the "light" and "heavy" property mean "small" and "bulky" and have nothing to do with weight. In any case, "agile spear" and "military spear" might work too.

I'm certainly not the first one to rework this list and I probably got many ideas form other people.

I've seem some suggest 1d4 bludgeoning/1d4 piercing for the morning star. I love this idea, although it might be a bit too fiddly. I would even dare to make the morning start identical to the mace, PLUS 1 extra point of piercing damage. Again, probably too fiddly. The 3e solution seems decent: "Some weapons deal damage of multiple types. If a weapon is of two types, the damage it deals is not half one type and half another; all of it is both types. Therefore, a creature would have to be immune to both types of damage to ignore any of the damage from such a weapon."

I "fixed" some weapons by giving them the versatile property. This is not a great property, but it makes plenty sense for these weapons (versatile weapons tend to be heavier), and keeps them on par with the others.

I DO have an even simpler solution, but it includes introducing new mechanics. I'll leave it to the next post.

Wait, do I even NEED a list of weapons?

Not really, but I like it. Anyway, if you don't:

If you find any of this useful, or if you'd like to see  a "Manual of Arms" for 5e, let me know in the comments. I think I've been focusing on 5e weapons too much lately, so I might change subjects soon.

UPDATE [10/12/2019]: I finally updated and organized this post (and more!) into a small book - my 5e Manual of Arms: Weapons! If you liked this post, you'll certainly like my book.

Try my 5e Manual of Arms: Weapons or any of my books. If you prefer comic books, check The Displaced series. Many titles are free!


Thank you all for your audience and support!
Postado por Eric Diaz às 7:27 AM