The main difference between them is...

Bludgeoning damage, for example, is good against skeletons, as they are vulnerable to this type of damage. Fire elementals are IMMUNE to fire and poison damage, so they take NO damage at all from these sources.
Gabriel Anhaia (from the Facebook community D&D 5E - RPG BRASIL) made an interesting compilation of various monster resistances are vulnerabilities across multiple books. I just added color and a subjective "grade" (from 0 to 10) to each damage type (click to enlarge):

This is all quite arbitrary and somewhat incomplete, but is it useful as a visualization tool.
Bear in mind that resistances, immunities and vulnerabilities are not common, which means they seldom apply. So, while 5 points of force damage are better than 5 points of poison damage, 6 points of poison damage may be better most of the time.
What is the best damage type? Probably the force, since no creature has resistance against it. Radiant and thunder are also very good.
What is the worst damage type? Certainly the poisonous. There is a lot of resistant creatures and even more that are completely immune.
What is the best type of weapon damage? Between slashing, piercing and bludgeoning, the latter is slightly better.
Note that "magic damage" is not a separate type of damage, but another classification, parallel to these 13 types. The damage of a magic weapon can be slashing, piercing and bludgeoning, something else (the Sunblade causes radiant damage, for example) or a combination (the Flame tongue causes slashing or piercing damage, plus fire damage).
Likewise, fire damage can come from a fire or a fireball, etc.
In addition, while resistance to slashing, piercing and bludgeoning damage from nonmagical weapons is somewhat common (as seem on the table), resistance to theses damages is very rare when they are caused by magical weapons. I would imagine magical weapons are almost on par with radiant and thunder.
What is this good for? Choosing your spells, features, etc... or creating your own!
Additional reading:
http://methodsetmadness.blogspot.com/2019/01/damage-types-d-5e.html
Postado por Eric Diaz às 10:17 AM No comments:

Railroads (and some sandboxes)

The action of playing RPG consists, mainly, of making relevant decisions through your character.

This definition is important, as you will see below.
RPG adventure modules (and campaigns) can have several types of structure, two of which are mentioned more often: the railroad and the sandbox.
(Until the end of this article, I will argue that these words describe MOMENTS in the adventure, not adventures)
A "railroad style" adventure is one in which the characters never leave the pre-defined tracks in the adventure. That is, the plot goes from A, to B, to C, to D, regardless of what the characters do.
So you could already say that "railroads are not role-playing games". After all, players don't make relevant choices. It may be a theater, the narration of a story (sometimes shared), it may even be a way of TEACHING RPG, but it is not RPG, strictly speaking. 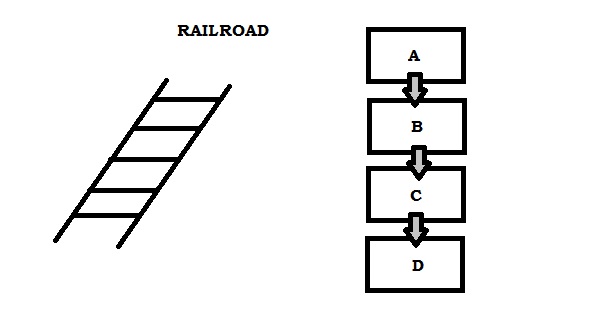 Sandbox is something akin to the sandboxes play in. Inside this "box", the characters can do whatever they want, in the order they want. The actions of the PCs will have their own consequences, and these consequences will form the adventure (or "story"). It is also called "open world".
This is very common in current electronic role-playing games like Skyrim, The Witcher, etc. (compare with the first Mario Bros., where the option was to go forward or die - and the fun was not making good choices, but playing with agility and precision). 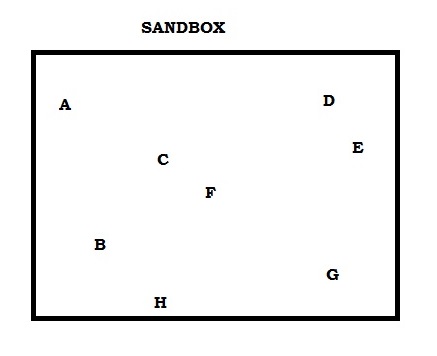 Often, the two terms are considered antonyms, but I agree with Justin Alexander when he says that it is not exactly that. Anyway, I'm not discuss this now. I will focus on the railroad as a problem to be studied (and maybe solved), and leave the sandbox for a future post.
These two structures resemble physical structures, but are actually abstract ideas. A dungeon with four rooms arranged in a straight line is very reminiscent of a railway's structure, while a map appears to indicate a sandbox. But this is not always true.
The railroad is defined by the lack of relevant choices on the part of the players.
Let's say, for example, what adventure says that he has to face a dragon burned in village E. They can go to villages D, F or G, but in none of them there are useful weapons, allies or clues against the dragon, and and the dragon attacks the PCs after five days regardless of what they do.
Another example: the PCs arrive in a room with 4 doors (A, B, C and D). In one of them, there is the villain. In the other three, there are some treasures. But no matter which door the players choose, the villain will always be behind the first door they open (to ensure that players do not run away with the treasure without facing the main villain). 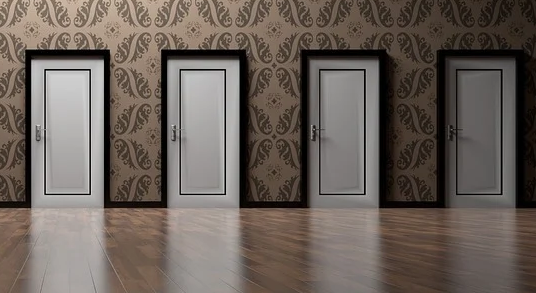 So the railroad can happen, basically, in two cases:
1) Because there is no choice (for example, there is only one door) or;
2) Because the choice does not matter (there are several ports to choose from, but the result is the same).
Note that determining the outcome of the players' choice just by rolling a die does not necessarily solve this problem. For example, if you're going to roll 1d6 to find out if the villain is behind the door, the player's choice didn't matter either (unless, for example, they know there is such a risk, and can limit the number of doors they open, etc.).
[Notice that this situation is EXTREMELY COMMON in many modules, even those which wouldn't commonly be considered "railroads"; players must choose one of two or three doors without any information.]
But what if you rolled the die BEFORE they opened the door? Although it looks different, for players the result is often the same as if you roll AFTER they open the door. And even if you chose any room to place the villain when designing the dungeon ... sometimes the result is unchanged.
How to explain this?
In this case, the players DO NOT HAVE ANY INFORMATION that allows them to make a decision. Their decisions end up being random. But there is a very significant difference there: if the villain is already defined BEFORE they open the door, players can SEEK that information. They can, for example, put their ears to the door and try to listen, or knock on the door and hide. These are RELEVANT CHOICES.
But what if the villain is silent, waiting for the PCs, and there is NO way to get that information? Then, we are back to where we started.
But then... is EVERYTHING a railroad? An unexpected surprise for the PCs is enough to ruin the module? Well, no. That's what I want to demonstrate: railroad is a MOMENT that happens in all adventures: that situation in which the players' choices do not exist, do not matter, or are made randomly.
Some adventures are railroading ALL THE TIME. In others, we have only a few points and events like that, but a lot is determined by the actions of the PCs. The adventures that give a little space for relevant choices deserve to be criticized for being too "railroad-y".
But much worse than that are the adventures that try to FORCE the railroad, inventing bizarre ways to make the actions of the PCS irrelevant.
For example, saying that the villain cannot be faced before the last part of the adventure so as not to spoil the ending. Or saying that if the PCs do not accept the king's mission to kill the ogre, he will send the royal guards to beat them up ("Say, your IMBECILE highness, why don't you send the royal guard to kill the ogre instead?).
It is common for novice GMs not to remember to give players many options. No problem. As players and GMs learn, they will realize that RPG is a game of infinite possibilities. What really should be avoided is this second case: forcing the railroad when players have already invented other interesting options.
Justin says "Railroads happen when the GM negates a player’s choice in order to enforce a preconceived outcome".
This definition is incredibly useful; it is what I call a "forced" railroad. Fortunately, this is much rarer today... But it still happens, even in D&D 5e campaigns, as we will see.
---
Further reading:
https://thealexandrian.net/wordpress/36900/roleplaying-games/the-railroading-manifesto
The post below is the main inspiration behind mine. In fact, this is not muich more than a summary I've felt like writing. I've found the idea of a "forced" railroad is useful to explain to new gamemasters what they shouldn't do, since I've modules described as "railroads" more often than GMs.
http://methodsetmadness.blogspot.com/2020/03/rpg-and-design-iii-crunch-is-fluff.html
I think I've never wrote my definition of RPGs, but that post has some ideas.
http://methodsetmadness.blogspot.com/2020/04/rpg-and-design-vi-unproductive-fluff.html
I do mention "meaningful choice" here.
Postado por Eric Diaz às 9:39 AM 6 comments:

DTRPG's Halloween sale is on!*
Almost all of my own products are 25% off due to the sale, since I write mostly dark fantasy stuff.
Dark Fantasy Basic and Dark Fantasy Characters are close to getting a gold badge! Can we make it until Halloween?
Well, just in case, here are some coupons with bigger discounts for the readers of this blog. They are good until Halloween!
https://www.drivethrurpg.com/browse.php?discount=91ccc8a4d3
https://www.drivethrurpg.com/browse.php?discount=97a265c93f
Dark Fantasy Places is still free.
In addition, you can get free stuff on the site by clicking on the pumpkins, hats, ghosts, bats, etc. Just click all the menus to find icons such as these: 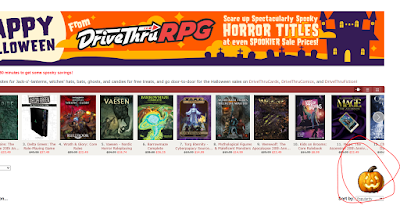