"D&D is only about combat" - something I hear more often than I'd like.

I don't think is true, at least not in 5e (you could MAYBE say something like that about 3e or 4e, but I don't play these much nowadays; if you want a combat-focused game, try Mythras).

[BTW, you can tell that I mean it by the number of posts about combat in this blog - more weapons, more maneuvers, more options, etc.]

Look at the PHB: the combat chapter is quite small. The list of weapons is very short and, dare I say, underwhelming. Many races and classes have powers that are related to investigation or interaction (darkvision, languages, etc). "Martial" classes without spells are rare.

The DMG has a few extra combat options, but also honor, sanity, etc. It has plenty of magic weapon, though; see below.

The MM monsters are a bit more combat focused, but they have plenty of lore, art, and non-combat aspects (alignment, languages, some skills, etc). Although I DO agree that encountering monsters is a bit too combat focused in this edition, for the lack of reaction rules and similar mechanics.

D&D's pillars are, supposedly, combat, exploration and interaction, which is a fair thing to say (I might add "character development" but that's another story).


Another thing D&D is about is MAGIC. It takes the biggest chapters, we get more spells with every splat (not a dozen new melee weapons IIRC, two or three new combat styles, but 200 new spells since the core books, or something).

In fact, if we want more tools for combat, we don't get many alternate rules for combat, but more combat spells (and magic weapons).

Maybe you can say that D&D is mostly about magic, or even magical combat... But ordinary combat?

Take another look. There are no details about the interaction between weapons and armor. Only one type of shield. No reason to use a (non-magic) mace RAW. No specific ways of hitting a specific body part. Grappling is very simple. Disarming is an optional rule. This is NOT a game with an exaggerated focus on combat.

I've played many RPGs in which combat was downplayed (say, Call of Cthulhu or Unknown Armies); D&D is certainly combat-focused when compared to those. But it is unfair to say D&D 5e is much more focused on combat than, say, GURPS, Mythras, Pendragon, or even Castle Falkenstein (which has some pretty specific dueling rules). I won't even go into Riddle of Steel, Dark Souls (I don't even know if the RPG I read is official, but...) or other games that ARE much more focused on combat.

I feel the same in practice (although that's anecdotal evidence): we spend only a fraction of our 5e games doing combat, and in my last CoS session there was no combat at all. My experience is not universal, but it is one example on how you can play D&D without focusing on combat.

I posted something similar over reddit and got massive criticism. Still, I believe readers of my blog will have a better understanding of this issue.

As you might know, I am writing an extensive monster generator. The name is, so far, is TERATOGENICON.

It's mostly system-less, including only a few pages about 5e and Dark Fantasy Basic.

In fact, it is 100% written. However, there is still revision, play-testing, layout, and some AMAZING art to come. Seriously, this is looking good:

But is it GOOD? I really think so! Since I'm biased, I'll say that if you like THIS (link below - not working that well in firefox, unfortunately), you'll enjoy reading it. If you like my Dark Fantasy series, you'll like it too.

Here are two pages (notice that the art and layout aren't finished): 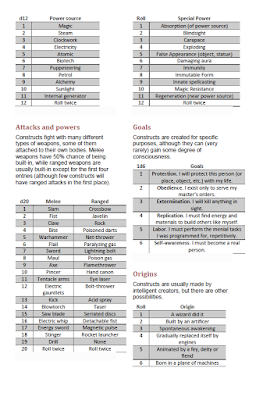 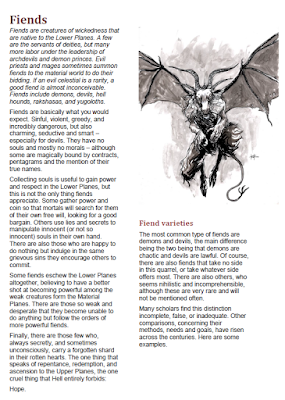 By the way, if you're one of the fine folks who I thanked in Dark Fantasy Basic, I'll be happy to send you a review copy once it gets finished.

Any feedback (and re-sharing, etc.) is greatly appreciated. These are collection of tables and short essays to inspire the creation of fantastic religions and places. The focus is on dark fantasy tropes: flawed heroes, terrible villains, corrupting magic, ominous ruins and damned wastelands.

They are mostly system-less, to be used with any game of your choice.

Here is one example of table you'll find in DFR. It answer the question "Where are your gods now?".

Which means you can get the whole collection for less than 6 dollars:

Future plans: I want to publish a few "Dark Fantasy Settings" soon, in a similar way. Then I'll publish my big monster book... I'm aiming for a BIG book, print+PDF, for every system - specially DFB and 5e!

If you like any of these ideas, let me know! We aim to please!
Postado por Eric Diaz às 7:51 AM 2 comments:

I've written about this before: here and here.

This is just a simplification, but I think I like it better than using tables. It is meant for 5e, but it was originally imagined for another system I'm writing (which is a simplification of 5e).

For the purposes of this post, we're using the expression "ability surplus" to mean ability-10.


We have two sample PCs to test this system.

Most weapons add 50% of ability surplus (Strength or Dexterity) to damage. This is practically identical to what 5e does.

Weapons that use both Strength and Dexterity may add a combined 60% (minimum 20% each).

Composite bows, for example, might add 30% of each to damage. Both Joe and Jane would get a +3 bonus:

Turn the nobs a bit here and there and you'll realize you have endless possibilities. For example:

- Two-handed weapons has a maximum of 70% instead of 60%. They usually add +10% Strength.
- Versatile weapons used with two hands may add 10% Dexterity instead (I'm thinking quarterstaves, spears...).
- Off-hand weapons add up to 40% instead of 50%, and must use at least 10% Dexterity.
- Thrown weapons always need more Strength, ranged weapons more Dexterity.
- Magic weapons may add some Intelligence, Charisma or Wisdom to the mix.
- etc. etc.

Here is something that can be even simpler. And more granular at the same time.

However, that assumes you're carrying nothing. If you are carrying 20% of your encumbrance limit*, you can only add 80% of your Dexterity surplus to AC.

(*your encumbrance limit depends on what rules you're using... slots, pounds, etc. But you can think of it this way: you have a number of slots equal to Str, and +1 to AC takes one slot. So, if you have Str 15, you could carry three pieces of armor [+3 AC] and still add 80% of you Dexterity surplus to AC, but only if you're carrying nothing else).

Here is where things get interesting. Joe, who is quicker, gets more benefits form travelling light. Jane, who is a lot stronger, would benefit more from armor, since it would be less encumbering.

Natural armor is probably exempt, and magic armor is lighter.

The system only "breaks" if you're very agile and very weak: armor will actually hinder your AC. But this already happens in 5e. And, well, sounds quite sensible.

Of course, you do not have to recalculate AC every time you pick up a new item... But when you do, players will quickly realize that encumbrance matters.

Here is another way to do it: use a table. This one, for example. So, if Jane has an "Strength B, Dexterity F" Greataxe, she adds +7 to damage.