This took me a lot longer than I expected, but here is my new version of "3d6 in order".

After you’re finished, add a +1 bonus to any ability of your choice for every time you rolled 15 or more.

Characters of the hopeless class [one of the five classes of my game, Dark Fantasy Basic] do not get this bonus, and instead must apply a -1 penalty to any ability (to a minimum of 8) every time they roll 14 or less on the d20.

I wanted a method which was:

- Faster.
- Fairer (i.e., starting PCs are more similar).
- More balanced (i.e, less extremes, no starting PCs with 18 Strength and 3 Constitution, for example)
- Allowed for SOME customization, but not too many options, to avoid analysis paralysis.
- Was slanted towards "archetypal" results, based on my yin-yang method.

Shall we try it?

The main issue with these examples is that they seem TOO WEAK when compared to the "new school" methods I'm used to in my 5e games... So I should probably add a couple of extra columns to the table... Something like basic/heroic/epic. It would LOOK good, I think, but just adding +1 or +2 to every stat (or every other stat) would be even easier. 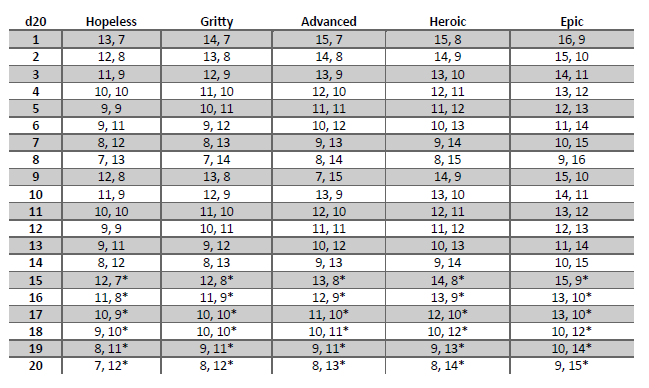 Feels like an awful lot of useless rolling - you could get 5 "nothing happens" results for every encounter, for example. When travelling in an otherwise empty road, the PCs will roll over and over again until they get an encounter.

Why not INVERTING it? 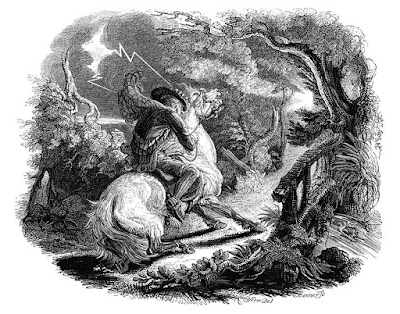 A roll of 1 might mean an immediate encounter, with a roll of 6 meaning "nothing happens", and you get to roll again next turn. Which would give you a very small chance of going, say, ten turns (or days, etc.) without any encounters.

Unless you WANT to roll again and again to add tension, etc., this method seems simpler, easier and more effective.

There are other small advantages. For example, if you WANT to have an encounter somewhere along the road, this method will guarantee you eventually get it, while avoiding many encounters in a row.

For example, you could use 1d6+1 (or, say, 2d4) for how many days you can travel into the dark woods without an encounter.

This would mean:
- You are relatively safer before getting too deep into the woods.
- You get a small respite after each encounter.

What do you think? Do you know any games that use such system? Do you see any other pros and cons? Let me know in the comments.
Postado por Eric Diaz às 4:45 PM 10 comments: