This is a small post about the history of "Basic D&D", plus some of its greatest versions (including B/X) and clones.

Basic D&D is a line of D&D products that started in 1977 and ended a bit before 2000. The first version (Holmes - see below) was meant as an introduction to D&D, but since 1981 (B/X - see below) it became a separate line of products, with its own rules, settings (most notably Blackmoor and Mystara/Known World), adventures, etc. I won't talk about these settings and adventures here; suffice to say, there were separate from the AD&D line.
From Wikipedia (emphasis mine):

After the release of the AD&D game, the Basic Set saw a major revision in 1981 by editor Tom Moldvay.[2] The game was not brought in line with AD&D but instead further away from that ruleset, and thus the basic D&D game became a separate and distinct product line from AD&D. The former was promoted as a continuation of the tone of original D&D, while AD&D was an advancement of the mechanics.

With the revision of the Basic Set, discrete rulesets for higher character levels were introduced as expansions for the basic game. The Moldvay Basic Set was immediately followed by the accompanying release of an Expert Set edited by Dave Cook with Steve Marsh that supported character levels four through fourteen, with the intent that players would continue with the Expert Set.

Basic D&D has some idiosyncrasies when compared to other editions of D&D, most notably "race as class": you can choose to be an elf OR a fighter, but not both. In addition, there are many small differences (different classes, races, spells, monsters, settings, deities, etc.) that can be considered boons or banes, depending on your taste. I think it is fair to say that both AD&D and BD&D have their own unique and awesome bits.
This graph from Wikipedia is accurate, but remember Holmes is still part of the "original edition" (the separate line starting with B/X). 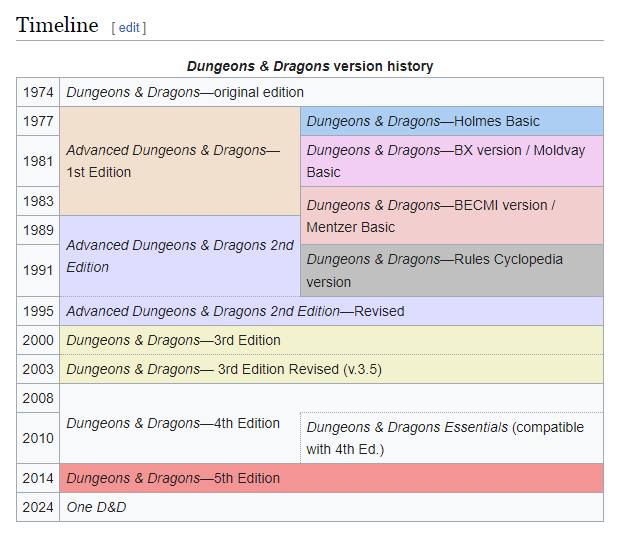 What is B/X, and why so popular?

B/X is an abbreviation of Basic/Expert D&D - the two books picture below, published in 1981. 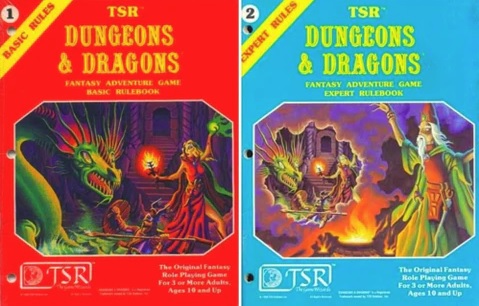 This edition is noteworthy because, for many people, it is the best/easiest iteration of D&D, ever.

Moldvay's Basic might the best D&D ever written, indeed. Only 64-pages, and contains answers to questions that have been discussed for ages - before and after this book. I've wrote multiple posts on the subject, calling it an oracle and a minimum viable D&D. Cook/Marsh's Expert completes the game with wilderness stuff, domain management, and more tools for adventuring.

Some of its qualities:

- Much simpler and leaner than AD&D or BECMI (see below).

- Clearer and better organized than the original D&D form 1974 and Holmes Basic.

- Streamlined ability scores, with bonuses going from -3 to +3 across every ability.

B/X is the basis of my current game, despite heavy house-ruling. I think it is a great game but not with its flaws (also, some idiosyncrasies that are not to everyone's liking - for example, dwarves and elves are classes). There are LOTS of room for improvement and even corrections to be made, IMO.

Still - probably the best, as explained in the links above.

Holmes' Basic (1977) was written as an introduction to D&D (the original 1974 game). While a good game in itself, it feels incomplete because of that (it has only three levels). It also has some quirks: it lacks some very popular innovations such as different weapon damage, while simultaneously having strange/broken rules such as a dagger attacking twice, for example.

BECMI (1983-1985) is a later revision that adds lots of stuff compared to B/X. BECMI stands for Basic, Expert, Companion, Master and Immortal - each a separate book, like B/X. They are also known as "Mentzer's Basic", "Mentzer's Expert", etc. It has a "tutorial" format, good for introducing beginners to the D&D rules. Many changes are positive (e.g., the cleric), and it has tons of cool options, but it eventually adds too much IMO, including adventuring beyond the 36th level.

The Rules Cyclopedia (1991) compiles most of the BECMI rules, and it might be the most complete D&D book ever, including 36 levels, immortals, monsters, and DM advice in a single book. Again, great for inspiration, but too much to use at once IMO.

The line ended a few years before 2000, when the "basic" and "advanced" versions were merged into a single game (D&D 3e). There were other products called "Basic D&D" after this time, but these were not usually meant as a distinct line of products,

All these products are more or less compatible, but B/X and its clones remain the most popular.

There has been several "clones" of B/X, and they are some of the most popular OSR products. These are the three most important ones (due to popularity, sales, and being very close to B/X). They all have free versions, both in PDF and online format (or both), linked below.

Labyrinth Lord (LL) - A version of B/X with very small changes (adds more levels to some classes, streamlines the cleric's weird spell progression and gives them spells on level 1). It was a pioneer in many aspects.

The main draw: Goblinoid Games was the first retro-clone publisher to both make most content open under the OGL and create a free trademark license [...]. The material contained in the LL rules is available to others with few restrictions, allowing fans and other publishers alike to create their own derivative material for use with the system.[2] (Wikipedia). OSE is a derivative of the LL text IIRC, and I considered using it for one of my own games - it is really good.

[notice that the OGL is going through a ruckus caused by WotC at the time of this post, so I wouldn't advise using it at this moment].

Basic Fantasy RPG (BFRPG) - Another early clone with small changes, mainly ascending armor class and separation of character race and class. Also streamlines the cleric in addition to the thief (skills always use percentages). Here is the free SRD.

The main draw: BFRPG has an open/free philosophy, encouraging people to participate and create their own stuff, which fosters an amazing community with lots of free tools, in addition to cheap physical books and good rules (the basic book has few but worthy innovations). Check it here.

Old-School Essentials (OSE) - This is a newer clone (c. 2019). It is a strict B/X clone - as close to B/X as possible. Doesn't fix, add or change almost anything, but makes the rules clearer, has a clean layout and wonderful presentation: indexed, organization, great art, etc. It is the best looking of the three IMO. Rules-wise, it lacks the additions/corrections of the other two. Here is the free SRD.

The main draw: The presentation, amazing looks and faithfulness to the original rules. The SRD is also amazing.

BFRPG has no advanced version "per se", but you can find rules for more classes, races etc., here.

Other "clones": LotFP, DCC and DFB

These are not exact clones, but clearly inspired by Basic D&D. The OSR clones are endless, but many are inspired by other editions of D&D instead of Basic (or no specific edition). Maybe one day I'll try to tackle at least a few dozen... but I chose three final "clones" for this post.

Lamentations of the Flame Princess (LotFP) - Famous for its gory, mature, bloody art, and some interesting adventures, but for me the rules are the best part: well organized, streamlined, and even somewhat rebalanced. Seems inspired by Mentzer's B/E. It strays a bit further from Basic than any of the ones mentioned above, but still roughly compatible. I find most of the changes (cleric, turn undead, 1d6 thief skills, etc.) very positive and preferable to the original rules and other clones. Free version here.

Dungeon Crawl Classics (DCC RPG) - this one is ALSO famous for its cool art (but funny/retro instead of gory) and great adventures. System-wise, it uses a 3.5e basis but turns it into an OSR game. It is barely a "B/X clone", renaming attributes, creating new mechanic's and using lots of random tables. I think it deserves mention due to its popularity, coolness, and keeping of some B/X idiosyncrasies (race-as-class, fewer levels, etc.). You can find it here (free quickstart here).

Dark Fantasy Basic (DFB) - My own clone! Instead of copying mechanics from B/X, I took Moldvay's Basic and rewrote it page by page, adding some stuff from 3e and 5e (also some DCC and Target 20 inspiration). I am still using it to this day, but with some revisions, since I published in 2017. It still roughly compatible with B/X and I use it with published adventures from other clones, but it has a few bits of its own. You can find it here (alas, no free version available yet; I'll probably make a free version of the next update - hopefully before the end of 2023, starting as soon as we've got this OGL thing sorted out... - but for now here is a discount coupon).

As said above, Basic D&D, in its many forms (including clones), is considered by many as the best version of D&D. If you haven't tried it, you're missing out!