Book Reviews II - The Eyes of the Overworld, by Jack Vance

As you probably know, Jack Vance, is among the "most immediate influences" mentioned by Gygax  in the AD&D DMG's Appendix N. The Eyes of the Overworld is also mentioned explicitly. Even without these mentions, Vance is obviously at the heart of D&D's origins - most famously for the "Vancian" magic system that sets D&D apart from most other RPGs.

While I did read this book because of its presence in the Appendix N, I was more interested in having a fun read than looking for clues about the origins of D&D. I found the references regardless of this - they are very obvious, and anyone trying to understand where some ideas from D&D came from should read this book. 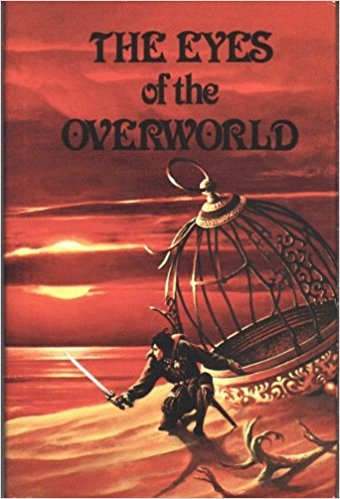 The Eyes of the Overworld tell a story of Cugel the Clever, a roguish anti-hero that must travel back home after being forcibly transported to distant, unknown lands by a rival magician.

The book is definitely well-written and full of ideas for any D&D game. The author is amazingly clever in both creativity and styles. Each chapter reads like an adventure, and Cugel always seem to find a clever, if often immoral, way through his problems.

Vance's style, it seems, must have been a huge influence on Gygax prose; it is certainly sesquipedalian, a word I learned form Appendix N reading...

And the book is definitely funny at times. It never takes itself too seriously - but is is not entirely comedy or satire as well. The Eyes of the Overworld, and its protagonist, Cugel, are firmly entrenched in the picaresque tradition. Cugel is arrogant, selfish, often smart but always unwise, and never seems to learn anything from his misadventures (at least in this book, and the ending might be a symbol of that) - but he is not quite the villain, since many of the characters in the story are equal or worse than him. There are not even hints of damnation, redemption, tragedy, etc. - Cugel is what he is and doesn't seem to care for changing.

BTW, he is also an interesting character in D&D terms - chaotic to the core and with abilities that would fit thieves, wizards and bards, he seems to be the prototypical "rogue", maybe even more than  the Gray Mouser.

His "character sheet" is interesting and worth quoting:

Cugel was a man of many capabilities, with a disposition at once flexible and pertinacious. He was long of leg, deft of hand, light of finger, soft of tongue. His hair was the blackest of black fur, growing low down his forehead, coving sharply back above his eyebrows. His darting eye, long inquisitive nose and droll mouth gave his somewhat lean and bony face an expression of vivacity, candor, and affability. He had known many vicissitudes, gaining therefrom a suppleness, a fine discretion, a mastery of both bravado and stealth.

If you're okay with that charachter, you will probably like the book.

For me, the despicable nature of Cugel, while amusing, prevented me from caring for his fate at times - nor did I hope for his downfall, since there was no one to root for and most of the world's population seemed unconcerned about the imminent destruction of the Dying Earth (I should note I haven't read The Dying Earth in its entirety, only a couple of short stories).

I don't mind the break from powerful heroes of the Appendix N such as Conan and Elric, and I certainly enjoy Fafhrd and the Gray Mouser with all their shortcomings, but Cugel at times seems to be too selfish and unwise even for an anti-hero. Jurgen, the picaresque hero from "Jurgen, A Comedy of Justice" might be a better comparison (and Jurgen was a bit funnier, although not as useful for D&D).

But the book, and even Cugel, certainly has its moments - some of them unexpected and amazing, such as the discussion about the origins of the universe (Cugel, as usual, doesn't seem to care).

In short, a great book, with funny moments and numerous ideas for your D&D adventures, but do not go in there looking for an heroic protagonist!

At first glance, it looks like there is a balance between Strong and Dexterous:

A) The first has better melee weapons, while the second has better ranged weapons.

B) The first can wear heavier armor that provides a slightly better AC (although you need to be proficient with heavy armor), while the second has decent AC without having to carry armor.

(Also, the first can carry more stuff without being encumbered - since Plate weights 65 pounds, the first fighter has still some extra encumbrance to spare - but if you're using "Variant: Encumbrance", the unarmored fighter can carry more stuff, since he doesn't need armor. Considering the don/doff times, price, stealth disadvantage, and other rules that punish the use of heavy armor, I will call that a draw).

C) The first is better at grappling, although both are equally good at avoiding or escaping a grapple. The second has better saves (Dexterity saves being more common then Strength), more skills, and better initiative.

Well, maybe not a perfect balance - it seems clear that Dexterity is a bit ahead - but good enough for me.

The problem is point "A" is not quite true.

So, Strong can use a Greatsword (2d6 damage) for extra damage. The extra damage is not that great but not bad either - about 20% if you disregard magic weapons, sneak attack, feats, etc. - a fair trade for +2 AC.

Fighting styles actually make it a bit worse. The Dueling fighting style will add +2 to damage, but the Great Weapon Fighting will add 1.33 (on average) to your greatsword. The difference between rapier and Greatsword damage has fallen below 15% - or less if consider magic weapons, sneak attack, smite, etc.

We will mention feats below, but, for now, it seems like a draw - with a slight advantage to Strong, since she gets more options.

For ranged weapons, there is no "rapier" equivalent. In fact, there are no ranged weapons that can be used with Strength, except for the dart (1d4 damage). Strength is basically useless if you're using a longbow or heavy crossbow (go figure...). The nearest equivalent are thrown weapons.

But thrown weapons are a poor substitute for ranged ones. Not only the damage is smaller - which would be okay, I guess, even though the rapier deals as much damage as the Longsword - but the range is significantly shorter - usually less than half.

The best thrown weapon - the javelin - also weights 2 pounds. Carrying a dozen javelins not only looks ridiculous but also might encumber your character (again, probably irrelevant if you're not using "Variant: Encumbrance"). Well, maybe they'll be intact after battle, unlike arrows.

But it gets worse.

First, feats. The most obvious comparison is between Sharpshooter and Great Weapon Master. Once more, Dexterous gets the edge: you can effectively shoot targets at 400-600 feet away, without disadvantage, even if they have cover. You also get to offset the -5 penalty with the Archery fighting style.

Even though some aspects of Sharpshooter can apply to thrown weapons (apparently), there is no good fighting style or feat for thrown weapons (other than darts) - unlike rapier + shield.

Except one: the horrible Dual Wielder feat, which says:

Unfortunately,  this explicitly means, as confirmed by Jeremy Crawford:

On your turn, you can interact with one object for free, either during your move or during an action (PH, 190). One of the most common object interactions is drawing or stowing a weapon. Interacting with a second object on the same turn requires an action. You need a feature like the Dual Wielder feat to draw or stow a second weapon for free.
Which means... if you have two or more attacks, thrown weapons become near useless!

But it was necessary to make sense of my next couple of "D&D 5e weapons" post: why do we need better thrown weapons, and better ranged weapons for Strength based fighters.
Postado por Eric Diaz às 7:01 PM 6 comments: