So, apparently D&D's next book is Ghosts of Saltmarsh. The name is from the classic module The Sinister Secret of Saltmarsh, which is contained in the book in some shape or form. 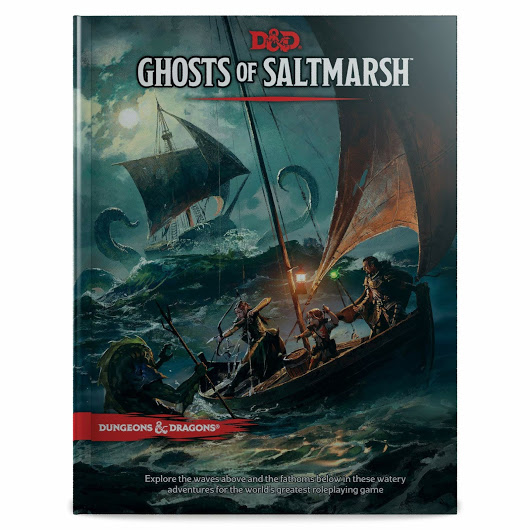 When I described my four favorite meta-settings, I ended the post with " I always wanted to play a nautical campaign, going from one exotic island to another, but never managed to do it. [...]"

I really like the idea of nautical adventures, "The Seven Voyages of Sindbad" style. There are several reasons for that (other than the fact that I've loved to read the stories as a kid...).

First, you can go through old classics and new stuff, things like Isle of the Unknown, Isle of the Ape, Hot Springs Island and Tomb of Annihilation, just to mention a few. Qelong also fits, since you start from a boat IIRC, and might be a chance to use Freeport and some pirate stuff (out of Fighting Fantasy, for example).

You can insert something that would fit the bermuda triangle or Lost, or maybe even Earthsea. Plenty of good, epic stuff to mine from greek classics. Also At the Mountains of Madness (and all of the old gods and fish-people trapped under the sea), Dr. Moreau, King Kong... The possibilities are endless.

The idea of "strange lands beyond the sea" is more believable and exciting for me than that "Yawning Portal" stuff.

There is some continuity in the crew - and also a possibly of replacing characters. But there is also the constant discovery of new lands.

You can destroy an island without destroying the entire world, which seems cool. You can lose or retire half of your crew and go back for replacements. You can even leave some people healing during a certain expedition, only to go back into adventure in the next one.

Anyway, a great idea from WotC.

Some time ago, I wrote about "social rolls":

I have little interest in this discussion because I am convinced that the truth lies in the middle. In fact, I am half-convinced that MOST OF US agree the truth lies in the middle. The problem is that we are discussing IN THE ABSTRACT. But discussing how it goes IN PRACTICE is easier and more useful.
[...] In short: when most possibilites of role-playing have been exhausted, and the result of the interaction isn't obvious, then you roll the dice.

I think the same idea can be used to find and disarm traps, solve riddles, and even in combat in some circumstances (PC: "I cut the prisoner's throat! My attack bonus is..."; GM "No need to roll, the prisoner dies").

In short, there is nothing really unique to "social skills" in this regard. You describe what you want to do and, if the outcome is uncertain, you roll. Had a clever idea? Maybe the outcome is now certain. Maybe you roll with advantage. Etc.

So, what about perception? Should you roll to find hidden things, or carefully describe WHERE you're looking and HOW you're doing it?

Again, this is a matter of degree, not black and white. There is BOTH "player skill" AND "character skill".

Let us try one example.

There are six statues in a room with painting, furniture, etc. One of the statues (a mermaid) has a single (and valuable) emerald eye, but this is somewhat concealed by darkness, painting, etc.

Being extreme either way will lead to situations commonly described as "roll-playing" or, conversely, "pixel-bitching".

For example, if you enter the room and say "I roll to find treasure", this is classical roll-playing: you are not interacting with the contents of the room, just with the mechanics of the system. This will simply not fly in my games*.

However, if a player is suspicious of the mermaid statue's eyes (or just the face) and specifically examines it, asking "which eye" is typical pixel-bitching. Unless the PCs are pressed for time, examining one statue's face would be enough to notice anything out of the ordinary.

1. In a dungeon with 30-ish rooms, one PC searched for secret doors on the floor of the ONE ROOM that had a secret door on the floor. Automatic success.
2. Playing Curse of Strahd, one PC tested a suit of armor to see if it would animate. It didn't. A few rooms later, there was another suit of armor. Nobody tested it. No perception check - the PCs were unaware when it attacked. BTW, CoS is an awesome campaign, full of clever twist like this.
3. Upon seeing a large library, a player asks if there is something worth taking. Perception check to find a useful book (or Insight, etc.).

Once again, the truth lies in the middle... as if often does.

* There are games in which this type of thing is common.

For example, one of my favorite "modern" games, Dungeon World, has a discern realities move that comes to mind (check the link). However, even in Dungeon World you're not supposed to do straight roll-playing: "You can’t just stick your head in the doorway and discern realities about a room. You’re not merely scanning for clues—you have to look under and around things, tap the walls, and check for weird dust patterns on the bookshelves. That sort of thing."

However, the example in the SRD contains a PC finding "newer" and "bent" parts in the wall without any direct reference to his or her actions (namely, "I take out my tools and start messing with stuff. I pull candlesticks and tap the walls with my hammer.").

And DW has certainly many bits that indicate this type of "roll-playing". Including, for example, the possibility that you can find a trap/monster/trouble in an empty room if your roll is bad enough - even if it wasn't there before you roll. But not all GMs use such methods.

In any case, since this isn't black and white, you could certainly play DW in any way you prefer.
Postado por Eric Diaz às 10:58 AM 2 comments:

Look at this beautiful thing (source): 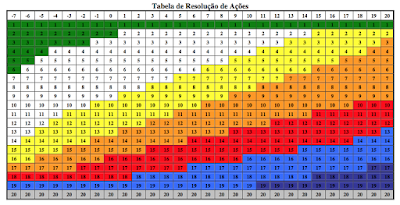 It is an "universal" table (used for skills, combat, etc.) from the Brazilian RPG Tagmar (supposedly based on Star Frontiers, not FASERIP).

But in combat, it really shines. You basically compare your opponents defense (and armor, I think) to your attack and check the corresponding column. Weapon damage s fixed, and each color corresponds to a fraction of total damage: 25%, 50%, 75%, 100% and 125%.

Here is another rendition (from another edition, I think):

So, even tough you have to look at a table, you save one roll (you do not roll for damage) and you don't even need math (damage is written in your sheet, something like "Sword +15 damage 3/6/9/12").

A natural 20 (grey) is always a crit and makes you roll again in the same table. Although the average damage is not necessarily that great, rolling 20 again means gruesome death (beheading, impaling, etc., depending on the weapon).

This looks very cool IMO. It would be nice to make a D&D version at some point.

But I like the idea of having attack and damage in a single roll, and even having a big, fixed number for combat (say, you deal 32 damage with your axe), but seldom using your weapon's full potential.

It would be a great way of differentiating weapons and making them more unique without being too fiddly.

* You are proficient in all weapons and armor.

* Special weapons allow you to add BOTH your Strength and Dex modifiers, or double your Str modifier, but the same limits may still apply.

* The maximum amount of AC bonus you can get from armor is equal to half your Strength. Strength 16 means you can get a +8 bonus (AC 18).

* Shield does not affect AC.

* If you get hit, you can dodge or block. To dodge, roll 1d20+Dex. To block, 1d20+AC bonus+shield bonus. Dodging avoids damage, blocking merely reduces it (maybe to one quarter damage?). 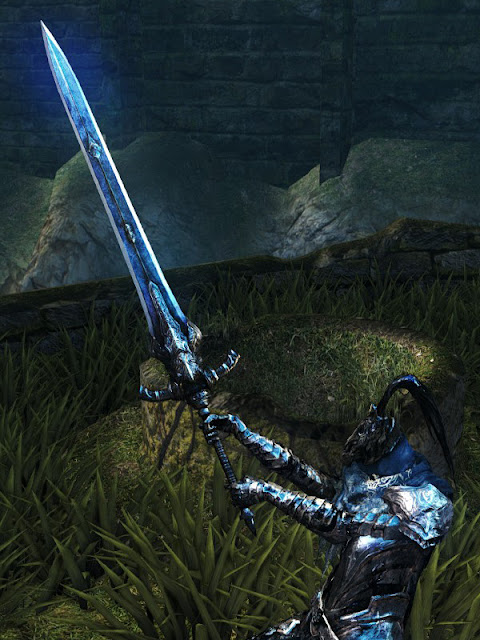 A "Dark Souls" style system where you find new weapons and discover new fighting styles as you progress and make choices. Also, I hate the idea of "you are a wizards therefore you cannot use a sword".
Postado por Eric Diaz às 6:53 AM 4 comments: