Here is a bit adapted from Dark Fantasy Magic:

The idea of “spells as living entities” is worth considering. My main inspiration here are the works of Jack Vance. Terry Pratchett uses it very effectively for comic effect. Our goal, however, is somewhat different from these authors, as we are trying to make magic a bit darker and scarier.

This idea can explain various parts of a spell system. For example, spells mishaps are just strong spells that the wizard was unable to control for a moment. Spells occupy a place in the wizard’s mind. They can reproduce and be extinguished, like viruses or bacteria, and they can make the wizard sick in the brain. They can lie dormant in old grimoires and scrolls, or be trapped in talismans and wands. They can mutate with time, or generate funny interactions with one another. Magic items lose power after all spells store within are spent – leaving a single spell unused might prevent this in some cases, probably because some spells can reproduce by parthenogenesis.

These things would ordinarily inhabit another planet, parallel to our own, where they roam free, only to be randomly picked by random wizards to fuel their actions. The most powerful ones could even take a physical form if they wish. Every wizard should have some grasp of this concept, even if only in a subconscious manner.

What kind of beings are spells, exactly? Well, that is up to you. They might be spirits, demons, angels, elementals, or beings of pure energy. Their minds are probably extremely simple or completely alien. They might be servants or parts of powerful beings (the god of fire, etc.). One would assume they do not mind being used by wizards, perhaps because they follow a higher order, or do not grasp the concept enough to organize a rebellion. They probably do not enjoy staying for too long in our plane, since most magic is temporary.

The truth, however, could be darker than the characters know.

Maybe these beings can feel, and consider every casting a small torture, and repeated summoning a form of slavery. The screaming faces that appear every time you hurl an energy spell at your enemies are more than illusions. Magic artifacts may require the binding of a sentient spirit in a piece of metal or wood. Like trapping fireflies to make a lantern… or imprisoning Beethoven in a music box for your own amusement.

The demon that lives in your sword is always willing to help you in your fights in exchange for some blood… but for how long? Maybe all wizards know this and keep it secret, or maybe they refuse to see it. Maybe it is only a theory, a legend, a hunch… an uneasy feeling in the back of their heads.

And maybe one day the wizards might find that these things want revenge.

As I've said above, this is adapted from my book Dark Fantasy Magic. It contains shorts essays and many tables that deal with magic, wizards, spells, etc.

You can find it by clicking on the link above.

It is also a great way to support this blog.
Hope you enjoy it! Thanks!
Postado por Eric Diaz às 9:23 AM 7 comments: 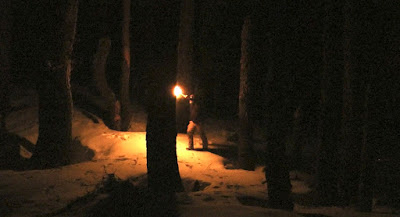 ---
If you want to support this blog, check out my books! Most are compatible with 5e.
Postado por Eric Diaz às 12:01 PM 4 comments: 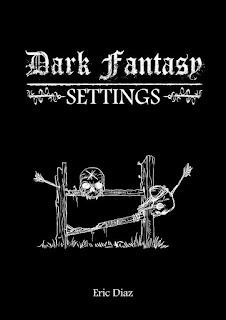 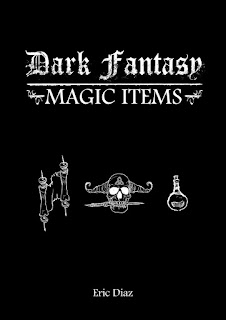 These are collection of tables and short essays to inspire the creation of dark fantasy settings and magic items. As always, the focus is on dark fantasy tropes: flawed heroes, terrible villains, corrupting magic, ominous ruins and damned wastelands.

Here are some examples from each book.


I think the series is now complete! I'm really happy on how things turned out. And I still have other stuff up my sleeve...  Stay tuned!
Postado por Eric Diaz às 8:06 AM 2 comments:

Sword of destiny is the second book from "the Witcher" series, which rose to worldwide fame mostly because of the videogames and, now, the TV series.

This book was actually published in Poland BEFORE The Last Wish, the "first" book in the series. However, the events described in The Last Wish happened before, and it also was printed before in english IIRC, so Sword of destiny is usually classified as book 2 in the series.

These two books are collections of interconnected short stories, not novels, with the main "saga" beginning in book three. 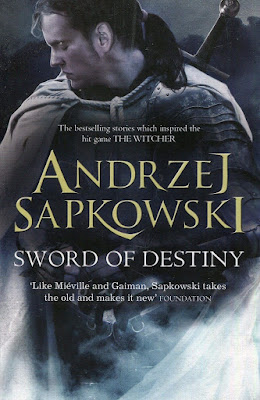 If you read my review from the first book, or watched the TV series, there is not much to add here. If you liked those, you will probably like this. The series drew a lot from this book.

Sword of destiny is like The Last Wish, but even more so: the flaws are more glaring, but the overall quality of te writing is not much different from the "first" book. Dark humor, clever twists, decent dialogue, etc.

There are LOTS of appearances from Jaskier and Yennefer in this book, among other fortuitous encounters that strained my credulity to its limits. Important characters bump into each other at crossroads, random villages, etc. "Destiny" seems to be the culprit in some cases, but it feels exaggerated sometimes.

The focus on relationships frankly makes me question why we should call this "dark fantasy" in the first place. Yes, there are some amoral characters and prejudice against the nearly-extinct elves, and institutions are unreliable (aren't they always?), but not much more "dark stuff" than that. Lots of happy endings (or at least not terrible), for example, unlike G.R.R. Martin or Moorcock. The dark parts in this book concern mostly Geralt himself and how the process of becoming a Witcher is dangerous and taxing.

And Geralt is again, an idealistic character, seemingly out of place in this world - much more honest and reliable than Elric or Conan, and deeply in love with Yennefer, a woman that apparently isn't sure if she loves him back. Or something like that. If you came looking for gritty, gloomy fantasy, you might roll eyes at some points in the story.

The focus on love and relationships (even impossible love) makes this stuff almost like some kind of "romantic" fantasy (I use quotation marks because romantic fantasy is actually a whole different genre).

But, ultimately, it is mostly "postmodern" fantasy, poking at the tropes of the "traditional" fantasy of Tolkien and others and often subverting them, reflecting on society itself and the nature of destiny, etc.

It is not tragic or alien stuff, but has clear modern sensibilities (even the characters often think in modern terms...). It resembles the "pulp" classics like Howard more than the epic narratives of Tolkien or Moorcock, or even the more "magical" works of Dunsany (which I love) and Eddison (which I can hardly read, to be honest).

At least in these first two books, there is a quality of alienness and awe that seems lacking - if that is what you're looking for in fantasy novels.

However, the stories are interesting and well-written enough that, frankly, got me hooked. The pace is sometimes slow, but never boring, and the "short story" structure make pages go by fast. The action scenes are good, the jokes are often funny... And the characters manage to be compelling - Jaskier is a worthy companion instead of comic relief, and Geralt pass through hard times and mundane problems, making him more relatable.

And, once again, this book is great to mine for ideas for RPGs.

So, in short... I'm a bit on the fence on this one. It is a good book, but not one of the greats, at least not so far. But then again it is the first book the author wrote, and it show signs of becoming something bigger. So, if you like the "first" book or the show, I'd recommend this one. I'll probably read the next one to see how the series progresses.
Postado por Eric Diaz às 4:57 PM 2 comments: