There is an entire post to be written about how wasteful is to use a die with 20 sides to only get two or three meanings (hit, miss, or critical hit)... but I'm not writing that today.

Today is just one example.

So, here is Set (or Seth), an Egyptian god of many roles... some of them related to chaos or defeating chaos. Which is fitting.

If a player character becomes a follower of Set, roll a d20. This is now the number of Seth.

Say you've got a 12. Every time you roll a 12 with that PC, Set intervenes. He has his own goals in mid... but if you have been a faithful follower, he is very much inclined to help you out. Of course, he has his own, sometimes inscrutable, motives.

Extrapolate from this little mechanic. The possibilites are endless. For example:

- For clerics, the usefulness is obvious. Yes, you can sin against Set from time to time... but better not roll his number while doing it!
- The DM rolls in secret, and tells the PC when Set intervenes. Maybe he only does it once until you've got the time to pray again. But did Set really intervene? Or would that 12 have killed the monster anyway?
- You could form a pact with a deity, and use this help until you fulfill it.
- Maybe you can worship two deities? Well, roll a new die. Now you have two lucky nubmers! But whose goals are you following now? And you better not roll the same number twice - you soul might get ripped apart by jealous deities...
- Of course, it works differently for non-clerics. Maybe once a day, etc.

Here is a cool monster (by Jeremy Hart)

Here is a cool monster that Jeremy Hart shared on Facebook: 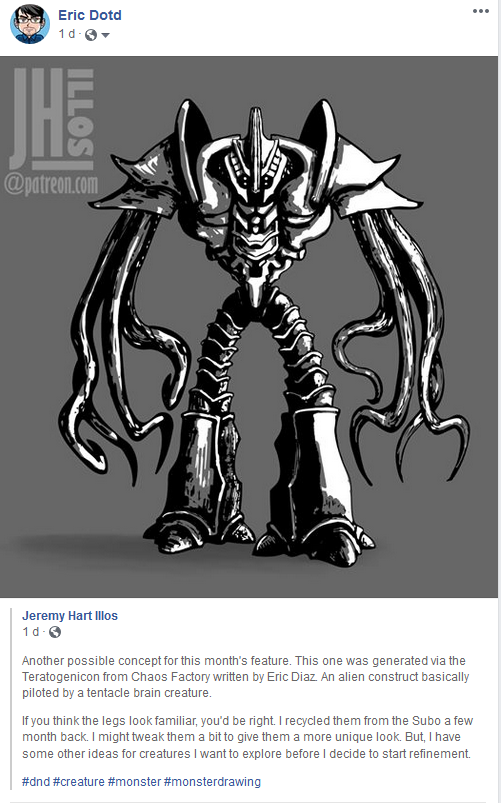 There are few things more rewarding than seeing that, somehow, I helped inspire something awesome. Maybe that's why I write so many random tables!

But anyway... He inspired me first! I've known Jeremy's work before publishing the Teratogenicon. I picked some of his (amazing) monster stock art to use in The Wretched Hive:


You can find more of Jeremy's stuff on DTRPG*.

And mine, of course!

This exchange of ideas and inspiration is the reason I write this blog.

So, thanks Jeremy and everyone who comments here telling me how they are using something they've found in this blog in their own games or projects!

If you used any of my stuff - adventures, generators, ideas - always feel free to let me know! I really enjoy this stuff!

* By purchasing stuff through affiliate links you're helping to support this blog.
Postado por Eric Diaz às 8:43 AM No comments: