Aberrations are utterly alien beings. Many of them have innate magical abilities drawn from the creature’s alien mind rather than the mystical forces of the world. [from the SRD]


Aberrations are the strangest and most variable type of monster. A giant with two heads or blue skin is still a giant; a giant with a head on its stomach, a serpent for a tongue and half a dozen slimy tentacles where the legs should be is probably an aberration.
Some aberrations are very intelligent while others are dumber than farm animals, but most of them are utterly unpredictable. Their alien, deranged minds are capable of feats unknown to most of humankind – innate magic, telepathy, baffling schemes and calculations – but can also make them erratic and self-destructive. Few aberrations have humanlike capacities – most are either incredibly gifted or incredibly stupid, although some appear to be both.

Aberrations are alien enough to defy comprehension. They are mostly inscrutable, although many behave like common predators, killing for food and sport. Most aberrations need food and water to survive, although some seem to subside on psychic energies, ether, or other mystical energies. They often live in forgotten dungeons, temples and caves, away from human eyes, since none in their right mind would suffer them to exist. 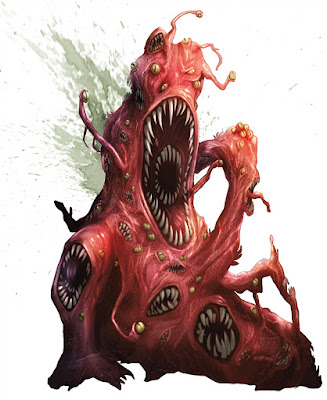 A typical aberration has the following traits:
Size: any.
Alignment: Chaotic Evil.
Abilities: good Strength, Constitution; bad Charisma, Intelligence.
Senses: darkvision 60 ft.
Languages: Few aberrations can comprehend languages and even fewer can speak. If they do, it is likely Deep Speech, Common, or Undercommon.
Challenge: 2d6.
Attacks: upper limbs (see below) and others.
Appearance. The first five tables describe an aberration’s appearance – skin, upper and lower limbs, body and special features. There is no entry for heads – the head, if any, will be appropriate to the body most of the times (amoebas will rarely have heads, octopuses have heads and no bodies, etc.). However, you can roll twice on the body table to produce a different head.
A monster with no upper limbs must attack with the lower limbs or other body parts (bite, slam, etc.). A monster with no lower limbs may use pseudopods, some form levitation, move with the upper limbs, or just roll around. 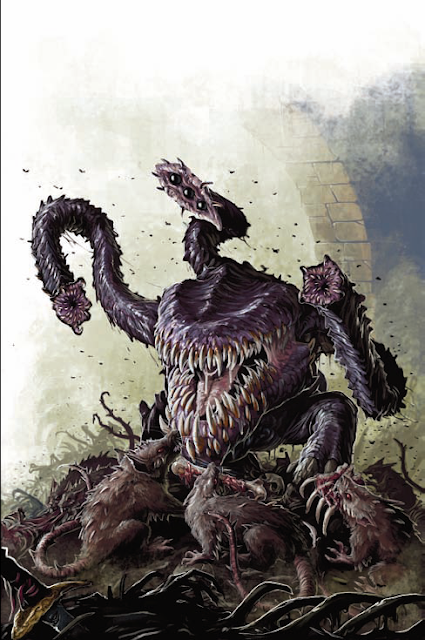 2. Telepathy: The monster can magically transmit simple messages and images to any creature within 120 feet of it that can understand a language, and detect the overall intentions of their foes from the same distance.

3. False Appearance: While the monster remains motionless, it is indistinguishable from a common object, animal or terrain feature (rug, tree, cow, humanoid in robes, stalagmite, bundle of ropes, etc.).

4. Teleporting: As an action, the monster can teleport, along with any equipment it is wearing or carrying, up to 120 feet to an unoccupied space it can see.

5. Aberrant Ground: The ground in a 10-foot radius around the monster is difficult terrain (doughlike, frozen, slippery, filled with tentacles, etc.). Each creature that starts its turn in that area must succeed on a Strength saving throw or have its speed reduced to 0 until the start of its next turn.

7. Carapace: the monster has a thick carapace that adds +2 bonus to AC and all Dexterity saving throws.

8. Fog: the monster is constantly surrounded by a thick fog (or illusion, cloud of darkness, etc.) that makes it invisible to all creatures that are not within 15 feet of the monster.

9. Four-dimensional: the monster lives in four dimensions and occasionally shifts out of existence. As a bonus action, the monster can roll 1d4. On a 1 or 2, nothing happens. On a 3, it shifts partially out of the three known dimensions, becoming heavily obscured. On 4, it enters a fourth dimension, where it is still visible yet it cannot affect or be affected by anything on the material plane. The effects last until the beginning of its next turn.

10. Shapechanger: The monster can use its action to polymorph into a Small or Medium humanoid it has eaten in the past, or back into its true form. Its statistics, other than its size, are the same in each form. Any equipment it is wearing or carrying isn’t transformed. It reverts to its true form if it dies.

11. Engulf: As an action, the monster engulfs a Medium or smaller creature Grappled by it. The engulfed target is Blinded, Restrained, and unable to breathe, and it must succeed on a Constitution saving throw at the start of each of the monster’s turns or take (2xCR) bludgeoning damage. If the monster moves, the engulfed target moves with it. The monster can have only one creature engulfed at a time.

12. Drain: As an action, the monster deals (CRx1) damage to a creature, and regains hit points equal to the damage the creature takes. The target must be grappled (blood drain) or charmed (psychic drain) by the monster.

13. Alien Mind: The monster is immune to scrying and to any effect that would sense its emotions, read its thoughts, or detect its location. In addition, if a creature attempts to do any of these things it must succeed on a Wisdom saving throw or take (CRx1) psychic damage and suffer the Stunned condition for one round.

14. Replicating: The monster is usually accompanied by 2d4 smaller versions of it, with lower CRs. The sum of their CRs cannot exceed the monster’s CR.

15. Horrific Appearance: Any humanoid that starts its turn within 30 feet of the monster and can see it must make a Wisdom saving throw. On a failed save, the creature is Frightened for 1 minute. A creature can repeat the saving throw at the end of each of its turns, with disadvantage if the monster is within line of sight, ending the effect on itself on a success. If a creature’s saving throw is successful or the effect ends for it, the creature is immune to the monster’s Horrific Appearance for the next 24 hours. Unless the target is surprised, the target can avert its eyes and avoid making the initial saving throw. Until the start of its next turn, a creature that averts its eyes has disadvantage on attack rolls against the monster.

16. Magic Resistance: The monster has advantage on saving throws against spells and other magical effects.

18. Gibbering: The monster babbles incoherently while it can see any creature and isn't Incapacitated. Each creature that starts its turn within 20 feet of the monster and can hear the gibbering must succeed on a Wisdom saving throw. On a failure, the creature can't take reactions until the start of its next turn and rolls a d8 to determine what it does during its turn. On a 1 to 4, the creature does nothing. On a 5 or 6, the creature takes no action or Bonus Action and uses all its Movement to move in a randomly determined direction. On a 7 or 8, the creature makes a melee Attack against a randomly determined creature within its reach or does nothing if it can't make such an Attack.

19. Telekinetic field: While the monster is conscious, it has advantage in Strength and Dexterity saving throws. Melee attacks against the monster have disadvantage, and ranged attacks miss automatically.

20. Roll twice
Do you like this? Want to see a Dark Fantasy Basic or Old school version of it? Want to see some undead or oozes? Let me know in the comments!
Postado por Eric Diaz às 10:44 AM No comments: