You know this blog is mostly about D&D stuff. Nowadays, I play only D&D or my own games (like Dark Fantasy Basic), but these are also inspired by D&D.

But I have been playing RPGs for a long time... Pendragon, GURPS, CoC, Savage Worlds, DC Heroes, Rolemaster... and I still enjoying reading this stuff from time to time.

My latest read was Mythras [affiliate link*]. Which is basically Runequest 6 after the publisher lost the rights to Runequest.

Runequest is a classic, but I have never played 6th edition myself (not sure if I played any of it at all, TBH). It is all very similar to Chaosium stuff: about seven attributes/abilities and d100 skills, basically.

Mythras is a detailed game, with lots of spells (like D&D) and LOTS of tools to give your character a background: tribe, family, civilization, relationships, passions, etc. It is a perfect game if you're trying to build an intricate backstory that really matters, with mechanical consequences.

I'm not into elaborate backgrounds myself at the moment, but since I write so much about weapons and armor in this blog, I thought I'd share this: the combat system in Mythras looks awesome. 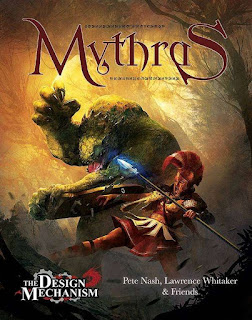 Combat in Mythras is detailed and granular like everything else, but I actually LIKE some detail in combat... And Mythras deals with complexity exactly the way I like, which means: combat is pretty simple most of the time, but when you get a "critical hit" each weapon brings unique tools to the game, making the differences really shine.

There are many other interesting details in combat... opposed rolls where you actually have a reason to use one of your actions to defend, for example. Different HP for each part of the body. Or a list with seven or eight shields instead of a single one.

By the way, many characters can take three actions per "turn"... Which is somewhat similar to D&D 5e or Pathfinder 2.

It is still too complex for my tastes but... For a combat oriented-oriented game, I think Mythras would be a great choice.

To be honest, I'm somewhat tempted to run this, or at least some simpler version.

Well, this isn't a review "per se", but my impressions of Mythras are basically that.

What Mythras lacks is an extensive or interesting bestiary; fantasy races and magic items; superhuman heroes; and shortcuts to make combat an character creation easier. It also has no setting; it is a "generic" fantasy game, but a "bronze age" setting is somewhat implied.

Maybe Classic Fantasy [affiliate link*] has some of that, but since it requires Mythras to play I'm betting it doesn't get any simpler.

In any case, I enjoyed reading Mythras, even if I don't play it. You will probably see me borrowing some ideas for my D&D games soon...

* Affiliate links - by using this, you're helping to support this blog!


Thank you all for your audience and support!
Postado por Eric Diaz às 1:51 PM