The WEIGHT of GOLD - is OD&D right again?

How much does a gold coin weight?

The answer is not as simple as you think. Here is my favorite post on the subject. Delta's thinking and research are awesome, and have influenced many old school RPGs, including mine. Ii convinced me of using silver coins instead of gold... and also use a reasonable weight to coins, like D&D did from 2e on - now there are 50 coins for every pound, instead of the original 10 coins. (BTW, I use a 1 gp = 10 sp = 100 cp, for simplicity).

He makes a great point. Here is one interesting bit:

Some of the lessons here, I think, are these: You don't want to "blow your wad" with enormous summer-action-movie-size treasures right at 1st level. A fat purse with a few dozen coins should be worth a thief's time to knife someone over. A wizard should be able to carry enough money in the folds of his robe to buy a night's stay at an inn, hire a lantern-bearer, or procure some interesting ephemera. If you want to jump into "heroic" adventure from the get-go, then it should match the rest of the D&D mechanics in that 3rd or 4th level is where you would start.

This is not only practical but also historically realistic.

However, there are other things to consider.

I've been thinking about item cards lately; I've even bought some. I want to make these things tangible to my players; not just things they can fill in a form. Maybe in this regard, I want my games to LOOK like games instead of accounting exercises. I even thought of buying some fake gold coins... but then it would starting looking like cosplay.

Now, there is something about those weighty, "low value! gold coins that makes them more... tangible.

In Moldvay basic, for example, 400 coins is the most you can carry before being affected (that is, if you're carrying nothing else... like weapons, armor or rations). It's the price of 40 swords (a normal sword weights as much as 60 coins). These coins are BIG!

In Moldvay (etc.), however, carrying a fortune hinders your movement. It is not always worth it. Getting greedy will kill you. Find a big hoard of coins, and you might be forced to return another day for the rest of the money, or risk being unable to run while being chased by stronger enemies!

In short, carrying coins becomes a meaningful decision, not an exercise in accounting. This might be one of the reasons why keeping track of money is unpopular nowadays. Feels like nitpicking.

There is also the mythical aspect of dragons sitting in huge piles of gold... There is no way any economy can be saved from total destruction if the adventures find one of these! If my memories of "1001 nights" are correct, piles of gold were used to buy castles... not entire continents!

See this excerpt, for example (source):

We are the better way to a billion coins being sequestered in a dragon’s hoard, which is more than 5,400 imperial tons of precious metal, including over 1,000 tons of gold. For reference, GFMS (the foremost consultancy and research company for the global precious metals market) estimates that the total amount of gold that humanity had extracted up until 1492 CE was about 12,780 tonnes (12,580 imperial tons). In other words, the dragon would have laid claim to a significant portion of global gold reserves on Earth, and probably would in your world, as well. 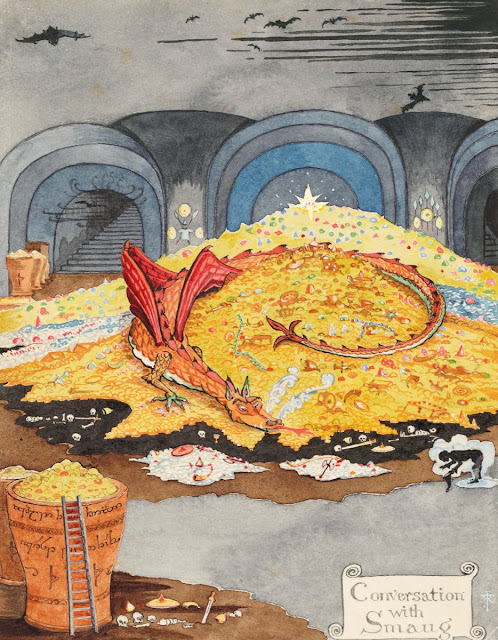 Of course, you could go the other way and make gold valuable to add some drama to that bag of gold. Each single gold piece could be impressive in itself - throwing gold around is for kings, not adventurers. This is the best way to use the "silver standard" proposed by Delta, IMO: gold is valuable, but not easy to find. There is absolutely no guarantee the players will find anyone with enough gold in the next town to buy 900 silver from them! Better find a bank or start digging a hole to protect your money...

Gold becomes more mythical than dragons, and dragons lay in piles of cooper and silver, etc.

Conversely, if you use gold instead of silver, finding some electrum piece could be a novel experience for the characters...The 5e SRD says that:

As for using tokens... I obviously don't want to play around with thousands of fake coins in my table. 50 coins representing one encumbrance slot feels just right for me. If all players use the same pool, I could use less than 100 coin tokes and a few treasure cards to represent all their money, including gold, silver, cooper and platinum (I fail to see the usefulness of electrum...). Ha, I could even buy some chocolate coins to allow players to eat while they spend...

Anyway, both systems have their merits and the choice is not the easiest one.

However, I can't help but feel that making OD&D better is a lot harder than it looks. There are just so many things that seem wrong, but have excellent reasons to be that way once you consider all the implications.