Regardless of what people might say, this is how most RPGs work - and that DEFINITELY includes "old school" RPGs.

It's pretty obvious when you think of it, but I've heard the contrary repeated so many times that I think it is worth addressing. In fact, I think this is so obvious that a few people will find it hard to see - like a fish trying to discern water, to use a common metaphor.

A few points that might make things even clearer:

* Most of the process of playing RPGs is made through conversation, with a fair amount of common sense. This does not require using rules, so there is no conflict.
* If the rule comes into play, they trump common sense. You'll choose the rules over common sense almost all of the time; if the rule becomes too absurd, you either make an exception or create a new rule. You do not use common sense to overcome the rules often. If you do, the rules are either bad or a bad fit for your group.
* Of course, the rules must be used WITH common sense. Most of the time, you'll use BOTH. It is also good if the rules are BASED on common sense, but they might also be mostly abstract. Does a sword to the gut kill you? Well, it depends on your HP.
* You also use common sense when there is NO clear rule.
* Frequent use of common sense to replace the rules may lead to GM tyranny, but may also lead to greater freedom for the players - it all depends on the specific examples (see below). This doesn't change the point I'm making. 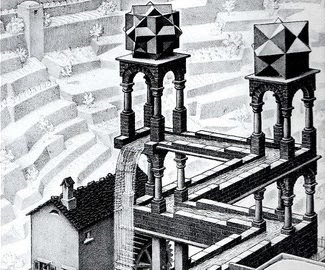 Let me give you some examples.

Combat: How many attacks can a fighter make with a sword or dagger in six seconds? What about a dagger? Can you shoot a crossbow four times in six seconds? Is a short-bow any faster? The answer is found in the rules, despite what common sense or real life might indicate.

Weapons and armor: do you benefit form using a helmet or from taking it off? Can you use padding under plate to improve your AC? Can you attack twice in the same round by using a rapier in one hand and a dagger in the other? This is determined by the rules.

Movement: How many feet can you move in a second? How many miles can you travel in a day? Look at the rules. The answer is only 42 if the rules say it is.

Falling and other hazards: can you survive a 200 feet fall? Three days or 30 days without food? Check the book.

Encumbrance: can you carry 150 pounds without ill effects, or 50 pounds are enough to slow you down? Depends on the rules you're using.

Conflicts: how often can the Str 13 paladin beat the Str 14 demon when arm wrestling? What about the Str 8 wizard? And what if each of them is attempting to perform a similar feat of strength? Jus do whatever the rules tell you to do.

I think that's enough to make a point. Let us discuss a few related issues.

Ignoring the rules in favor of perceived "common sense" may make the PCs feel powerless and frustrated.

If the GM decides to change the rules, we should do it in advance, with player's consent, or both.

On the other hand, the GM is free to ignore rules in order to allow PCs to do things the books forbid. For example, you may want to treat a rapier as a light weapon when holding a dagger in the other hand in 5e, or allow an elf with a Charisma bonus, instead of Intelligence. But it doesn't hurt to do so in advance, to, to allow all PCs to benefit.

These changes to the rules are usually made with balance, not only common sense, in mind. Can the wizard use Wisdom instead of Intelligence to cast spells? Probably not.

If you follow this blog, you may have noticed that I allow wizards to use swords too. Common sense says this is obvious - but, again, the rules trump common sense, so your wizard can only use a sword if the GM allows.

There are extreme cases in which the rules will be so absurd that they should obviously be disregard - for example you shouldn't be able to break a wall with a whip in most circumstances, but you might do it with a pick, no matter if they both deal 1d6 damage (for example).

This is a small minority of the cases. Most of the time, they both deal 1d6 damage and that's that.

There are also rules meant to fill any gaps in other rules - Moldvay's "there is always a chance" comes to mind.

Of course, intentional misuse of the rules are the fault of the users, not the rules!

To roll or not to roll (shades of gray)

Sometimes, it isn't clear if you should use the rules or common sense. I've wrote a post on that a while ago. But, basically. it's not black and white.

Me too! That is why I write lots of house rules which, in my opinion, make more sense than the ones used in the game. Still, these are rules. They are BASED on common sense, but they are not common sense, they are rules.

In any case, I'd be curious to hear from you if you think common sense trumps rules (except for extreme cases).
Postado por Eric Diaz às 2:21 PM