The scary thing about dragons

Player characters in D&D aren't ordinary people. Sure, they may look a bit frail at the beginning, but if they survive long enough they can become legendary heroes - capable of flying, defeating armies, raising the dead, and hiding in mere shadows.

There is something special about D&D characters. As the books often say, not every warrior is a Fighter, not every priest a Cleric, and so on. And what makes them unique is their potential. Adventurers gains levels, and in doing so they can gain the world.

At first, they are weak. An orc or lowly goblin can be deadly to starting adventurers. Barring divine intervention, mostly will fall. But some will survive, and fight on, until they become legends. They will fight ghouls and gorgons, wight and wraiths, oozes and ogres.

And some will live long enough to fancy themselves Dragons-slayers.

But Dragons are something else entirely. The first time they appeared, it was already obvious they were special. Sure, purple worms seemed bigger at first, but Dragons could cast spells, and they got stronger as they aged.

Still, this isn't the most important thing about dragons.

You see, adventurers change. With each new edition, the get distracted by their new toys, their skills, their weapons and spells, their increasing hit points and infinite options.

Yes, they were shunned by all subsequent editions, handbooks and manuals. Treated as mere "monsters" or relegated to an distant habitat, away from the core rulebooks.

It doesn't matter. Dragons know their history. They know their roots. They remember their ancient rights, and are willing and able to defend them. Dragons are hardcore. Dragons are old school. 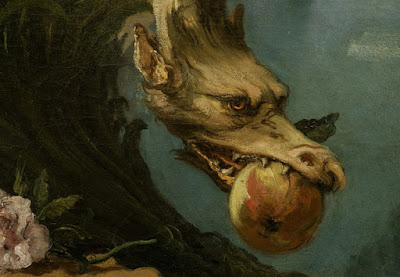 Dragons aren't monsters. They aren't mere "dragons" in lowercase. They are player characters in their own right. It says it right there in the First Volume of the First Game, page 8:

Other Character Types: There is no reason that players cannot be allowed to play as virtually anything, provided they begin relatively weak and work up to the top, i.e., a player wishing to be a Dragon wold have to begin as let us say, a "young" one and progress upwards in the usual manner, steps being predetermined by the campaign referee.
- Dungeons & Dragons (1974)

"Just an example", you say? "Implicit limits"? "Referee's discretion"? This is not how Draconic Law works. Dragons are bound by the letter of the law, not its spirit. And this is what the rules says, on page 18:

There is no theoretical limit to how high a character may progress, i.e., 20th level Lord, 20th level Wizard, etc. Distinct names have only been included for the base levels, but this does not influence progression.
- Dungeons & Dragons (1974)

But don't let this fool you. You aren't playing Hamlets&Heroes, or Forts&Fighters. Dragons were given infinite potential, and no limits. You would think they are hoarding piles of gold, but in ancient Draconic Law, every gold piece is a point of experience. And once dragons get something, its theirs forever.

Because dragons don't change - they evolve.

They have been doing it since 1974. They will never stop.
Postado por Eric Diaz às 8:16 PM