I ran into this adventure when I was looking for something with an old-school feel. If you want to see how that went, take at look at my impressions here. If you already like the idea of playing with multiple 0-level characters, read on. If the adventure seems fun, you can get it here. 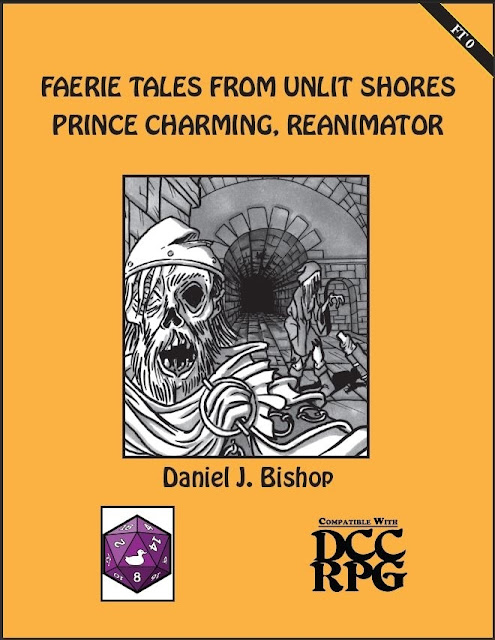 FT 0 - Prince Charming, Reanimator is a short adventure for the Dungeon Crawl Classics RPG, inspired by fairy tales such as "The Sleeping Beauty". I found it to be clever, funny, and fun to play. There is a lot of little jokes in the text, such as Black Sabbath albums, animated brooms, undead princesses, and so on.

It is meant as "funnel" for 16 0-level characters, which means most of them will perish in the process. It can probably be played in a single session if you create the characters beforehand.

The adventure starts with the local prince rounding up some random villagers (the PCs) to explore the ruined castle in which, legend says, a Princess Beauty lies asleep for aeons. The prince, eager to take has a new bride (as his attempts to revive princesses Ella and Snow have failed), will not take "no" for an answer. Villagers that refuse must fight a group of 20 armed guards.

From there on, the adventure is a traditional (and well designed) dungeon crawl through the abandoned castle. The encounters are thematically appropriate and include goblin-like creatures, living vines, faeries with colorful dresses, a dragon made of roses and other plants, and a ghostly wizard that can give more information about the ruins.

Other than actually entering the castle (and not being allowed to leave), there is not much railroading in the adventure, nor is it too linear. There is significant part of the castle that MUST be explored in order to complete the mission, so at least half the keyed areas will be explored, but there are enough optional areas and choices for the players to make.

There are a few magic items scattered through the castle that I found quite powerful for 0-level characters, such as a shield that can always detect lies and an orb that can answer yes-or-no questions three time a day. Things like that can change the nature of a whole campaign whenever mysteries and conspiracies are involved, so the GM should consider this carefully before giving them away, although they are somewhat essential to the adventure itself.

I ran the game using modified TSR D&D system - adapting DCC stats was easy enough. About half the characters died, got incapacitated on ran away before the end of the adventure , although more would die if I used 0 HP = immediate death. All players found the adventure fun but showed no interested in going back to explore the castle further (nor is it the intention, anyway, as the series continues to other locations), even though I felt it would be a cool idea.

I strongly recommended this product for anyone looking for a short, old school lighthearted adventure that will kill lots of low-level characters while still allowing players to have plenty of fun.
* Affiliate links - by using this, you're helping to support this blog!
Postado por Eric Diaz às 10:20 AM