Old school D&D is not great at "character builds". Meaning, you do not get many changes of customization unless you're a spellcaster (oh, well, maybe); other than that, maybe you have a magic item or two. The B/X fighter, for example, is remarkably simple: he gets a few bonuses (on HP, attacks and saves) but NO new features from level 1 to 9 (an no new feature after 9). OD&D and AD&D fighters are similar, but the Rules Cyclopedia and some other supplements at least gives them weapon proficiencies, etc.
Conversely, 5e D&D has LOTS of customization. Even the fighter has about half a dozen choices on level 1, leading to 10-20 variations; other classes may have more. A level 9 fighter can have at least 20 viable "builds", probably a hundred with all the supplements.
Another interesting thing is the level 9 change: from then own, your HP doesn't change much, nor do your individual capabilities (except for spellcasters), but your impact on the world is considerably augmented by your followers.
It is a matter of taste, mostly. For me, personally, 5e has too much customization, but B/X doesn't have enough (although I'd appreciate even less detail in some aspects), so I'm always playing with some hybrid version.
But there are some details that are present in old school D&D and not 5e. For example, level titles (e.g., calling a 5th level fighter a "Swashbuckler", and a "Lord" at level 9; a halfling will eventually be a "Sheriff", etc.). Also, class and level limits for nonhuman PCs (elves, dwarves, etc.). Most importantly, it shows you when and how PCs can become lords of their own armies and masters of their own castles, towers, villages, etc. 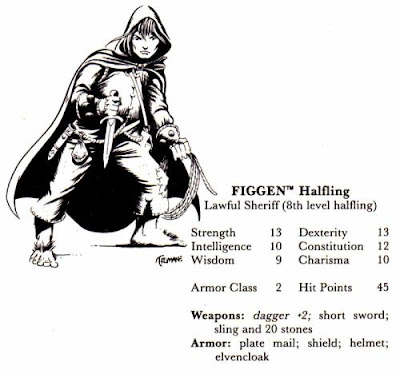 I think this shows a difference of focus between old school and contemporary D&D.
The first is great for worldbuilding, because:
- Characters are easy to create. It's not hard to make a cast of hundreds, even including higher levels, and using the same rules as the PCs.
- Characters have a distinct place in the setting and the social order. The opposite is also true: if you have a village with a Halfling "sheriff", you can guess his stats.
- Nonhuman armies are easily comparable.
The second is great for character building, because:
- Characters are unique and detailed, you can create you "protagonist" any way you want.
- Characters can take the social role they desire, raising an army from level 1 if they can manage, or become a 15th-level lone wolf, etc. (you can do the same in OS D&D, but it encourages you to follow a certain path).
This is not only in characters, by the way. Monster statblocks follow the same logic. Likewise, alignment - once a tool to indicate you faction - is now almost entirely a matter of personal traits. Everything makes worldbuilding easier, while contemporary D&D prefers to focus on individuals.
I wrote about a similar topic a long while ago ("your character isn't special").
Notice that even HP reflects this: some old school games rule that PCs are dead at zero HP, and being knocked unconscious is barely in the rules. For beginning PCs, even wounds are uncommon: you die with one or two wounds. Likewise, critical hits etc., do not need to exist; they are fun in an individual fight, but they are unimportant in the grand scheme of mass battles, etc.
As I've said... Matter of taste, and I prefer an hybrid approach. However, after years of playing different versions of D&D, I find I'm more interested in worldbuilding (and, by extension, creating locations, monsters, adventures, etc.) than character builds, so my interest in modern D&D is dwindling.
An hybrid approach can even enhance worldbuilding, as adding a few unique features to some characters and NPCs makes the setting cooler (and tweaking limitations allow unique settings, e.g., "all spellcasters are dwarves").
And, in short, the OSR is the place where I find this hybrid approach the most. Come to think of it, Dark Fantasy Basic reflects this kind of compromise, which is why I have a hard time replacing it for more strict retroclones. In addition, my players love customizing their characters a bit - but 5e becomes too cumbersome and thy often forget their own special powers before level 10 - so this method seems to be the best for my group.
If I make my next book (whichever it is) perfectly compatible to B/X, I'm very tempted to just create new PC classes that are a bit more complex than existing ones - requiring more XP, of course. So, the world would be full of "fighters", but PCs could pick a customizable "warrior" of sorts, and so on. This way, you could keep things simple for worldbuilding (especially NPCs) while still giving some character builds to your players.
BTW, the Christmas in July Sale is on! Almost all of my books are included in this sale. Check my OSR picks, Classic D&D picks and D&D 5e picks from past sales.
These are all Affiliate links - by using them, you're helping to support this blog!
Postado por Eric Diaz às 8:38 AM