The Wretched Hive, my One Page Dungeon

I submitted a dungeon to the One Page Dungeon Contest. It was a fun, challenging and rewarding experience (more about that soon). There are some AWESOME dungeons this year, as it happened in previous contests. Here is my own, in a blog post format instead of a PDF format so you can easily copy, paste and edit, and have a better view of the map.

The wretched Chaos lord Xalavor and his minions have conquered a temple of the Queen Bee, the ancient lawful goddess of Life, in order to summon, imprison and warp an avatar of the Queen. They used her power to create a fearsome hive fortress over the marble ruins of the old temple, and an army of half-human, half-insect soldiers. Now hybrid creatures roam the countryside capturing riches and people for dark purposes. 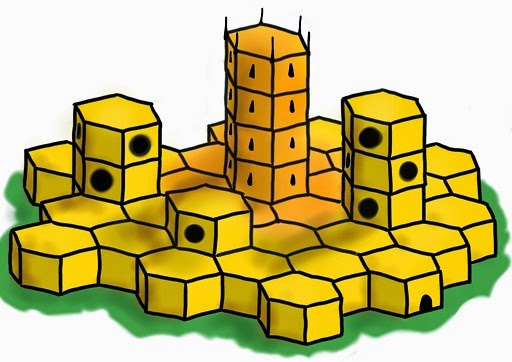 The sacred forest surrounding the temple is now home to the wandering fugitive priestesses of the Queen. If treated with due respect, they may say: 1. Do not hurt the avatar of our Queen! 2. There are hidden amulets in the temple. 3. The hybrids have a spark of divinity, but may be hostile. 4. The Queens’s honey cures wounds. 5. Bees work in the fields during the day. 6. We will send one of us with you!

Approaching the Hive during the daytime may trigger an encounter (1-in-6 chance). Roll once more if the Hive is approached near dusk or dawn, and for every half hour the adventures spend in the surroundings.

The hexes are 50 feet wide and 25 feet high, and reasonably well-lit during the day. They are made of wax and may collapse if hit by a fireball or similar attack. Red hexes are darker and fouler than others, with walls made mostly of stone and metal. Yellow hexes are cleaner and emptier. Blue hexes are littered with ruins of the old temple. Doors leading from white to red or yellow areas are harder to open.

Bee-people, with near-human bodies and bee-like heads and wings, can fly but cannot talk. If they lose more than half HP, they will attack with a stinger, causing double damage and then dying. Soldiers (2HD) will attack on sight, with spears. Workers (1 HD) are unarmed - they will go about their businesses and won't attack unless attacked first. Each has a 1-in-6 chance of carrying honey (heals 1d6 HP, once per day).

The wretched are the evil, sadistic demons that follow Xalavor. They might be willing to negotiate at least half the time. Imps (1HD) are small, ugly, goblin-like creatures. Ogres (3HD) are stupid, demonic brutes with clubs. Biomancers (2HD) are cunning magic-users that create hybrids.

The groups dislike each other, but Xalavor has been able to keep the peace so far (up to a point). 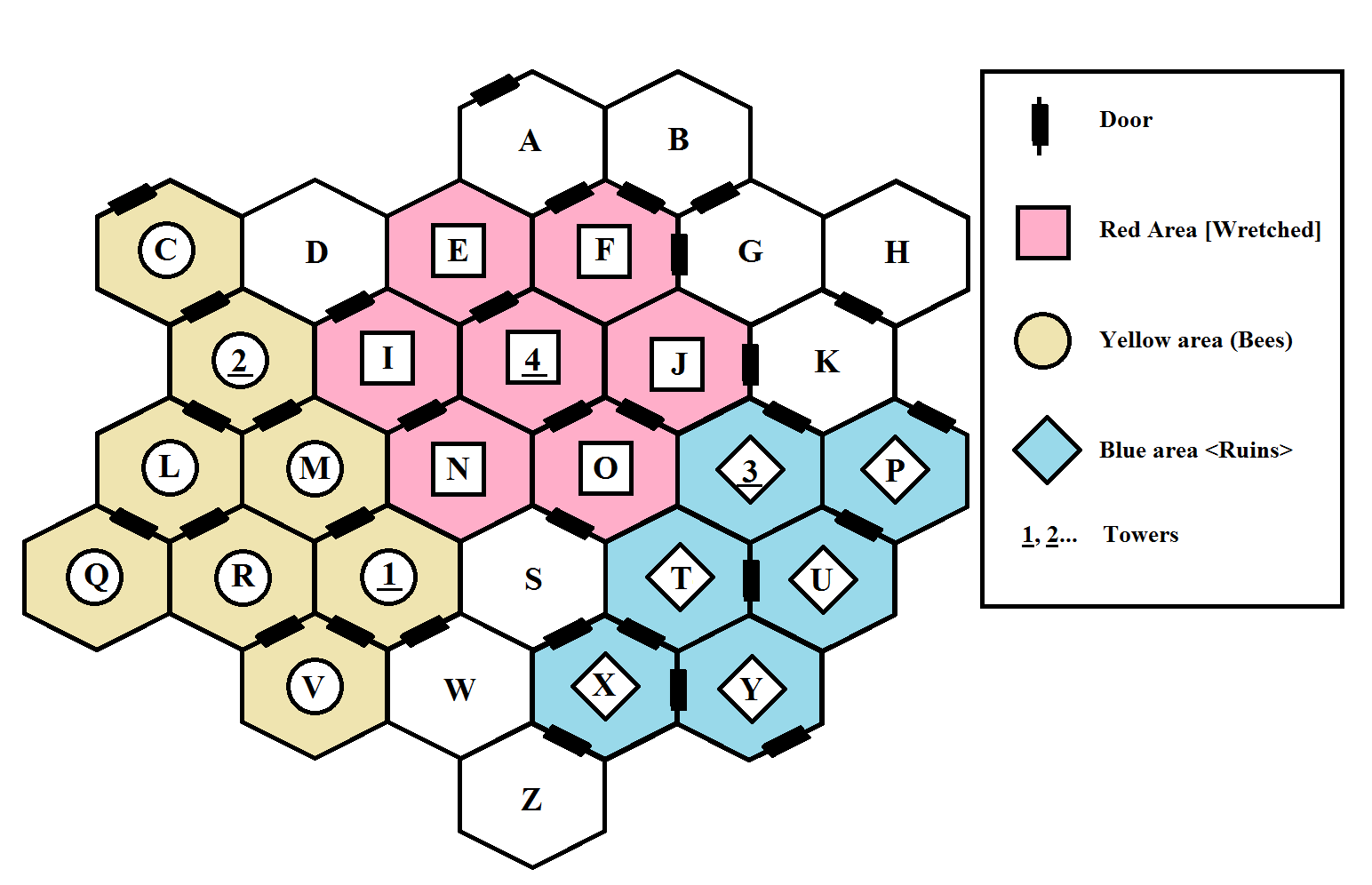 Towers 1 though 3 are bee-people watchtowers. They have 1d6 soldiers per level and doors to the outside. The ground levels have holes to the underground (no stairs). All towers have a number of levels equal to its identifying number.
Tower 4 is home to Xalavor (8HD), that can always be found in the highest floor. There are three archfiends (3HD) with fiery weapons in the third floor.
A. Entrance. 2d6 imps and an ogre will question visitors.
B. Arsenal with many crude spears and machetes.
(C). Entrance. 2d6 soldiers.
D. An alien mass of putrid flesh and tentacles (5 HD) is trapped here. The doors are sealed from the outside.
[E] Barracks. 3d6 imps, half are sleeping.
[F] Mess hall. 2d6 imps.
G. Granary and treasury.
H. A biomancer with 4 mechanical assistants (1HD) keeps an alchemy lab in this hex.
[I] Beautiful artificial flowers in the middle of the room are the trigger to a fire trap that causes 2d6 damage to everyone that cannot duck fast enough.
[J]. Prison with 4d6 human captives.
K. Empty passage.
(L) A chest full of treasure, heavy but somewhat valuable, triggers spears coming from the ground, causing 2d4 damage to anyone standing in the hex.
(M). Empty passage.
[N] Downward spiral stairs lead to the underground.
[O] The arena where the wretched fight captured humans and bee-people. The 4d6 wretched in the audience, will not notice invaders unless attacked.
<P> 6 soldiers protect a fountain of honey. Will not let humans or wretched get near, but won't attack otherwise.
(Q) 1d6+1 mummified animals (wolves, boars, etc), imprisoned by a insane hunter-bee (3HD). One is still alive and can show gratitude if released.
(R) The Queen Avatar (7HD) is a giant bee, entranced by the sorcery of Xalavor, can barely move but is able to defend herself with paws and stinger (her sting causes immediate death).
S. Empty passage.
<T> A telepathic drone-man (2HD) hidden in this hex can communicate with human and bee. He will offer his services for protection (many bees want him dead).
<U> A statue of a maiden surrounded by flowers will heal any sincere allies of the Queen if they pray or ask for help (1d6 HP, once per day).
(V) Floor will collapse if more than 8 creatures are in the hex in the same time (bee-people don't count).
W. 2d6 soldiers guard this room.
<X> Hidden treasure under a secret door in the marbled floor (4 golden amulets, valuable and sacred).
<Y> Beautiful silk tapestries.
Z. A two-headed twelve-armed mutant troll-bee (5HD) sleeps here most of the time. If awaken, it will go on an unstoppable rampage.

The underground is dark and full of demons, biomancers, and breeding pits with larvae and royal jelly. Adventures beware. If the GM prefers the whole dungeon to be underground, just flip the map, transforming towers into pits.

If Xalavor is slain, the bee-people will destroy the remaining wretched. The Queen (now free from mental slavery) will telepathically ask the adventures for death, but she will resurrect (as an ordinary bee) in less than one minute and fly away. The fortress will collapse within 1d6+6 days.

If the Queen dies, bee-people will disperse immediately. It will take Xalavor 3d6 days to summon another avatar or come up with a new use for his fortress.