Variations of the Same Principles - A few house rules for BD&D, LotFP, etc

I am always trying to break the code of BD&D to make it the perfect game for me and my group. It is a never-ending process, but from time to time I come up to something that resembles a "final" version.

So, here is a loose collection of house rules. Nothing ground-breaking, mostly variations of what you already know.

Inspirations: TSR D&D (mostly B/X and BECMI), the OSR (mostly Lamentations of the Flame Princess, obviously), some WotC D&D (mostly 5e). Also, this (Delta), this (Breeyark), this (Links to Wisdom), this (Daniel Sell), this (no idea who the author is, would love to find out), the stuff I linked below, and probably lots of stuff I can't remember.

Some goals: no classes but infinite archetypes, simplicity, quick character creation with enough customization later on, flexibility, compatibly, familiarity and some semblance of balance.

And here we go. 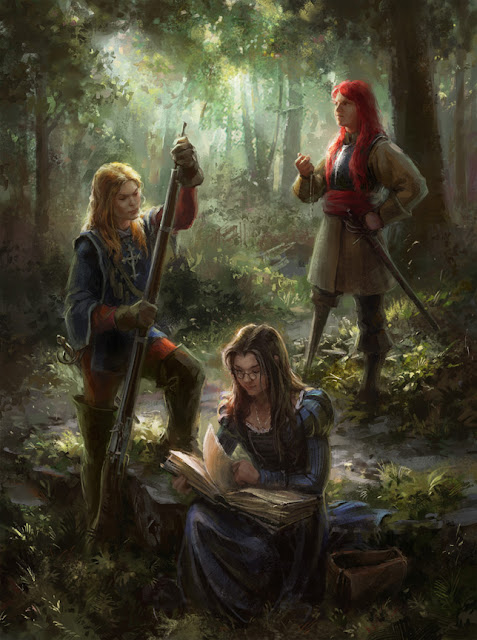 Any character can use any armor, weapon, skill or spell in the game. They can also sneak around and cast spells in armor, at a penalty. No classes, racial restrictions, ability requirements, separate archetypes, etc.

Modifiers: from -3 to +3, as in B/X. Modifiers always apply to skills (see below) as adequate. A 1-in-6 chance of climbing with a +2 Strength modifiers becomes 3-in-6.

Charisma: as usual, plus becomes the main stat for measuring divine favor, luck and influencing demons (if you thought "lawful, neutral, chaotic", you might be on to something; if you tough "paladin, mountebank and sorcerer", you're getting ahead of yourself).

Once per session, you can roll 2d20 pick highest instead of 1d20. After you do that, roll under Charisma; failure means you're out of luck and cannot use this feature again until you level up (or some other period of time).

Intelligence: as usual, plus additional skills (see below).

Abilities are rolled with 3d6 in order. 1st level character get no breaks; if you want to make things easier start at level 3.

Starting characters whose sum of stats (plus special powers) is smaller than 61 can add points freely until they reach 61.

Note: yes, I'm aware that the average of rolling 3d6 six times is 63 - I use 60+level, you can use what you want, of course. I'm considering raising this myself, but I like 1st level characters to be weak.

2 points of skills at level 1, plus Intelligence modifier if positive. Nothing else.

4 HP per level to everybody, plus Constitution bonus, until level 9. Your attack bonus applies to your total HP.

Hit points are a measure of fighting ability; most other things cause Constitution damage. For starvation, dehydration, etc, use the rule of three.

Start with 1in6 chances, as LotFP (use your own little list of skills if you want; I would keep it around a dozen), but ability modifiers are always added to the roll. Choose the adequate ability to each skill, with Dexterity and Intelligence being the most useful ones.

Yes, you can use a d8, d10 or d12 to test skills in extreme cases, but don't overdo it, or you might cause an "arms race" and make competent characters seem incompetent, which is frustrating.

Optional: if you dislike Xin6 skills, try adding using a d20 and adding +1d6 or +3 per skill level. The results are similar, and you don't have to bother with +1/-1 modifiers on the d20  that will only matter 5% of the time.

At least until I can make a complete system out of this...

Attack bonus is a skill (I call it "Fighting"). If you spend 3 skill points you get a +3 attack bonus. It also applies to HP (see above).

Fighting cannot be greater than level.

Note: this might make Fighting the uber-skill, but maybe not. Even if every characters get some Fighting skill, the true warriors will differentiate themselves by having great Strength, Constitution, etc. In any case, it is a problem I haven't seem in my games.

Encumbrance (this is somewhat important)

Weight is measured in stones, each weighting about ten pounds (or one bulky item).

A character can carry up to 1/4 strength without penalty. After that, she gets a -1 penalty to Armor Class, relevant skills, and spell casting (apply to spell level), and loses 1/4 of their movement.

In the unlikely event that wearing armor makes AC equal or worse, the character is too weak to wear that type of armor with efficiency.

Example: a STR 12 character carrying 10 stones of weight has a -3 penalty to AC, skills and spells and loses 3/4 of his movement. He casts level 2 spells as if they were level 5.

Every time you level up, you gain one skill point.

(The idea is that characters with humble beginnings gain more flexibility. You can even go the Dark Souls way and let players decide between starting at level 1, 2 or 3).

The maximum sum of your abilities is defined by the GM (I suggest 75; it is close enough to 4d6 per ability).

If you spend or lose your abilities for some reason, this still counts towards this limits. For example, if you spend two ability points to get some special powers, the actual limit to abilities drops to 73.

After level 9: this is a whole different matter, but use what you already know: fewer HP, Constitution modifier doesn't apply, etc.

I don't care much for the detailed tables of classic D&D. I prefer using a single saving throw, like Swords & Wizardry, combined with optional rules from BECMI and some 5e.

Every character start with a single saving throw of 16, and it diminishes by one point every even level (you can make it once per level, but this way makes it closer to BD&D, specially if you follow the suggestions below).

Add the appropriate ability bonus to saving throws, with Constitution, Dexterity and Wisdom being the most useful ones.

Getting a special bonus against one type of peril (for example: poison/disease, mind affecting spells, etc) is a special feature anyone can get (but only once) in exchange for one ability point.

To be honest, I don't care much for the traditional races or most of their mechanics in BD&D too. You can treat them like everyone else (chose appropriate skills, etc) or use whatever rules you prefer. Here are some random ideas:

* Just give them a different culture, this can be more interesting than bonuses.
* Grant them some additional bonuses to starting characteristics, but the same limits as everyone else.
* Darkvison costs 1 ability point.
* Dwarves move slower but can carry more weight. Halflings have less HP but better AC, or less STR but better chances at hiding.
* Etc.

Since there are no classes, all characters share the same XP progression - the Fighter's, for example. Differentiation between characters is made by their choices.

I am not a fan of big lists of feats, but you could add some simple ones to make more character concepts possible. They would each cost one ability point or one skill point (I'm not sure they are equivalent, but it will work for this purpose). Some examples:

* Use Wisdom or Charisma for your spells instead of Intelligence.
* Add Wisdom modifier to AC, provided the final AC isn't greater than Wisdom (for monks, etc. Barbarian types can do the same with Constitution instead, acrobats can double their Dexterity modifier, etc).
* Saving throws (see above).
* Ignore one penalty (cast spells while encumbered, etc).
* Cleave, bash, extra attacks, extra melee damage... Not sure about this one yet.
* Etc.

Well, this is the hardest one, right? I have a few ideas in my mind right now, but I figure they deserve a separate post. I'll let you with the "classic" one.

Yes, this make MUs look somewhat weaker than other classes, but that is the whole point, since MUs usually can do more with less skills and abilities, and they get frailer, crazier and stranger as they delve into forbidden knowledge.
Postado por Eric Diaz às 6:48 AM