So here is another cool idea by Jeff Rients, which he calls "overclocking damage":

So here's my basic idea: for every 2 points you exceed to to-hit target, bump your die up one size.  If applied to the monsters as well that's going to make it easier for high hit die monsters to mangle the PCs.

Let's see if we can build upon that - I'll use something mathematically similar, but a little more suited for my group.

Forget Jeff's rule for a moment. Use this instead:

Why "4 or more"? I'm not sure about the origin, but for my group a margin of 4 always meant an extra-nice success in most rolls of the d20. Also, the d4 is the smallest die most of us use.

Things are even easier if you use Delta's Target 20 mechanic, because you don't need to worry about subtractions to calculate margins of success.

Well, okay, there is some subtraction but it is still easy, because you always subtract 20 to find the margin.

If fighting multiple (similar) opponents, you can spread the damage dice between them, getting a STR bonus for each separate dice.

A natural 20 does maximum damage. Or doubles damage. Or adds an extra d10. Whatever works.

Still too much math for you? Just ignore all this rules until you roll a natural 20. When you do, everything applies. 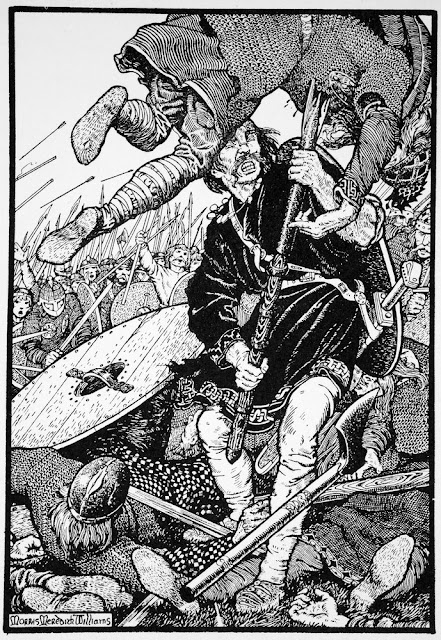 * The Fighter (and everyone else) gets better damage without additional attacks.
* High HD monsters too.
* Weapon proficiency can be made a lot simpler.
* You can do multiple attacks with less rolls.
* Low AC creatures take more damage even faster.
* Fighting skill becomes more important in comparison to STR, most of the time.
* Armor becomes even more important. Or you might just use armor as DR from now on. Of course, some people might dislike both of this ideas.
* Unarmed combat is suddenly more dangerous.
* You can still use this, if you want.
* Backstabbing becomes more deadly even before multiplying damage. You can give thieves a single bonus to attack, instead of a bonus to attack and a multiplier for damage.
* In fact, everything becomes a bit more deadly anyway... which is nice.

Haven't tested it. I'm pretty sure it might work - let me know if you don't think so.
Postado por Eric Diaz às 6:41 PM