A quick post today, inspired by this one. JB's classification is more straightforward than mine; I would like to detail it further, although many examples below would fit in his 4 categories. 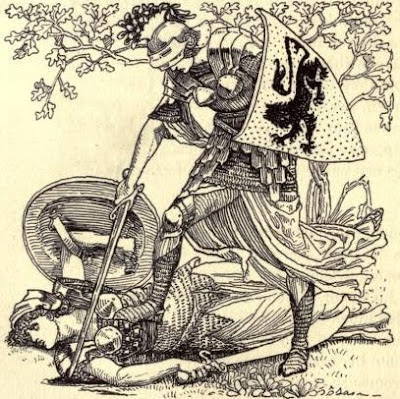 So, do you need an alternate rule for armor in D&D? Here is what armor can do for you in different games, specially D&D and similar.

1 - Armor Class - Makes you less likely to be hit (example: traditional AC, as seem in  classic D&D).
2 - Damage Reduction - Reduces damage dealt to you (example: this and lots of other RPGs).
3 - Damage Division - Divides damage dealt to you (example: resistance in D&D 5e).
4 - Damage Conversion - changes damage from one type to another; slashing to bludgeoning, etc (example: GURPS does this IIRC).
5 - Ablative armor - Gives you extra HP (example: The Black Hack).
6 - Free pass - gives you immunity against one or more attacks, regardless of damage (example: shields shall be splintered, Fate).
7 - Life-saver - allows you a saving throw against damage (example: WHFRP, see JB's post).
8 - (Low) Damage Threshold - ignore damage up to a point; for example, armor 3 would completely protect you from 1, 2 or 3 points of damage, but if you take 4 points it isn't reduced (example: Dragon Warriors uses a reversed version of this, I think).
9 - (High) Damage Threshold - protects you against damage after a point (example: I have never seem this used, nor do I think it is a good idea, but I had a house rule in OD&D that used exploding d6s for damage, unless you were using a helmet).
9 - Critical protection - protects you against critical hits or make them less deadly (Rolemaster)
10 - Damage immunity - fully protects you from some types of weapons or special attacks (haven't seem it in a game, although it might be "realistic" in some cases, or might be caused by damage reduction - the fight of Sir Barristan against a Dothraki in ASOIF comes to mind). 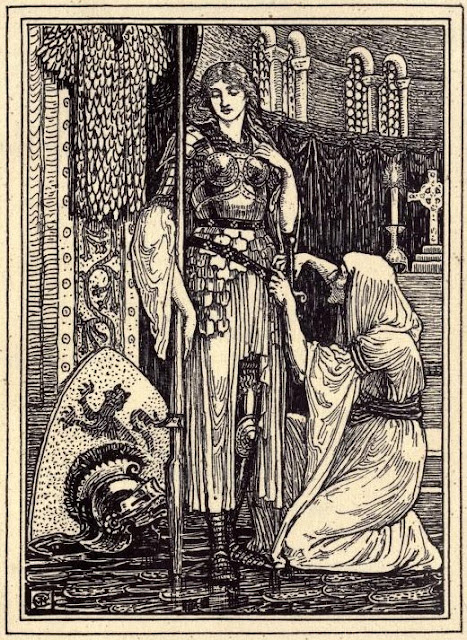 ... but if armor is so useful, why isn't everyone using it? 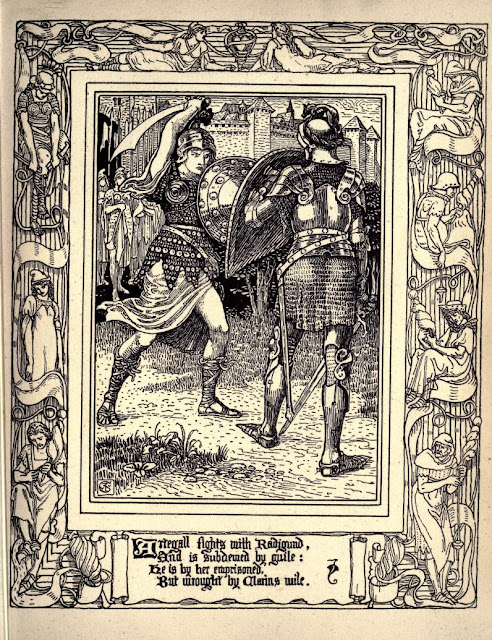 There is still lots of possibilites around... Attacking hard armor bare-handed hurts your hand in GURPS, and rigid armor stops arm locks, among other things. More exotic ideas would include spiky or fiery armor that damages opponents, mirror armor to confuse foes and fight the medusa, mechanical or biological armor, etc.

What did I forget? Let me know in the comments!

BTW: Do you like any of these? Or some combination of them? Consider writing it down in one single page. The images in this post are on the public domain in the US, as far as I know, so you can use them if you want (the artist is Walter Crane).
Postado por Eric Diaz às 8:38 PM