The Inverted Skill Roll (and Static DCs): fixing randomness (where none should be)

Although this post isn't about Basic D&D, specifically (it might be useful for ANY role-playing game), I want to begin with a side note: I'm reading BD&D for the hundredth time, and Moldvay never ceases to amaze me in how concise and to the point the book is. I wish more RPGs were like that.

Pick pockets is even better.﻿ In a short paragraph, it explains that the DM makes the roll, the thief has a change of being caught, and that the victim will react in accordance to GM's decision and the reaction table.

One of the downsides of the "d20 skill roll" that modern D&D (including 5e) uses is that it doesn't work (see my reasoning here; and also here). Alas, 5e makes it even worse with bounded accuracy.

Basically, that situation where the hulking fighter fails to break down a door only to see the wizard roll well and succeed happens too often. It also makes "trying again" a very tempting and effective solution, since the difference between two subsequent rolls are very often 10 or more (the key here is "very often", which doesn't happen with 3d6, for example).

But this isn't a problem of them d20 roll only: it can obviously happen with a d6, 2d6, 3d6 or any other variation, albeit less often.

This should be determined by the GM in a case by case basis, of course; but some cases are so common that clear rules become, if not a necessity, at least incredibly useful.

Such is the case with picking locks and forcing doors. 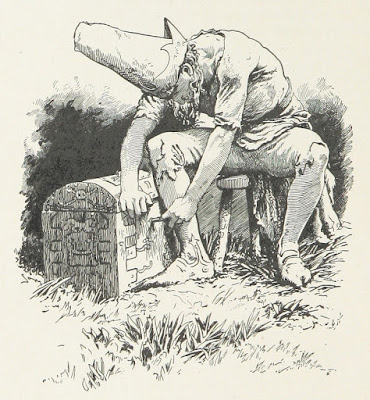 So, for a quick solution that - dare I say it? - may even better than Basic D&D (depending on your tastes, of course), try this inverted skill roll: for stationary objects, the GM rolls the dice, and the results never change (because the object doesn't move).

For example, if a regular person has 2-in-6 chance of forcing a door open, and the GM rolls a 2, anyone without a Strength penalty can open it. If the GM rolls a 5, you would need a +3 bonus to open it instead. There is no rolling again; if you lack the required Strength, you are simply not strong enough (you might get a +1 bonus with a crowbar, etc).

Alternatively, roll 3d6-2 to find out the door's Strength; if you roll 11, any character with Strength 11 or more can open it.

The same applies to lock-picking; if you want to use a d100 roll, like Basic does, and the GM rolls a 53, the thief will be unable to open it until level 7.

The DM doesn't have to roll for every object; ha can just pick a number when building the adventure. "This is a Strength 14 door, this is a quality 37 lock, this is a Intelligence 15 information", etc. 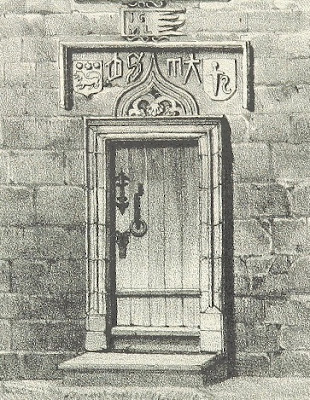 This doesn't apply to contested rolls against other creatures such as hiding or picking pockets. It might apply for such contests where no risk or randomness is involved: the Strength 15 girl IS stronger than the Strength 6 guy, all the time, and will ALWAYS win in an arm-wrestling contested unless duped, cheated, etc. A combat is a different matter; the Strength 6 guy may be quicker, more experienced, better armored, etc.

However, this DOES apply to knowledge checks, if you use them. The smart wizard will ALWAYS know that bears live in forests and caves (which is not the case for most characters in 4e, as you might remember), and the merchant will ALWAYS know the approximate price of a common item (again, not necessarily the case if you use 3e's rules). 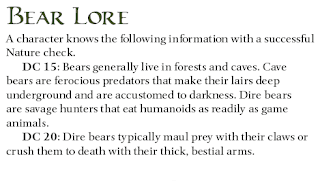 As an alternate solution for modern D&D, I offer you the Static DC (or sDC): When you are testing a skill that doesn't rely on luck (which is often the case against an stationary object), you do not roll; the result of the d20 is always considered to be 10 ("take 10"). So if a challenge has sDC 15, it means that the DC is 15 and you cannot roll against it; you take 10 and automatically succeed if you have a +5 or greater bonus, automatically fail if you don't.

UPDATE: It has been brought to my attention that someone had that idea a long while ago. Oh well...
http://www.knights-n-knaves.com/phpbb3/viewtopic.php?f=9&t=6641
Postado por Eric Diaz às 1:14 PM