Just finished reading The Wendigo, by Algernon Blackwood. I can't exactly remember why I downloaded it, but I'm glad I did. This is awesome stuff. There is little point in reviewing a short, public domain book that is over a century old. Just go read this thing.

Or scroll down for the monster already!

But if you want my opinion, Blackwood succeeds in creating a marvelous atmosphere out of the somewhat predictable plot (well, it is predictable nowadays) of  four hunters entering the uncivilized lands in search of moose but finding... something else.

Blackwood's prose compares favorably to Lovecraft's, in my opinion, and although this monster is less alien and incomprehensible than the Mythos' deities, the author nevertheless manages to put an exotic spin on it, using the Wendigo as the representation of men's natural impulse to go back tot he wilderness, which gets called out by a character:

"The legend is picturesque enough," observed the doctor after one of the longer pauses, speaking to break it rather than because he had anything to say, "for the Wendigo is simply the Call of the Wild personified, which some natures hear to their own destruction."[...]"for the Voice, they say, resembles all the minor sounds of the Bush—wind, falling water, cries of the animals, and so forth. And, once the victim hears that—he's off for good, of course! His most vulnerable points, moreover, are said to be the feet and the eyes; the feet, you see, for the lust of wandering, and the eyes for the lust of beauty. The poor beggar goes at such a dreadful speed that he bleeds beneath the eyes, and his feet burn."

But the monster is not only a metaphor, as the hunters will soon find out, although it never becomes one hundred percent "real", either, even as characters disappear or fly through the sky. Witnesses are unreliable (it is no coincidence that the main victim is described in the first chapter as  "deeply susceptible [....] to that singular spell which the wilderness lays upon certain lonely natures"), smells are faint, mutation is quickly covered by a blanket, traces disappear in the snow, a doctor mentions suspects of collective hallucinations, etc. The monster is never fully seem or described.

The Wendigo stays in a dark  zone between reality and wilderness-induced madness, between prehistoric beast and forgotten superstition:

Something that had survived somehow the advance of humanity had emerged terrifically, betraying a scale of life still monstrous and immature. He envisaged it rather as a glimpse into prehistoric ages, when superstitions, gigantic and uncouth, still oppressed the hearts of men; when the forces of nature were still untamed, the Powers that may have haunted a primeval universe not yet withdrawn. To this day he thinks of what he termed years later in a sermon "savage and formidable Potencies lurking behind the souls of men, not evil perhaps in themselves, yet instinctively hostile to humanity as it exists.

The Wendigo of this story is not a threat to the body, but to the mind and soul. Which is why I think this cover (by Matt Fox) is better than most depictions of the Wendigo that you can find online, as it shows the monster as something more than a dangerous beast: 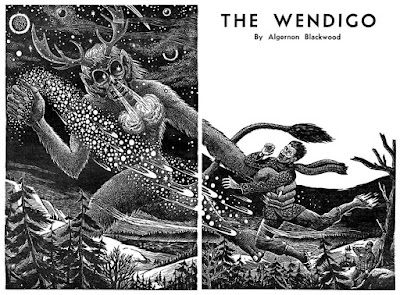 In short, if you like Lovecraft, chances are you'll love this story; it certainly feels like a precursor of the monster as an unimaginable horror that cannot be fully understood by the human mind without risking insanity. But don't take my word for it:

Less intense than Mr. Machen in delineating the extremes of stark fear, yet infinitely more closely wedded to the idea of an unreal world constantly pressing upon ours, is the inspired and prolific Algernon Blackwood, amidst whose voluminous and uneven work may be found some of the finest spectral literature of this or any age. Of the quality of Mr. Blackwood’s genius there can be no dispute; for no one has even approached the skill, seriousness, and minute fidelity with which he records the overtones of strangeness in ordinary things and experiences, or the preternatural insight with which he builds up detail by detail the complete sensations and perceptions leading from reality into supernormal life or vision. Without notable command of the poetic witchery of mere words, he is the one absolute and unquestioned master of weird atmosphere; and can evoke what amounts almost to a story from a simple fragment of humourless psychological description. Above all others he understands how fully some sensitive minds dwell forever on the borderland of dream, and how relatively slight is the distinction betwixt those images formed from actual objects and those excited by the play of the imagination.
[...]
Another amazingly potent though less artistically finished tale is “The Wendigo”, where we are confronted by horrible evidences of a vast forest daemon about which North Woods lumbermen whisper at evening. The manner in which certain footprints tell certain unbelievable things is really a marked triumph in craftsmanship.
- H. P. Lovecraft, Supernatural Horror in Literature

If you came here looking for a 5e D&D monster, here are some ideas.

We will call it "Wendigo, Blackwood", because, frankly, its too good to pass, but you can call it "Wendigo, Burning Feet" if you prefer (and you can keep the "traditional" Wendigo in your world too). There is no need for stats - you can find some online easily, or come up with your own. What this story has to offer is a different view on the Wendigo, one that doesn't rely on cannibalism and the taboos that surround it (if you want to read about cannibalism and devouring spirits, try this awesome post), but on guerrilla tactics and "the call of the wild", that may have powers such as this:

Call of the Wild. The Wendigo is more enticing than scary. It lures lost travelers not to eat them, but to transform them in companions. A victim that sees the Wendigo up close (100 feet) or feels its curious scent must make a Wisdom saving throw or be charmed, following the Wendigo wherever he goes.

Burning feet. The Wendigo is increasingly fast for its size (speed 80 feet), and not only on the ground - it can jump or fly through great distances (fly speed 40 feet). Victims that fall under its spell gain the same ability, although it hurts their feet so much that they constantly cry and complain about the pain. These agonizing cries will cause fear to everyone nearby (unless they save against fear), discouraging allies to go looking for the victim.

The creature's strategy is enticing a single victim and running away, which can cause obvious problems to the party. Once the victim follows the Wendigo beyond sight, it enters a battle of will against the call of the wild. Use the three strikes rule, with a new save every day. The victim has advantage if its allies manage to tie him down or remind him of the upsides of going back home, but people who come in contact with such a cursed person must also make a saving throw with advantage.

Every successful save allows the victim to spend a day running back for his allies (the Wendigo will not follow at this point), while every failed save (including the first one) causes 1d3 levels of exhaustion (one level with a successful Constitution save), but without affecting speed. The process is not over until the victim manages to break free and go back to normal (three success), becomes a Wendigo (three failures), or dies of exhaustion.

By this point you must have realized that having a cursed victim in your camp is almost as bad as facing the creature itself!

By the way, the Wendigo will only fight in some rare circumstances (cornered, attacked in its lair, unable to move, incapable of enticing anyone in the party, etc.). It is big, strong, and has several immunities and resistances (cold, fire, necrotic, charm, etc). The most effective way of fighting it might be hacking it to pieces, for a change. Good luck with that!
Postado por Eric Diaz às 1:21 PM