One Page Hacks: Character classes and skills (B8)

Rewriting page B8 was a lot more challenging than I thought. I wanted to add a functional skill system, to B/X, and thought "streamlining" all skills would make it short. Well, not quite.

B8 has a LOT of good ideas in a single page (as it often happens in this book) - specially considering it has a lot of white space.

A simple rule about trying again, under "open locks" (here are some thought on the matter).

Rules for critical failures, under "pick pockets" (here are some thought on the matter).

Rules for allowing the GM to roll in secret, under "move silently" and "hide in shadows". Not my cup of tea but might be useful, so I've included it. 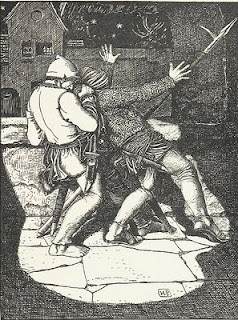 From these simple rules, it is possible to extrapolate a complete system, including all the stuff that is NOT on Basic but I still use in my games.

Everything is a skill now, including Combat, Turn Undead, Backstabbing, Spell-casting... Each class has its own special skill. No races here; I'll add them somewhere else.

I've had a hard time with the Thief, because it seemed he should have stealth, athletics, back-stab, perception... Ultimately I just used Thievery for everything and removed Athletics from his "mandatory" skills (he'll have Perception and Combat as secondary skills), so the only way you can have a thief-acrobat or mountebank is through some kind of feat or background.

The coolest thing? The numbers make sense! They are not exactly like Basic, of course, but I've decide to give the thief a boost, which I think is adequate. But the percentages and progression are not that far from the original.

Fighters, on the other hand, have nothing but combat as a mandatory skill (notice his BAB is way stronger than in Basic), so you can create rangers, thugs and paladins through skills and feats.

The XP table is unified.

Anyway, here is my version of B8.