In the "old school" versions of D&D, gold was the main way to get XP. Monsters would give you some XP, but most of your experience would come from treasure. This encouraged going around monsters, parlaying, etc. Modern versions of D&D usually make killing monsters the most important way of getting XP, which makes PCs monster-slayers and a greater part of the game to revolve around combat.

One popular house rule for old school games is making spending gold, not acquiring it, a source of XP. This justifies some sword&sorcery tropes like the carousing barbarian who is always broke.

Another source of XP in some versions of D&D is "good role-playing", i.e., accurately playing your character's personality gives you extra XP. This is often tied to alignment. For example, a good cleric might spare bandits and gain XP because of that. Whether this is a good idea remains a heavily debated topic - one downside is that it makes the DM pass judgement on the characters actions, and leads to endless debates about alignment.

In my game, Dark Fantasy Basic, for example, there are several ways to gain XP, each with its own special rules: treasure, monsters, surviving extreme risks, and achievements (making an impact upon the world) - but no extra XP for "good role-playing".

One way to avoid judgment and debate is making these XP prizes objective and automatic. Jeff Rients has some awesome ideas for that, and I feel that they could be expanded in a complete XP system that would make alignment relevant but not constraining.

Let's give it a try. 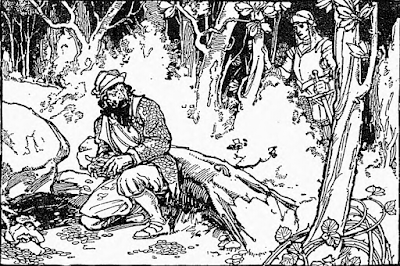 For example, using some of my Dark Fantasy Basic categories as guidelines:

A more interesting take on that would be giving each adventures or session some extra XP that would vary according to the groups' choices. For example, in the end of an adventure, the PCs have the option to give the relics they found to the nearby church, sell the to the highest bidder, or desecrate them in a bargain with darker powers in order to gain new spells. The first option would give XP to lawful PCs, and so on.

This would encourage - but not force - PCs to associate with people who have similar goals and worldviews.