If you've been reading this blog for a while, you might know my favorite editions of D&D are B/X and probably 5e, but I like to take ideas from all editions. Also, you might know I write a lot about "5e weapons", and not as much about weapons in an old-school context. But now I'd like to take a brief recap of melee weapons through D&D editions (if you play 5e, take a look at my book at the end of the post).
In all editions of D&D, weapon proficiency is determined by class; so, a fighter is always good when fighting with a sword, while a wizard is bad at swordplay or incapable to use a sword (an idea I dislike).

OD&D (1974) had little differentiation between weapons; all weapons deal 1d6 damage. The main distinction is in magic: swords are not better than, say, axes, but magic swords are a lot more common than magic axes, with give fighters an edge (hehe).
Notice, however, that Chainmail did include a weapons versus armor table, making some weapons more efficient than others, especially against some kinds of armor. Here is a good post on the matter. It was a really interesting and well balanced system.
The Greyhawk supplement (1975) would include variable weapon damage: daggers deal 1d4 damage, swords 1d8, etc., and different damage against large opponents.
In Holmes (1977), all weapons still do 1d6 damage... But included this bit:
Light weapons such as the dagger allow two blows per round. The heavy two-handed sword, battle axe, halberd, flail, morning star, and most pole arm can be used only once every other round.
Which means daggers are four times better than two-handed swords, in addition to being cheaper and lighter, with no apparent downsides. But Holmes refers to AD&D for more detail...
And AD&D (1977) had very detailed weapons, as you can see below. weight, length, space required, speed, variable damage and a different damage against Large opponents. There was also another table for weapons versus armor. 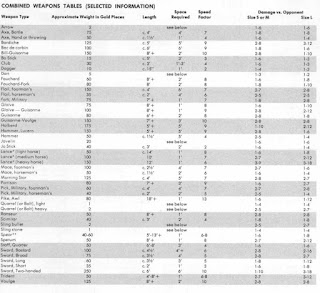 This was probably too much - if I remember correctly, Gygax himself didn't use these tables, although I cannot find the original source for this claim.
B/X (1981) included variable damage as an optional rule, but not much more than that. You could say this simpler method, where weapons are mostly defined by damage, weight, cost, and use (missile, thrown, two hands, etc.) but usually have no explicit difference against armor types, would become the usual method in the WotC era. Some weapons are slightly better than others, but they are a bit more expensive, and so on.
Unearthed Arcana (1985) introduced "weapon specialization" to AD&D, and here at least we've got the relevant Gygax quote:

It was a somewhat ironic addition, because back in The Dragon #16 (July 1978), in a much earlier Sorcerer's Scroll, Gygax wrote, "There are a number of foolish misconceptions which tend to periodically crop up also. Weapons expertise is one. … For those who insist on giving weapons expertise bonuses due to the supposed extra training and ability of the character, I reply: What character could be more familiar and expert with a chosen weapon type than are monsters born and bred to their fangs, claws, hooves, horns, and other body weaponry?"
(source).

AD&D 2e and the RC/BECMI had their own systems for "Weapon Mastery" or "Weapon proficiency" to allow characters - especially warrior types - to specialize in certain weapons and wield them more effectively, and also use special maneuvers such as trip, disarm, etc. (I think they were introduced in Oriental Adventures

Such mechanics are double edged (pardon the pun). On one hand, they provided a much needed boost  of power and variety to warriors. On the other hand, they add complexity to a class that could be played in a more simple way. They also encourage warriors to forgo new, interesting weapons that they've found while adventuring (say, a +2 fire halberd) in favor of those they are proficient in, and discourage other classes to fight creatively (no tripping, disarming, etc. if you're not proficient). Here is one interesting critical look.
3e/Pathfinder kept detailed weapons. It had a decent grip on weapons, IMO. The "Weapon Focus" bonus is small enough to make it irrelevant if you find a magic weapon, and most maneuvers can be attempted by anybody, although they will only be optimal if you have the right feat (and fighters get more feats). Each weapon is better for something different (better critical hits, better against big opponents, etc.).
Unfortunately, that level of detail, in an already complicated system, might have generated enough dissatisfaction to cause WotC do dial things down in 4e and 5e.

4e also had a very good weapon system. Simpler than 3e, but each weapon still has its benefits and special maneuvers. It also had "weapon groups", so that being specialized is "maces" would also benefit you while using clubs, greatclubs and morningstars, for example. 4e falls on the "you cannot do that if you don't have the feature" trap - but that is a design intent of the whole 4e system. Overall, I really like 4e's weapon system - probably my favorite in modern D&D.

5e has good intentions (weapons are varied, you need feats to make the most of them, anyone can attempt maneuvers, etc.) but it made the system too simple IMO, with huge gaps - there is no reason to use a trident or mace, for example. It also managed to throw lots of good ideas regarding weapons in the garbage.
There are not that many different weapons, except for magic weapons - like it was in the days of OD&D. New weapons are rare and not necessarily balanced (the yklwa from Tomb of Annihilation comes to mind).
Most weapons are defined by feats - you have feats for archers, for heavy weapons, for dual wielding, for polearms, and now a feat for slashing weapons, another for piercing weapons, etc. These are mostly well made - altough I think weapons should ahve more differetiation without the need of feats.


I mentioned Pathfinder 2 here - I like he way it deals with weapons; it seems to have the right amount of detail, but I've never played it.
---
So, this is basically my brief history of the evolution of weapons, from old school D&D to modern D&D. Now, if you want to know about my favorite methods...
For OSR games, I like variable weapon damage plus some discreet weapon traits. Longer reach for a spear, maces are better against armor, etc. One trait per weapon is enough. Yes, the sword is probably longer than an axe of similar weight... but while it might make a difference in real life, it becomes negligible when you're fighting a huge dragon.
This is exactly what I used in Dark Fantasy Basic, of course. It is about the level of detail I intend to use in my minimalist 5e games.
For Fifth Edition games, well, the system is decent enough - it only needs a few tweaks, corrections and additions. As you might know, I wrote a whole book about the subject! It is my 5e Manual of Arms: Weapons, which you can find on DTRPG (check the link).
The tweaks are quite small - I changed half a dozen weapons, added three or four new weapons (that are really needed, IMO). The rest of the book is analyzing weapons and ideas for creating your own. If you have been following this blog for a while, you've seen my ideas about weapons already.
And if you want to add a little detail to your D&D weapons, the book is worth checking!
Postado por Eric Diaz às 7:21 PM